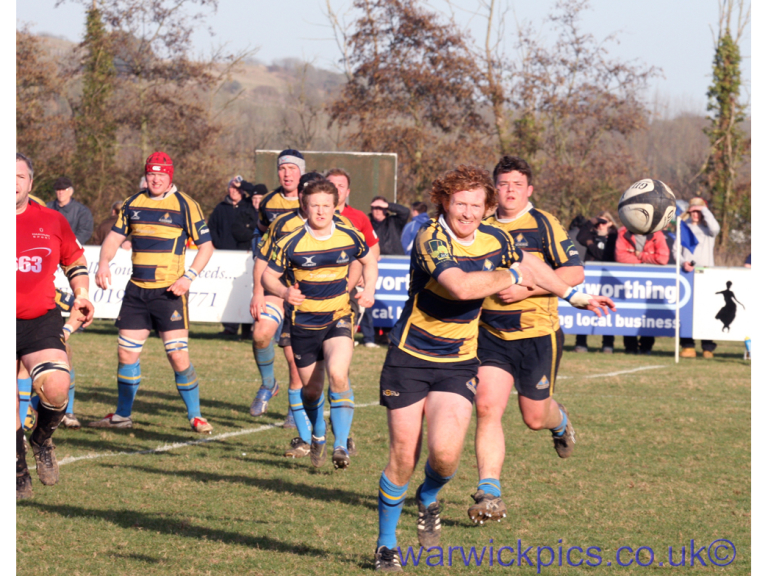 A dry and sunny day at the rugby park with visitors Canterbury, traditionally a difficult team to beat. Raiders kicked off towards the Nursery End into a not insignificant head wind which the visitors used to good effect in the first half.

First points to Worthing though when Kiba Richards jinked through a static defence to release Matt Farnes wide on the left and he paced to the line. Score 5-0 on 4 minutes. Worthing were missing out at the line outs but forced their way into the visitors’ half near the posts and Canterbury offended at the break down. Worthing chose to scrummage which was vindicated as the good quality ball enabled Joe Govett to feed Sam Hewick for the score. Matt McLean duly converted. At 12-0 a solid start for the home side and the prospects looked good. Canterbury responded quickly and their bustling forwards started to influence the play with flanker Peter Kelly always in close support.

A long kick out of defence by them took them deep into the Worthing half. The defence failed to kill the ball and the onrushing forwards drove to the line for a try by second row Christopher Hinnkins. Soon after the restart another long kick out of defence into the home right corner allowed the visitors to steal the line out. Willem Baars slotted through to score the try to make it 12-12 on 19 minutes and the mood of the game had changed. Worthing gradually regained control and, with the scrums going well, Joe Govett moved the ball to the right and the swift