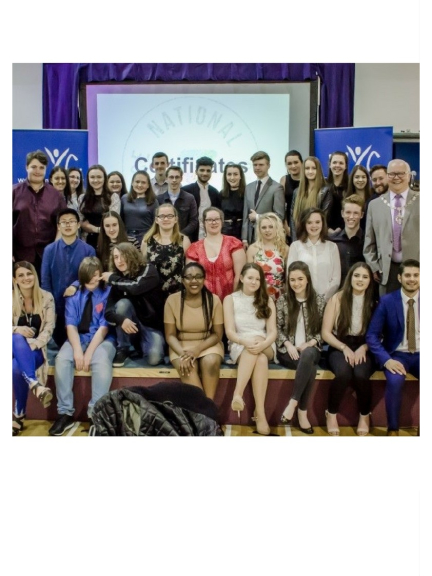 The Graduation was the culmination of a six week programme that involved an outdoor residential, community days based in Warrington and then the young people managing and delivering their own social action project.

The Graduation was attended by NCS graduates, their families and friends and people who had delivered sessions and supported young people on their NCS journey. We were also very honoured to be joined by OnSide Warrington Youth Club Board members and Deputy Mayor of Warrington Cllr Les Morgan.

Chief Executive Officer Dave McNicholl formally welcomed guests and talked about the history of OnSide Warrington Youth Club. He also discussed how incredible the achievements of the young people were especially in light of the often negative press around teenagers. NCS Manager Phil McNicholl then briefly talked about how the NCS programme ran before handing over to two young people to talk about their residential. Liam and Matthew talked about how great the residential was, especially the activity staff and the food!

Five young people then spoke about their community days, mentioning the extremely powerful and inspirational talk from Adrian Derbyshire about overcoming challenges and mental health. In addition, they also spoke about the first aid sessions, sexual health sessions and workshops with Geoff Kershaw regarding confidence boosting.

Each group then got the opportunity to talk about Social Action project. The ‘Bacon Bananas’ did a presentation about how the supported Verve Place, accommodation for young people. They told us about how they delivered cooking lessons for residents and built links to improve their gym. ‘Bacon, Leeks and Vegans’ then told us about their work rebuilding the gardens at Warrington General Hospital for patients and the ‘Big Family’ gave a presentation about their work around raising awareness of Autism and working with OnSide Warrington Youth Club to deliver sessions.

Whilst all three projects were different, what shone through was the passion and dedication that the young people poured into their chosen projects and the confidence and pride in talking about what they had achieved and how they had helped people.

After the presentation of certificates from Andy Gatcliffe, Chair of the Board of Trustees and Deputy Mayor Cllr Les Morgan, the ceremony came to a very special part of the evening where one young person spoke about their NCS Journey. Joe Worthington very bravely spoke about how his Autism meant that he had always struggled to fit in and make friends. Joe said that he was often very lonely but this all changed on NCS, Joe said  that making friends and “getting involved with what they were doing made me feel so special, and above that made me feel wanted."

Joe powerful speech was followed by Andy Gatcliffe and Kath Pollitt, OnSide Warrington Youth Club’s Head of Youth Work who spoke about the future of the organisation and the progression routes available to the graduates.

Phil McNicholl brought the evening to a close with message of thanks and a montage of photos from the programme followed by, the now famous, Jasper’s hog roast!

The NCS team are now recruiting for the summer programme open to year 11 students. For more information, please contact the NCS team on 01925 574 786.

FIVE NEW APPRENTICES START THEIR CAREERS AT REDROW
Sign up for offers
Sign up for what's on guide
Popular Categories
By clicking 'ACCEPT', you agree to the storing of cookies on your device to enhance site navigation, analyse site usage, and assist in our marketing efforts.
For more information on how we use cookies, please see our Cookie Policy.