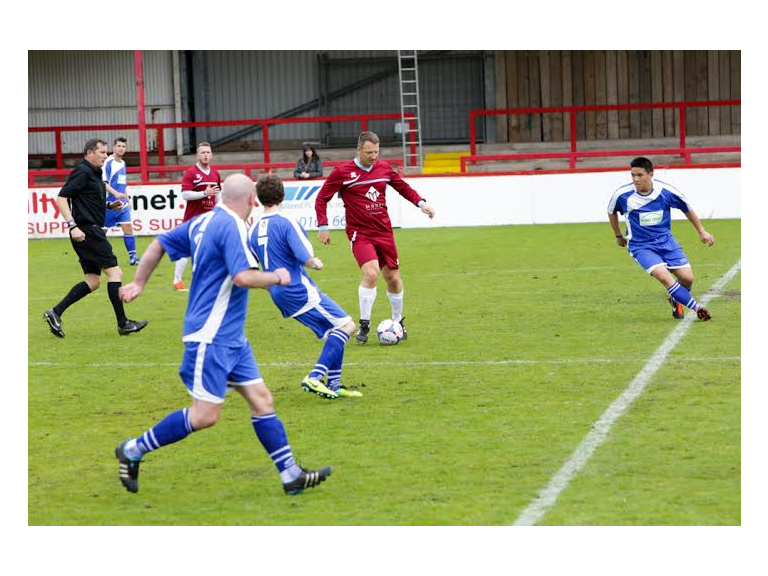 Despite the early morning rain and the grey clouds, people came out to show their support for the two teams and enjoyed a great afternoon of football, fun and banter. Even the Mayor of Trafford, Councillor Dylan Butt, turned out to open the event and meet the players and charity representatives on the pitch.

The charity held a cake stall with delicious charity and football themed cakes that were donated by supporters, as well as other family related stalls. During the event there was a children’s half time penalty shootout, a raffle with some amazing prizes donated by corporate sponsors and local businesses, and the charity mascot, Little M came along to meet the crowd and help out in goal!

After 90 minutes of play, great player banter and action, the game came to a close with the legends team victorious, claiming a 6-5 triumph over the celebrities.

Lee Martin was presented with the winning trophy by the Mayor of Trafford at the end of the game and the various personalities met the crowds and signed autographs before the celebrations began.

Throughout the game, spectators voted for their favourite player of the match via the Foundations twitter address, which was clinched by Neil Clough who had been a force to be reckoned with on the pitch, showing his competiveness and football skills. Neil was presented with a player of the match trophy by the charity’s chairman Nigel Garner.

The Moore Foundation is a charitable trust based in Cheshire and provides financial and practical relief to local children’s charities and worthy causes. The Foundation was established in 2005 when it was noted that suitable funding was slow to reach the smaller charitable organisations in the region, as well as many disadvantaged and disabled children being found to have unsuitable support equipment and treatment.

Nigel Garner, Chairman of the Moore Foundation says “The event has been so well received and supported by the many players, our champions, local and affiliated businesses, as well as those associated with Altrincham FC. The match was so exciting and fun to watch with the quick wit of Alan Keegan, and we’ve been overwhelmed with the media and public support we have received in the run up to the game.

Last year the celebrity team defeated the legends so a rematch could be on the cards in 2015!

On behalf of everyone from the charity and the beneficiaries of the fundraising efforts, I’d like to thank everyone who contributed towards the day and made it the success we hoped for. ”

Owner and Business Development Director at The Best of Warrington & The Best of Cheshire.

Love to support, market and promote the best, recommended local businesses, events, organisations and much more!