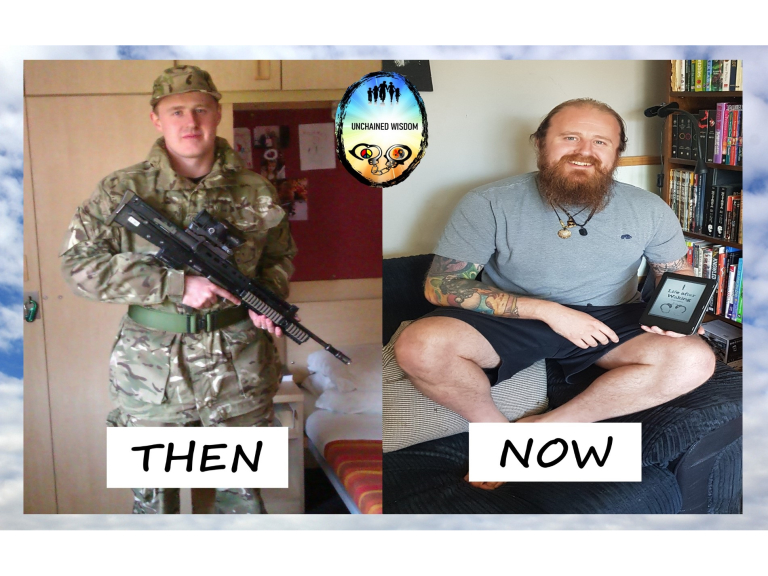 Ellis Robinson Aka Ellis Unchained, joined the Mercian Regiment in 2012, serving in op Herrick 19 in Afghanistan, just before leaving the army in 2016. It was at this time that Ellis’s mental health conditions began to get the better of him, leaving him bed bound. Upon leaving the forces, Ellis began attempting to fit back into civilian life in Willenhall. Facing the harsh reality of the lack of support, and unable to understand what was happening to him, one morning in June 2019, he left home to end the chaos of his mind. Thankfully, something changed, and he returned home with a poem, and not an empty suicide note. The poem, was a realisation that love, care and forbearance, were there all along, within his wife and children. They were just hidden under the darkness Ellis had felt throughout his life. From that day, the words and poems started to flow from Ellis, like he had been possessed by Walt Whitman. He finally began to trust people again, and fate has bought him across a few special people, people who he didn’t believe existed, who kicked him up the behind and sparked a fire within him.

After finally speaking out and asking for help, Ellis was put in contact with Dr Helen Brown, of the Birmingham’s Veterans mental health Service. They collaborated and she allowed him to take charge of his own treatment, which is really paying off. To date, Ellis has left the mental health service, and feels confident that he can keep making these wonderous leaps to recovery. This has allowed him to do something he never believed possible, prepare for university in October, to study Philosophy and psychology, hopefully under the Veterans Scholarship program.

In the short time since being discovered by poetry, Ellis has performed with some amazing poets from all over the country, even the world. Including Staffordshire Poet Laurette, Mel Wardle Woodend, lyricist and film maker, Jon Watkiss, the lovely Lisa Johnston and best of’s own, Ian Henery, thanks to the online events that have been introduced during the current pandemic. This also paved the way, for the World Humanitarian Drive Covid-19 Poetry Competition, which was entered globally by many prolific figures, fighting for change. Ellis received a first-place prize for his poem; Fiscal Fall. The ceremony was hosted by The 5th President of Trinidad and Tobago.

Most recently, Ellis has released his first collection of Poetry; Life after Waking, which is available on Amazon now! The book is a chronology of poems beginning on that fateful day in July 2019. An emotional roller coaster of Ellis’s thoughts and feelings while battling internal demons.

Many of Ellis’s more recent poems express his feeling towards the wrongs of our current society and the way we live and think. His goal as a social activist, is to promote balance and tell the world, we can make a change, no matter how hopeless we feel, there is always light. He is proof, it can be done. In his own words, “I am no different from anyone else, everyone can make life more comfortable and live a more balanced way, whether you live in a palace or a carboard box”