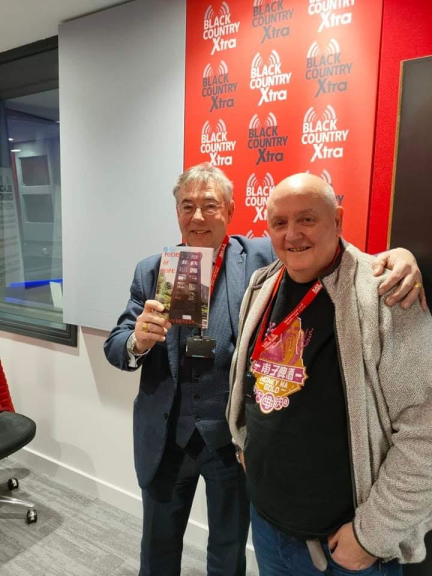 The Kates Hill Press will have a book stall at Wolverhampton Literature Festival on Friday 4th February.  The Festival will be profiling several local publishers in the cafe at the  Wolverhampton Art Gallery.

"Our slot is 10.45 to 11.45 but a range of our titles will be available throughout the day" explained Greg Stokes.   "Ian Henery and I will both be doing spoken word performances".

Hosted by Wolverhampton City Council the Festival aims to amplify the voices of authors, poets, writers, storytellers, puppeteers, podcasters and publishers across the UK.  Over a 3 day period their programme of events features a variety of entertainment consisting of talks, performances, readings and practical workshops. A high quality experience for visitors is provided by delivering engaging events in venues across the city through the power of literature.

Greg and Ian were both at Wolverhampton Literature Festival last year launching their books, The Gulf and Poems of Hope.  Due to COVID measures their performance in Wolverhampton Art Gallery was filmed by a company, Stream Theatre, who specialise in recording theatre performances and streamed online during the Festival.

The performance in Wolverhampton Art Gallery by Kates Hill Press was then streamed online across the UK by the charity Teenage Cancer Trust.  One of the poems in Ian`s book was dedicated to Stephen Sutton and used in poetry workshops with local Scouts to raise money for the charity.

Ian wrote a series of poems for the Mayor of Walsall, Councillor Rose Burley, to mark Stage Two of the Round Britain Womens Cycle Race when it took place in Walsall last year as part of Poetry in Motion.

Ian and Greg are scheduled to appear later in the year with Kates Hill Press at the first-ever Staffordshire Literature Festival in May and then with the Walsall Festival of Words in June.

Splash Pad Opening Times in Walsall Arboretum, Willenhall Memorial Park & Blowich King George V Playing Fields Walsall Summer 2022
Sign up for offers
Sign up for what's on guide
Become an author
Popular Categories
By clicking 'ACCEPT', you agree to the storing of cookies on your device to enhance site navigation, analyse site usage, and assist in our marketing efforts.
For more information on how we use cookies, please see our Cookie Policy.