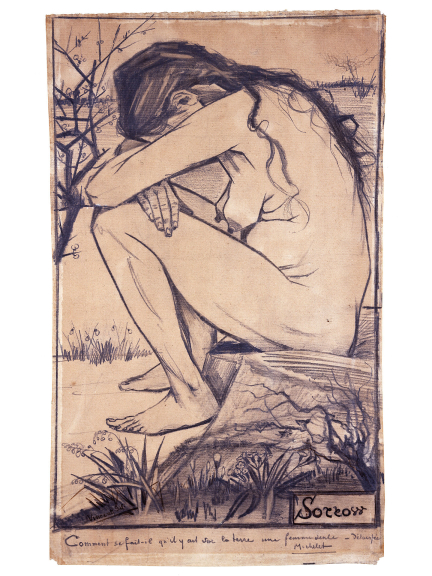 Vincent Van Gogh was a Dutch painter who became one of the most famous and influential figures in the history of Western art.  "Most of the 2,100 artworks including 860 oil paintings) were completed in the last two years of his life", explained Ian Henery. "He committed suicide aged only 37 years of age following years of mental illness and poverty.  In his life he was not commercially successful."  Van Gogh was born in 1853 and he died in 1890.

Sorrow is a drawing by Vincent Van Gogh which is exhibited in Walsall`s New Art Gallery.  The artwork depicts 32 year old Clasina Hoornik who was pregnant at the time Van Gogh drew her in pencil, pen and ink on paper.  Sorrow has become regarded as a masterpiece and is held as part of the Garman Ryan Collection and formerly part of the private collection of Sally Ryan who had the work hung in her permanent suite at the Dorchester Hotel in London.  In a letter to a friend Van Gogh described it as "the best figure I`ve drawn....I want to make drawings that touch some people.  Sorrow is a small beginning....there is at least something directly from my own heart".

Van Gogh met Clasina wandering the streets of The Hague working as a prostitute with her 5 year old daughter.  "Clasina was destitute, pregnant and addicted to alcohol.", explained Ian.   " Van Gogh provided a home for Clasina and her daughter and they planned to get married.  He called her by the pet name Siena.  Clasina modelled for Van Gogh, who took care of her son following the birth and they moved into a much larger apartment with a studio."  However, Clasina`s addiction to alcohol became too great and Van Gogh broke off their relationship.  Clasina later drowned herself in the Schelde River in Holland.

The poems and the artwork can be viewed as www.vangoghgallery.com/misc/ian-henery-poetry.  The website is housed in New York in the USA.

"Some years", said Ian, I got an email out of the blue from a student in California.  She wanted to turn one of the poems into music and wanted my permission."  Ian describes it as something of a "delightful surprise" and gave his consent and promptly "forgot about it".

On Monday 4th February 2019 Ian received an email from California which read "Dear Mr Henery, I don`t know if you remember me from writing to you a long time ago in regards to setting your poem "I Miss You" to music for an accompanied choir.  I am very happy to share with you the performance of a vocal ensemble I put together for my senior composition recital this past December".

"I was in shock", said Ian "and it was all a bit emotional.

"I very much look forward to hearing your thoughts on the piece.  I hope I captured it`s spirit.  Thank you again so very much for allowing me to use your work!"

And here is the poem:

As the grass awaits the wind

Or the morning sky awaits the sun.

Although I look for you In every doorway,

I find only darkness

As the flowers await the rain

Or the evening sky the stars.

Although I look for you In every café,

I find only emptiness

And loneliness lingers on:

How can a Virtual Assistant save you time and money?

THE RESCUE CULTURE?
Sign up for offers
Sign up for what's on guide
Become an author
Popular Categories