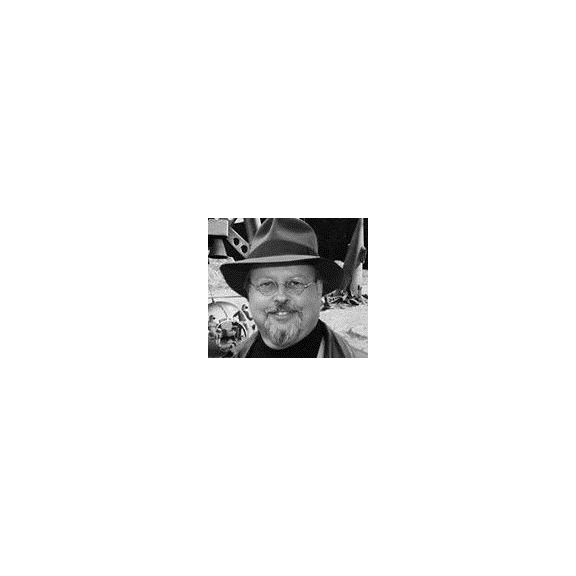 It was the summer of 1995 and I was exploring a living history re-enactment festival with my wife and baby daughter in Yorkshire.  We stumbled across the Dark Age encampment where Viking warriors practiced their battle-skill in the shieldwall before pitting their warcraft against each other in the great arena.   One such warrior caught my attention.  He stood, seax in one hand, yellow painted shield in the other and a conical helmet with a nose-guard on his head.  "Odin!", he bellowed, "I offer you a sacrifice!  Receive me in Valhalla this day!"

Stirring stuff - a Viking calling upon his deity to take his soul into the Viking after-life following the ensuing battle.  What made it intriguing is that this Dark Age warrior had a Bloxwich accent.  In character he told me that he was called Thorstein and that he was a skald (or poet and story-teller), rune reader and trader with the Birmingham Vikings who were part of the Norse Film and Pageant Society.  He was a keen historian, writer and photographer and believed in total immersion into his character to better understand weapons, battle-skill and Dark Age legends.

He also told me, in a broad Bloxwich accent, that he hailed from the Black Country and lived and worked in the Midlands, or Middle Earth, a region which inspired Tolkien`s dark lands of Mordor in The Lord of the Rings.  No kidding.  He also told me that he was "living on the edge of Mordor" and that he was "famous in a parallel universe".

His real name was Stuart Williams and we hit it off immediately.  The drama students from Kidderminster College were taking one of my Dark Age plays (Fenris the Wolf) on a national tour (it won an award at The Belfry Theatre in Telford) and it was also to feature in a showcase of theatre at Stratford-upon-Avon with the Bird of Prey Theatre.  I had principally come to the living history festival to garner support from the Norse Film and Pageant Society and Stuart, as a leading member, was very supportive and for that I was always grateful.   It was a shock to all of us in Walsall`s writing community when he died on Tuesday 15th October following a long battle with cancer.  Stuart (aka Thorstein) was the gift to us that kept on giving.  After  Stuart`s stint with the Birmingham Vikings I did not see him until 2011 when he was one of the organisers behind the open mic nights at Bookmark Bloxwich Library Theatre.  He did not care to be reminded of those far-off days or to be referred to by his Viking alter ego: he was now a serious writer.

Stuart was also hugely supportive of everyone in the community and I was especially grateful to him for contributing to an anthology of poetry in aid of the National Autistics Association plus an exhibition of artwork and poetry at Bloxwich Library Theatre when I was Walsall Poet Laureate in aid of the Mayor of Walsall`s Appeal.   That was Stuart - a friend to everybody and everybody`s friend.  He was a writer`s writer, Walsall`s answer to Terry Pratchett (complete with the same headgear) and he had been writing since the 1980`s, although mostly non-fiction as a freelance journalist in computing, photography, astronomy and local history.  His day job was working for Walsall Local History Centre in Essex Street and he was a published author on matters of local interest for Walsall Local History Centre.  His last years writing were in the genre of retro computing, retro gaming and computing history.  He was also a serious writer in science fiction, fantasy and steampunk especially in the pulp style.

From the beginning of 2001 he wrote a monthly local history column for the Walsall Chronicle, published from Wolverhampton by the Express and Star,  originally entitled to Local Heritage but later recast as Memory Lane.  Over 100 articles were published up to 2014 and more than any other local author in Walsall.  Stuart`s journalistic writing continued via his The Borough Blog and The Bloxwich Telegraph.  Stuart`s community journalism spanned providing feature photos for the Walsall Observer, Walsall Advertiser and Walsall Chronicle newspapers, the Blackcountryman magazine and, since 2006 (with a view to paying something back to his local community) The Bloxidge Tallygraph where he was editor, publisher and main writer.  This online community news and local heritage magazine for Bloxwich later became The Bloxwich Telegraph.

In September 2018 Stuart celebrated 40 years as a professional photographer starting when he studied at the world-renowned Wednesbury School of Photography.  He regularly supported Southcarts Books in Walsall with public readings from his books and science fiction conventions at the store, before they sadly closed down and championed the Walsall Writers Circle where he was a member and gave aspiring local writers his sagely advice on the world of publishing with a smile and a joke.  Stuart was both remarkably talented and socially engaged.  He was a local legend with a charming, self-effacing and relaxed attitude to life.  He will be missed by the immense number of friends he made both online and in the real world.