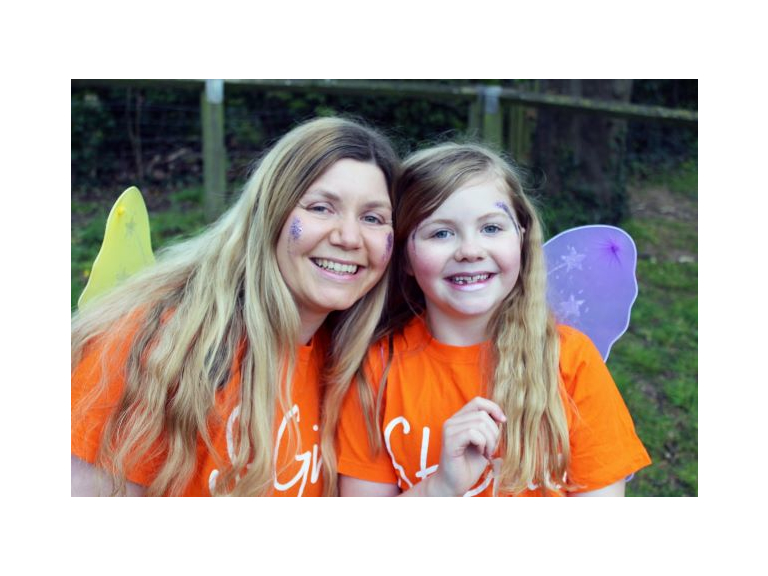 A Staffordshire mum and daughter will be enjoying front row seats at the Platinum Jubilee Pageant in London this Sunday (June 5) to thank them for their tireless fundraising for St Giles Hospice.

Amy Foster and her daughter Ellanor, aged nine, will be seated in the stand directly outside Buckingham Palace to watch the spectacular procession, featuring national treasures and iconic figures from music, film, sport and the arts, including Sir Cliff Richard, Jools Holland and Ed Sheeran.

The pair were awarded the tickets by Smooth Radio after they were nominated for an unsung heroes award. Over the last three years Amy, who works as a healthcare assistant at St Giles, and Ellanor have raised more than £2,000 to support the work of the hospice, which cares for patients and their families who are living with a terminal illness.

Amy said: “It’s absolutely amazing, I still can’t quite believe it – we’ve been given exclusive tickets to see the whole event and I can’t get over what an honour it is.”

She added that she had raised funds for St Giles for several years but in 2018 her support for the hospice became more personal when her mother-in-law Sandra, known as San, was diagnosed with cancer. San came to St Giles as an inpatient in January 2019 for a couple of weeks, before being discharged and dying at her nursing home, as was her wish, a couple of months later.

“I was already a St Giles supporter but I decided that I really wanted to work here because of the support and help that the hospice gave to my mother-in-law,” Amy said. “The staff were absolute angels and I wanted to give back some of the love and support that I had received from St Giles to other people.

“When my mother-in-law came into the hospice she was given 24 hours to live, but St Giles worked their magic and she lived for a further two months. They sorted out her medication and gave her such care and support – it was amazing to see.

“After she passed away we were given bereavement support and the staff were just so good to us, always listening, and supported us so well.”

Amy, who lives in Tamworth, added that she and Ellanor were counting down the hours until their big trip to London this weekend.

“Ellanor loves the Queen and has always wanted to go to Buckingham Palace so she’s absolutely thrilled and can’t wait to go,” she said. “It’s a historic occasion that she’ll never forget.”

The Royal Jubilee treat comes just weeks after Ellanor won the Child of the Year Award for her fundraising at the Spirit of Tamworth Awards organised by Tamworth Round Table.

For the past three years Ellanor, who attends Coton Green Primary School, has helped Amy with her fundraising, baking cakes for raffles and stalls and joining her on sponsored events including Solstice Walk Your Way and the Hero Walk – often dressed as Abba, the Incredibles, or Harry Potter characters.

“She loves to dress up and make people smile,” Amy said. “And she loves baking so she loves to help make cakes that we can sell on our stalls. Next month we’ll be doing St Giles Hospice’s Enchanted Solstice Walk together – there’s just no stopping her!”

Elinor Eustace, Income Generation Director at St Giles Hospice, said: “We’re all so thrilled that Ellanor and Amy have won tickets to the Jubilee Pageant – their unsung heroes award is so well deserved for all the tireless fundraising they do.

“St Giles is incredibly grateful to all of our fundraisers and volunteers, who make such a huge difference to our work. The hospice needs to raise £850,000 every month to keep our services going and we just couldn’t do it without the amazing dedication of people like Ellanor and Amy.”

For more information about St Giles Hospice and the expert care it provides, please visit www.stgileshospice.com

Plans for new Aldridge Station unlocked following Government backing
Sign up for offers
Sign up for what's on guide
Become an author
Popular Categories
By clicking 'ACCEPT', you agree to the storing of cookies on your device to enhance site navigation, analyse site usage, and assist in our marketing efforts.
For more information on how we use cookies, please see our Cookie Policy.