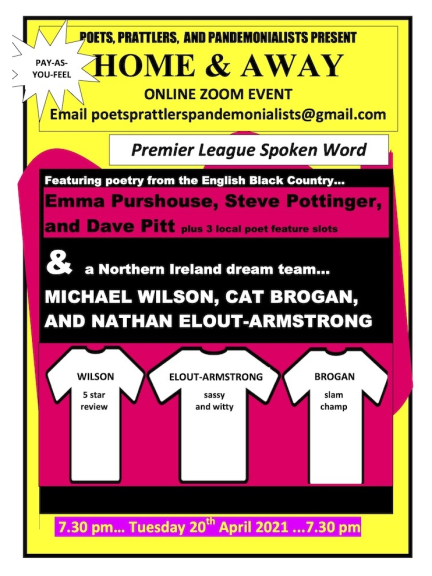 In 2018, poetry collective Poets, Prattlers, and Pandemonialists hit upon the idea of a poetry event they called Home & Away. It was a game of two halves, each of 45 minutes (yes, they were influenced by Wolves’ ascension into the Premier League) and featured two teams of poets. In the first half there were sets from three established Midlands poets, along with three cameo appearances from local rising stars. The second half featured the ‘away’ team: three poets from another town or city, each doing fifteen-minute sets.

It’s taken them a while, but they're resurrecting Home & Away, and putting on an event on Tuesday 20th April. It'll be on Zoom, and they're taking advantage of that to bring in a team of very talented poets all the way from Northern Ireland: Cat Brogan, Nathan Elout-Armstrong, and Michael Wilson, who’ve an array of awards and glowing CVs to their names.

Because it’s been ages since they’ve done a gig, the three members of PPP will represent the Midlands, while the three rising stars – each of whom will bring their considerable talents to the night – are Priyanka Joshi, Sandra Robinson, and Gracey Bee. It will be a pay-as-you-feel event, and they assure us – absolutely and categorically – that they will not be utilising VAR on the night. Or any other night, come to that.

To join their audience, just send them an email. They’ll send out the Zoom link on the morning of the event.