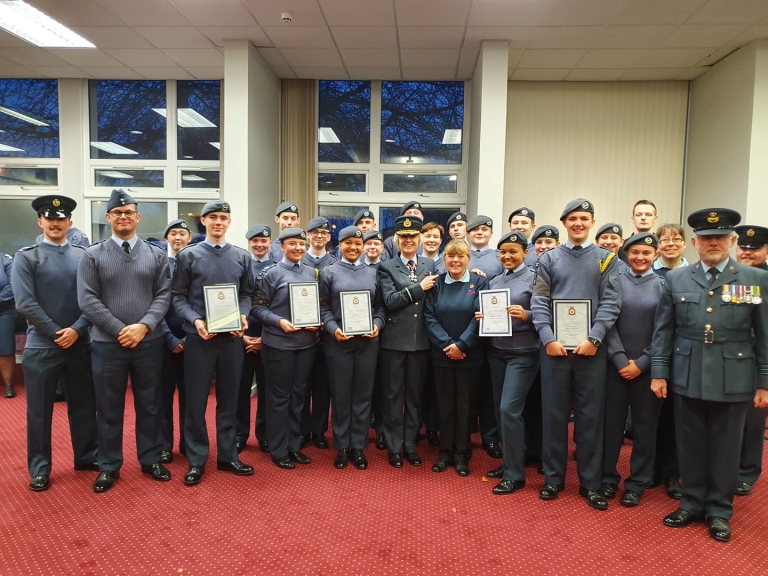 On the 17th November 2019, CWO Keely Mansell, SGT Ben Smith, CDT Sam Kitchen, CPL Nathan Blakemore and SGT Kyra Holden from 425 Aldridge Squadron performed alongside 14 other cadets from across Staffordshire wing as part of ‘Staffordshire Wing Marching and Concert Band’ in a national competition. With the help of CI Sue Horobin, who is staffs wing bandmaster, and Flight Sergeant Luke Horobin, Wales and West RAFAC bandmaster, the band was able to deliver a stellar performance across all 6 categories they entered. Results came to show that they placed first in full marching band, solo bugle, ensemble, and fanfare and band turnout. The band also were a close second in their percussion section with only two points difference between first and second.

‘It was an amazing feeling when each win was announced. It went to show that all our hard work payed off and that practice really does make perfect. It was nerve-wracking at first as it was my first year as Drum Major but I’m glad I was able to march the band to victory.’ Says CWO Keely Mansell, who won 2nd place out of 5 regions within her first year of taking the role of drum major. ‘we usually get together to practice between one or two weekends a month wherever possible to make sure that we polish up as much as possible on our marching, musicality and overall standard ahead of each major competition. We get help from the CI’s and Flight sergeant and although it gets difficult at times, we all really bond as a team and help each other to become better people all round, which arguably may set us aside from the other bands.’

With this said, it’s safe to say that Staffordshire Wing Band is something that the cadets take pride in. SGT Ben Smith, part of the brass section of the band has said that ‘Staffordshire Wing Band has become a huge part of my cadet career and thanks to CI Horobin, FS Horobin and the other staff I have been able to improve my standard of playing as well as my drill which has made me become a more confident person.’ SGT Holden, lead drummer for the Band has said that ‘Band is an amazing opportunity that I haven’t regretted since I started. Although there’s been ups and downs within my 4 years of being in the band, it is a huge part of why I take such pride in cadets. This year was my second year in the band as lead drummer and my first year trying something new- singing alongside CDT Bromley in the ensemble. The most important part of the whole experience each year for me is seeing CI Horobin’s and Flight Sergeant Horobin’s faces light up with joy when they announce where we place and how well we do each year. I like that band teaches you more than how to play an instrument, it teaches you to work as part of a team and to have confidence in yourself.

Since the weekend, CI Horobin and Flight Sergeant Horobin have shown endless gratitude towards the cadets for their achievements, saying that they ‘couldn’t be more proud’ of the Band’s ‘outstanding commitment’. The band has huge plans for the next year and intend on making next year even better that this one.

New Anthology, Poetry Through Fresh Eyes By Willenhall Poet Ellis Unchained
Sign up for offers
Sign up for what's on guide
Become an author
Popular Categories