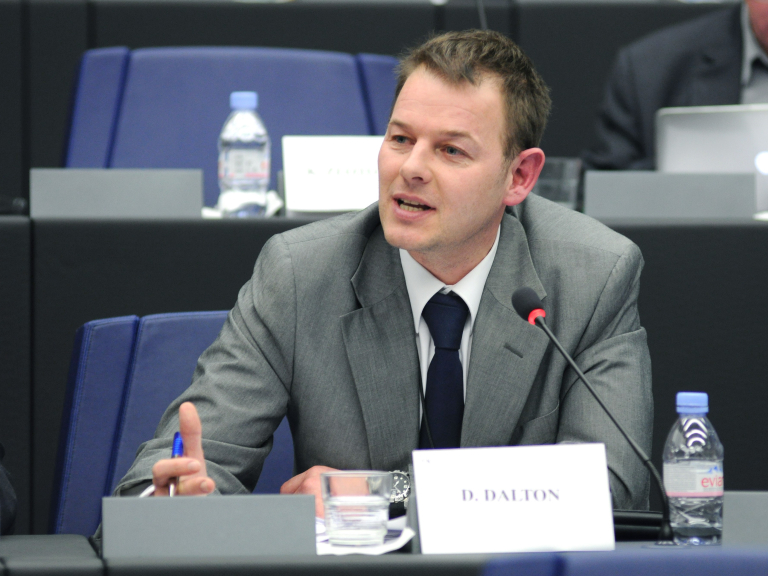 In a week when cabinet ministers Greg Clark, Amber Rudd and David Gauke issued threats to delay Brexit of Tory hardliners voted down the Prime Minister’s plan for a new EU deal a Member of the European Parliament flew from Brussels to address the Aldridge- Brownhills Conservative and Unionist Association to tell them what is really going on in the European Parliament.

"I stand for the repatriation of the United Kingdom from the European Union" said Dan Dalton, MEP for the West Midlands to a packed Sutton Coldfield Golf Club on 22nd February during their Annual Dinner "and in a month I’ll be redundant!"  This was greeted with unanimous applause by Wendy Morton MP, Aldridge councillors and members of the Conservative and Unionist Association of Aldridge and Brownhills.  Dan Dalton, a former cricketer who has been a Member of the European Parliament since January 2015, confessed to having wanted to remain a member of the European Union during the Referendum of 2016.

"I didn’t see how the UK could survive without the European Union" said the former cricketer "but now I do and the people have spoken.  I represent the manufacturing heartland of the United Kingdom, the West Midlands and I see a future for this country beyond Europe.  The UK will leave the EU before midnight on 29th March 2019, UK time, when the two year period for Brexit negotiations has expired and I will be out of a job!"

This was once again met by applause by the Aldridge-Brown hills Conservative Unionist Association.  "I first met Dan Dalton,” explained Wendy Morton MP "many years ago playing cricket in South Africa.  He has been a good friend and he will always be welcome in Aldridge and Brownhills, whether he is a Member of the European Parliament or not after Brexit".

Dan Dalton MEP described a difficult process of disentanglement of membership from the European Union after 46 years.  He admitted that it was never going to be easy in a week that saw MPs from both Labour and the Conservatives create a new independent group of MPs in Parliament.  Dan said that he believed a contributing factor was the desire for a second referendum in opposition to Brexit.  "Political affinities in the country as a whole is shifting" explained Dan "from the traditional parties to one more closely representing remain or leave positions to the referendum."  However, Dan did not believe the defections changed the Brexit arithmetic on Parliament but "the sands are sifting but unlikely to move quickly enough to change the situation with Brexit.  The UK is now only weeks away from leaving the EU with still no deal agreed and no natural Parliamentary majority for any alternative".

Dan described a flurry of activity between the Attorney General, Geoffrey Cox and the Brexit Secretary, Stephen Barclay, who were in and out of Brussels for negotiations and the Prime Minister holding talks with Jean-Claude Juncker, the European Commission President.  Dan also said the Prime Minister was attending the EU Summit in Sharm El-Sheikh in Egypt at the weekend where those negotiations were likely to be finalised.    However, the mood, according to Dan, was one of paralysis.  "The deal will not have the necessary support", he said, "no deal will be ruled out but there is not yet a majority in Parliament for extending Article 50 to avoid no deal.  This cannot continue", said Dan "and every week between now and the end of March will get more fraught as the options narrow".

Dan Dalton MEP was keen to emphasise and re-emphasise again that time was running out and that the UK still had no deal that protected the Uk economic and security interests.  He believed that it was a mistake.  The UK were left with two options: to crash out of the EU with no deal or try and leave at a later date with a deal.  He did not think there would be time to agree a deal and complete all the necessary legislation before 29th March and therefore the best approach would be to extend Article 50 and delay the UK`s date of departure.  "But I hope we can have a deal", he said "and that in a month I`ll be redundant!"

Wendy Morton MP thanked Dan Dalton MEP for addressing the Aldridge-Brownhills Conservative and Unionist Association before he caught his 4am flight the next day back to Brussels.  "I much prefer hearing what Dan has to say" she said "than what comes out of the mouths of Jean-Claude Juncker, Martin Schulz and Donald Tusk".