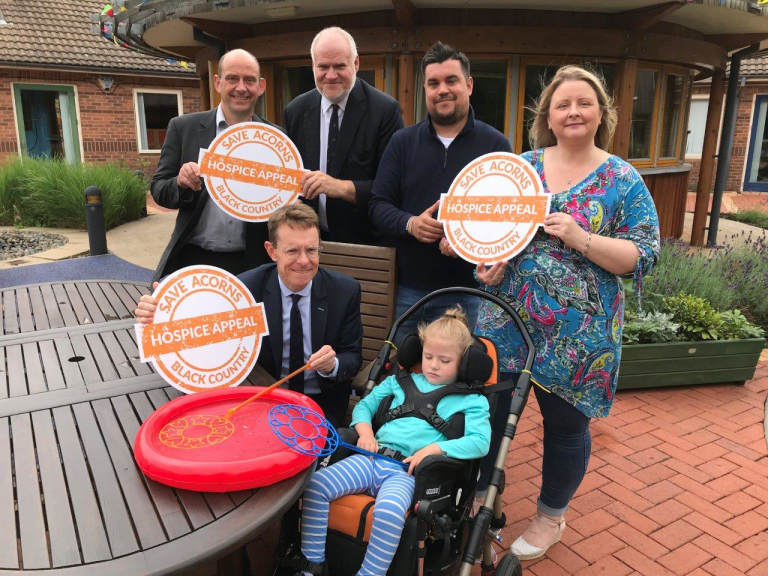 Acorns Children’s Hospice has announced today (Thursday 22 April) that the urgent
appeal to save its Black Country children’s hospice has been successful, and that the
long-term future of the hospice is now secure.

The Save Acorns Black Country Hospice Appeal was launched in July 2019 after the
proposal to close the Walsall-based hospice - due to financial challenges - was put
on hold.

A huge groundswell of support from local people, fundraising groups and businesses
saw donations pour-in towards the charity and its hospice which provides care to
around 200 children and their families every year.

Despite the uncertainty of the past year and the massive challenges created by the
pandemic, donations have continued to come in. Together with other funding
received by Acorns during the pandemic, this means that the long-term future of
Acorns in the Black Country and its specialist care for life limited and life threatened
children and their families is now secure.

Toby Porter, Acorns Chief Executive thanked the local community for their key role in
ensuring the Appeal’s success. He said: “We are truly overjoyed to be able to share
this wonderful news, which we know will be celebrated across the Black Country.
“In our darkest hour in 2019, the local community responded immediately and
showed their determination to safeguard the long-term future of their local children’s
hospice in Walsall. We simply wouldn’t be here today without the generosity that so
many individuals, families, and businesses have shown. Thank you!

“What I think those who have supported the Appeal can be proudest of is that, thanks
to their generosity from day one of the Appeal, Acorns nurses, care teams and
volunteers have been able to continue to support children and families at the Walsall
hospice and in the community every single day of the coronavirus pandemic. Our
doors have never closed, and we have had children staying with us every single day.
“The local community has shown such generosity and determination. Thanks to you,
the only children’s hospice in the Black Country has kept its doors open. It’s thanks
to you that we can now look to the future with certainty.”

Since the launch of the Appeal, the community has rallied, with funds being raised at
collections in pubs, at sports grounds and at outdoor events – through workplace
collections, sponsored walks and lemonade stands.
Local business leaders and dignitaries joined a special ‘firewalk’ event in aid of the
Appeal at the Black Country Living Museum.

Celebrities have also expressed their solidarity with Acorns, with messages of
support from Dame Julie Walters, Beverley Knight, and Alison Hammond as well as
Walsall-born Ellie Simmonds and Noddy Holder.
Acorns supporter, the writer and director, Steven Knight CBE, creator of Peaky
Blinders, said: “This is such fantastic news, especially in these difficult times. A truly
good news story which will mean so much to so many people. Well done to everyone
at Acorns.”

Toby added: “The goal of the Appeal was to raise the funds needed to secure the
long-term future of our specialist care service at Acorns in the Black Country. We can
now be confident about the future and once again plan our future services at the
hospice with confidence in the long-term future.

“Like all charities, we rely on the ongoing generosity of the local community, so
please keep supporting Acorns, so we can be there for every child and their family
who needs us, now and in the future.”
To find out more about Acorns and how you can support, visit www.acorns.org.uk
Some highlights from the Save Acorns Black Country Hospice Appeal
[Photos available here]

19 July – the Save Acorns Black Country Hospice Appeal is launched

12 December - David Wall from Coseley, walks an impressive 4 million steps to raise
money for the hospice