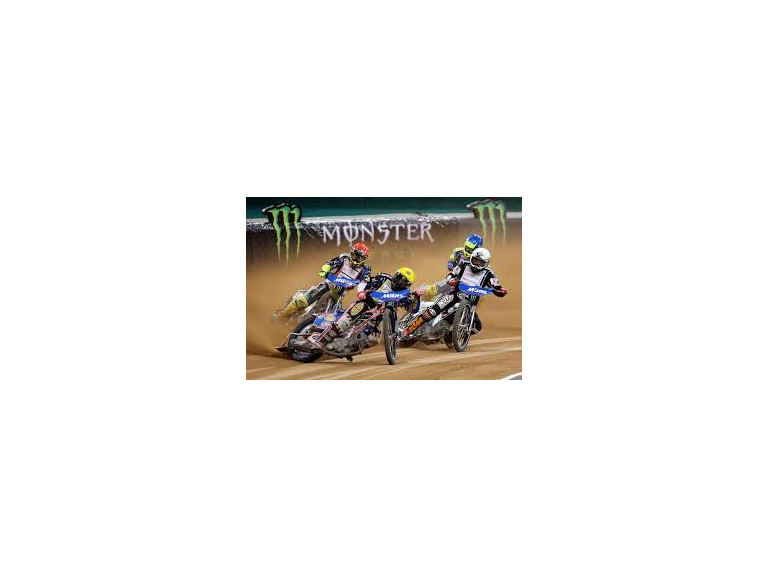 Let me take you back too a few months before Christmas. I think everybody has that one person in the family who is hard to buy for.

In my family it's dad. He doesn't drink, smoke, play sport anymore but one thing we both love is sport.

So my present to him this Christmas just gone was a ticket to the British FIM Speedway Grand Prix in the Millennium Stadium, Cardiff.

Well two tickets to tell the true, i couldn't let him go on his own, how could I?

If you never heard of or seen speedway you are missing a treat. Four riders keep turning left over four laps and a race is over in less than a minute. It's not as easy as that!

The riders race 500cc single-geared machines with no brakes, they can accelerate rapidly and can reach speeds in excess of 140kph. The bikes are run on pure methanol and must have a safety cut out device fitted. The rider simple pulls the non-elastic string which is attached to the riders right wrist.

The Grand Prix Series is for the top 15 riders in the world plus one wild card rider pure round.

When the riders are not riding in the Grand Prix they ride in different leagues across the world in the Uk there are three different leagues - National Division (lowest), Premier League (middle tier) and Elite league (highest).

Cardiff becomes the centre of the speedway world on the day of the British FIM Speedway Grand Prix.

Not only is the event held in the Millennium Stadium but the fanzone takes over Wood Street from 11am with lots of enterainment and stands.

BMX 2013 World Champion Adam Kun and British Champion Lee Musselwhite preformed with the Team Extreme at different times in the day to keep the crowds entertain. There was live music from the Magoos plus Capital FM South Wales music station broadcast from 12-4pm. With vintage bikes display and many chances to buy merchandise and programmes there as well.

The gates open at 4pm, one hour before engines roar and got under way at 5pm. With Tai Woffinden standing on the top of the overall standing and been British the fans backing even before the racing has started was electric.

Tai has never won the British FIM Speedway GP even though he won the World Championship in 2013. With great racing thoughout the night, all riders has crowd backing from Poland, Australia, Denmark and many more.

The British interest went all the way to the final with Tai joining Chris Holder, Niels-Kristian Iversen and Peter Kildemand. On the night it was Niels who come out on top with Holder 2nd, Kildemand 3rd and Woffinden 4th.

Niels-Kristian Iversen first come over to Britian to ride for King's Lynn Stars for the last three meetings of the 2001 season. Iversen was bought back to British shores in 2003 by Tim Stone to ride in Newport Wasps in the premier league.

Newport Wasps rode at the Hayley Stadium, Queenway Meadows intil the early part of the 2008 season when the promoter Tim Stone died. The club folded for good in 2012. The fans of Newport Speedway have been trying to get speedway back into the town ever since.

So finally it's a big Congrats to Niels-Kristian Iversen and good luck to all the Newport speedway fans in their quest to bring back the sport.