Sorry this event has now expired. But please check out other great events from the best of Sudbury.
i
Based on the latest Government guidelines, some events may be postponed, cancelled or taking place online. Please check with the organiser for the latest info. 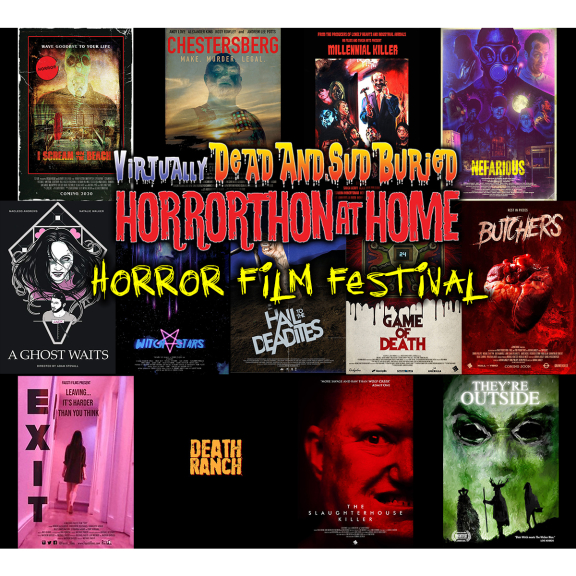 After 4 years of Horrorthon, this year's Dead And SudBuried would have made the big jump to a fully fledged horror film festival combining classics with brand new features and shorts spread over a whole weekend in little ol' Sudbury, Suffolk. Sadly after much consideration of Government guidelines, our lovely home of The Quay Theatre, Sudbury, Suffolk will be remaining closed for the remainder of 2020. Reluctantly Dead And SudBuried Reborn: Horrorthon V has been postponed until 23rd-24th October 2021.

To build a horror bridge to next year’s event, here's Virtually Dead And SudBuried: Horrorthon At Home to curb some of that disappointment! It won't be the same as the real event we had planned but it'll keep you all going through these very strange times. Get ready for at least 10 brand new, unreleased in the UK horror features and over 40 horror shorts to keep you entertained from Friday 13th November through to 15th November.

Get ready for 10 brand new horror features, so far unreleased in the UK including cannibal klu klux klan in Dark Temple Pictures’ DEATH RANCH, gory black comedy in a land where murder is legal CHESTERSBERG, low budget alien invaders in Italian gorefest WITCHSTARS, The Wicker Man meets Blair Witch in THEY’RE OUTSIDE, Wrong Turn-style farmyard fun in BUTCHERS, The Evil Dead fan base documentary HAIL TO THE DEADITES, a brutal Australian take on Henry in the shape of the UK Premiere THE SLAUGHERHOUSE KILLER, obnoxious teens play Jumanji with exploding heads in GAME OF DEATH, Total Film’s Best Movie of FrightFest 2020 award winner the brilliant supernatural romance A GHOST WAITS and more to be announced.

In addition, we’ve put together a special package of the best of UK indie horror that can be viewed at any time from midnight on Friday 13th and throughout the weekend. This virtual second screen will fill in any spare space throughout the three days or maybe replace something that doesn’t take your fancy. Support UK Indie horror with these low budget gems and enjoy NEFARIOUS, EXIT, THE MILLENNIAL KILLER and I SCREAM ON THE BEACH.

And if that’s not enough, there’s another 43 horror shorts screening throughout the weekend from all around the world and pretty much covering every horror sub-genre from zombies to vampires to witchcraft and beyond.

We've tried to keep costs as low as possible just to cover streaming costs and provide the necessary security to prevent piracy and geoblock movies to the UK. Tickets are now on sale with full weekend passes available for just £29 and individual tickets for each movie from £5. All content is for adults only and not suitable for anyone under 18 years of age.

Thanks for your support, enjoy the show and hopefully we'll see you all next year.