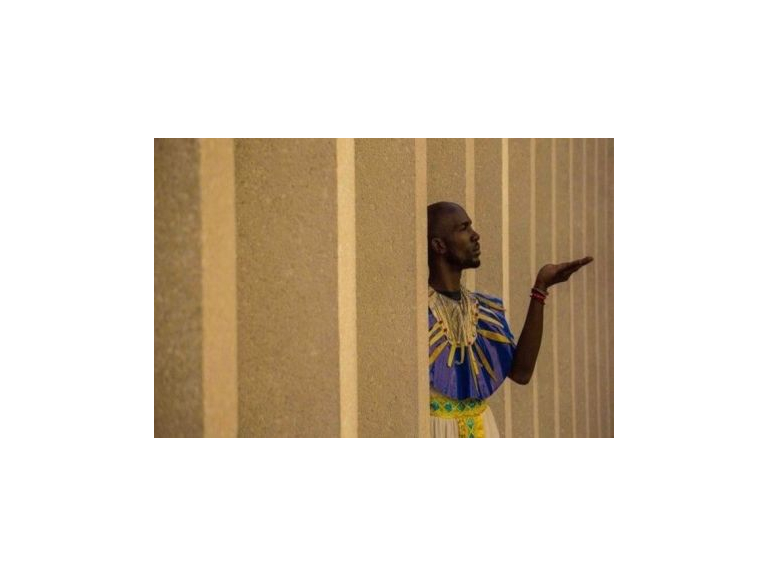 'BREAKING THE MOULD: New Signatures from the Democratic Republic of Congo' features the work of 12 emerging artists from DRC, predominantly former students of the Academy of Fine Arts in Kinshasa.

'BREAKING THE MOULD: New Signatures from the Democratic Republic of Congo' features the work of 12 emerging artists from DRC, predominantly former students of the Academy of Fine Arts in Kinshasa, who are breaking the boundaries of academic training and developing new forms of visual explorations.

For this exhibition, curator Christine Eyene has selected over fifteen art works and series comprising painting, photography, mixed-media and installation pieces that reflect the new ideas, aesthetics and discourses emerging from the heart of Africa.

Arlette Bashizi’s photography series entitled Re-construction (2020), uses self-portrait to reclaim and reconstruct the image of Black, African, and more particularly Congolese women against persisting stereotypes and misrepresentations. Anastasie Langu explores a similar theme through her series Norm (2021), while Nefercongo (2019) by multidisciplinary artist Chris Shongo elevates Congolese women to the status of Egyptian queen Nefertiti to whom he attributes the origin of an African women’s lineage.

In Foreigner (2019-onging) Godelive Kasangati takes on a more personal introspective approach to dwell on the ruptures in her family history. Trauma, memory, identity, and place are both invested and re-enacted through performative gestures using the photographer’s body. Family history is also the starting point of Perpetual Disconnect (2019-20) by Arsene Mpiana who revisits photographic archives, histories, and myth in an attempt to reconnect with his origins.

Visual narratives are a particularity of painter Ange Swana who writes scenarios on bodies. She uses the human figure, often female, to tell intimate stories and life events that leave behind marks, tears, wounds, scabs, and scars. Joycenath Tshamala’s naturalistic approach to portraiture is counterbalanced by his use of rusted razor blades. These depict his figures’ head as a metaphor of unsound minds; minds that he is seeking to conscientize in the face of societal issues.

A sculptor and trained architect, Beau Disundi’s installations negotiate architectural and literary vocabularies to create forms that transgress those disciplines and blur the boundaries between sculpture and architecture. Ghislain Ditshekedi’s Ishango Trenscending Decoding 1.2 (2020) is a series of mixed-media compositions based on the Ishango Bone, a Congolese tool and mathematical object dating between 18,000 and 20,000 BC. Inspired by this seminal object, which is part of Africa’s heritage held in European museums (while the Lubumbashi Museum has to be content with a replica), Ditshekedi’s compositions experiment a visual language seeking to decode and transcend its mathematical, philosophical, and psychological dimensions.

The arduous burden of having nothing to do (2019) documents the informal economy to which young Congolese have to resort in order to fend for themselves in a society that is failing them. Jamil Lusala captures unique and unusual moments, in those ceaseless street activities, that are nonetheless part of everyday urban life. Catheris Mondombo addresses the same topic through the prism of astronomical exploration in an approach that echoes Afrofuturistic thinking.
Local and global environmental issues are taken up by Stone Mutshikene through mixed media works that incorporate chromatic experiments, collages, and repurposed material burnt by the artist.

'BREAKING THE MOULD: New Signatures from the Democratic Republic of Congo' is the artists’ first gallery exhibition in the UK. It also seeks to place the second largest African country, whose art history and sculptural traditions have had a significant impact on the development of Western and global modernism, at the centre of the continent’s creativity.

Alongside the exhibition is planned a public programme that will launch during 1-54 Contemporary African Art Fair and a catalogue published by Beam Editions with a foreword by Barby Asante, and essays by the curator and Lubumbashi-based art writer and cultural operator Patrick Mudekereza.

This exhibition marks the reopening of the newly redeveloped 198 Contemporary Arts and Learning and is funded by Yetu - Property Investment Club and Arts Council England.