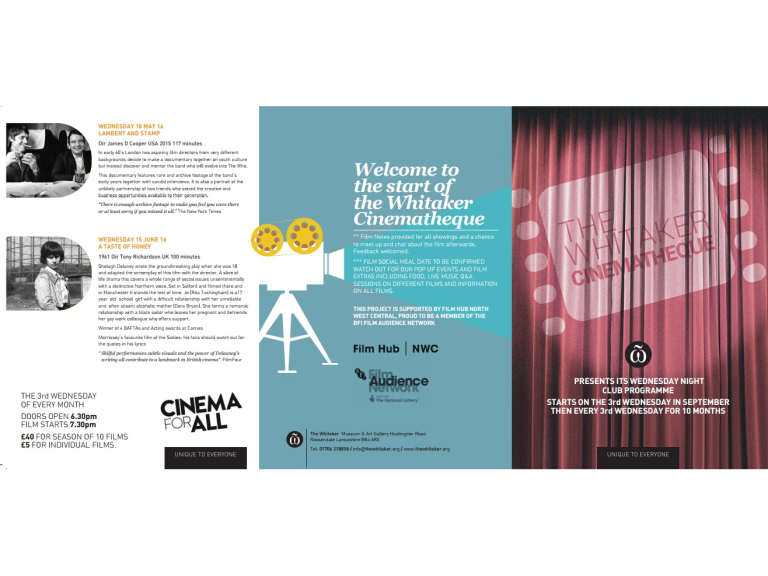 The Whitaker in Rossendale is launching its own independent cinema in 2016, showcasing award-winning, ground-breaking films from all decades.

The Whitaker Cinematheque is supported by Film Hub North West Central, and is a must for all movie enthusiasts. A specially selected film will be shown on the third Wednesday of every month from 7.30pm - starting in September - and it will cost as little as £5 per person.

Following the showing, there will be the opportunity to mingle will other film fans, provide feedback and chat. The Whitaker's Cinematheque will also be home to pop-up events, live question and answer sessions, and more.

The film schedule is as follows:

A filmmaker recalls his childhood in a war-town Sicilian village where he discovered movies and girls. The film focuses on what the cinema meant for the small town and the films it showed.

This is a 1960's film documenting the rise of The Who from the point of view of two aspiring film directors who accidentally end up mentoring the band.  This film features rare, archived footage from The Who's early days.

A Taste of Honey

This film depicts the fictional story of Sheelagh Delaney in 1960's Salford, her relationship with a black sailor, the problems with an alcoholic mother, whilst highlighting significant social issues of her generation. This is Morrissey's favourite film of the 60s and one he's regularly quoted it in his lyrics.

Offering a cinema experience like no other, The Whitaker's Cinematheque is a fantastic idea to come to Rossendale.