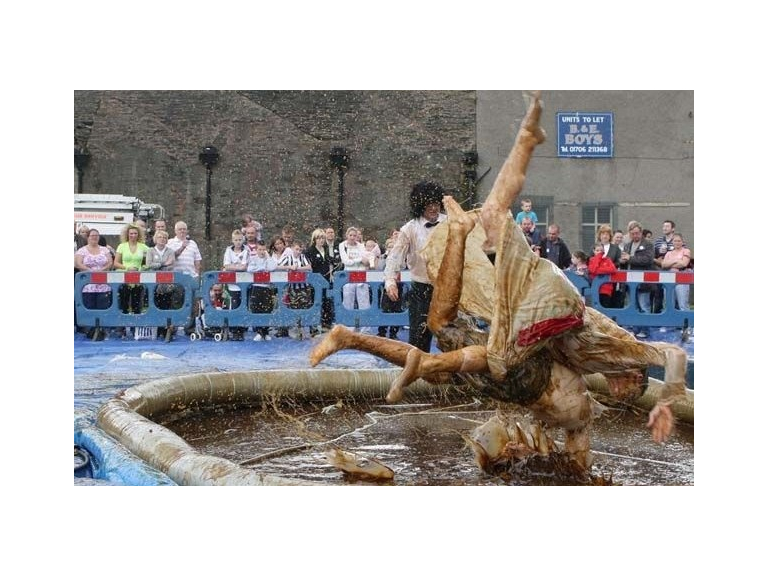 The Aussies are coming.

The World Gravy Wrestling Championships has now attracted the attention of the Australians. We have been informed that Australian TV channel called Active T.V from Melbourne are sending people over to report and compete on the Championships. Let’s hope we can give them a good Lancashire welcome, with lashings of gravy!!!!

Always placed in the top ten of the weirdest ‘sports’ and pastimes, the World Gravy Wrestling Championships will again be held at the Rose ‘n Bowl, Stacksteads, Rossendale, Lancashire. If you have not seen Gravy Wresting in action, take a look at the various videos and photos posted on the internet. Once your appetite has been whetted, why not have a go yourself, it’s all in a good cause as you have a chance to raise money for charity. Competitors are now being invited to take part and raise funds for their favourite charity, whilst businesses are encouraged to support the event by sponsoring individuals or bouts, giving businesses the opportunity to be recognised in promotional materials

Last year’s event brought out the crowds in force to laugh themselves silly as TV Celebrities Will Mellow and Rory McGrath failed in the their attempts to become World Championships.

2013 will be again be a fantastic family day out, featuring inflatables, fancy dress and big screen action.  Celebrity judges will be on hand to oversee the event while the referee tries to ensure fair play, a slippery task with the competitors splashing around in the warm gravy pool.

Last year’s Champions, April Howe and Danny Carr, have been invited to defend their crowns. This year’s winners will receive the glittering trophy and wallow in fame - if not fortune – as the World Gravy Wrestling Champions 2013.

Individuals are now being invited to apply to take part and entry is on a strictly first come first served basis. The dress code is ‘Fancy Dress’ and ‘Entertainment’ will gain more points than sports prowess.

Competitors are encouraged to raise money for their own favourite charity while the WGW Organisation raises funds for the East Lancs Hospice through entry to the event and sponsorship.  Entry forms and an information pack are available from the ‘The Rose ’n’ Bowl’ on 01706 879555 or Sara Lusty on 01706 2312029 or www.worldgravywrestling.com