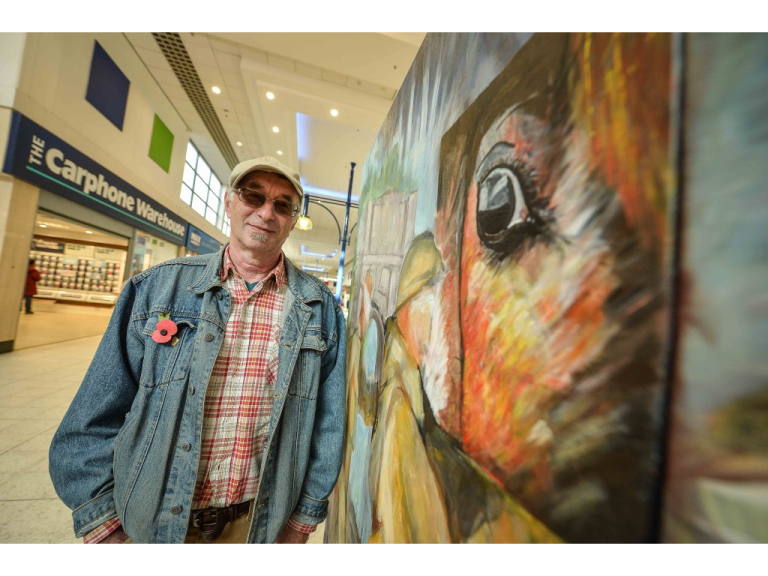 AN art tutor who was forced to stop painting when he was struck by two heart attacks has finally seen his First World War tribute unveiled in time for Remembrance Sunday - after it was finished by his students.

The 9ft by 5ft acrylic commemorative WWI triptych, which is being displayed in Stretford Mall until November 11, was painted by the Partington Wellbeing Painting Group under the guidance of professional artist Tony Turner.

The 64-year-old, who has run the art group for the past three years, directed most of the painting work until he suffered two heart attacks just a week apart from one another in January this year.

Seriously ill in Wythenshawe Hospital, he underwent a quadruple bypass a week later and was forced to spend most of the year recovering at home.

However, determined to see his idea through to the end and finish off what they had started, members of the group pulled together to finish the painting in time for Remembrance Sunday.

The overall theme of the painting was based on John Singer Sargent’s ‘Gassed’ painting showing wounded soldiers crossing the battlefield.

When the art group couldn’t find anywhere big enough to display their finished work, Stretford and Urmston MP Kate Green stepped in to ensure it received the audience it deserved with a two-week viewing at Stretford Mall.

It was a triumphant moment for former local government worker Tony, from Davyhulme, who has finally fulfilled his ambition to produce such a large-scale artwork involving all members of his art group.

“I promised these people they could paint a large painting and now they’ve done it. It’s in a very prominent place and lots of people are going to see it.

“It’s a grim painting but it’s intended to be that way. I’ve met a lot of people who’ve lived through the Second World War and I feel we need to pass on this history and the bravery of these people who fought, it should be remembered.”

Depicting powerful First World War imagery including bandaged soldiers, women factory workers, a war horse, iconic aircraft and poppies, the painting involved all 12 members of the art group from the youngest through to the oldest.

Gareth Wilkins, centre manager at Stretford Mall said: “This is a poignant painting and it is all credit to Tony’s skill and dedication that his group had the tenacity to finish it. It deserves to have an audience and we are proud to be able to showcase it here at Stretford Mall.”

Work first started on the painting around 18 months ago with the intention of commemorating the centenary of the First World War last November however when the project overran, the group decided to focus on the Remembrance Service this year instead.

The artists each worked on a small section of the painting during their Friday morning art classes before the whole triptych was put together. Funding for the canvasses was provided by Trafford Library Services.

Karl Newbold, who is the oldest member of the group at 84 and a former Army soldier with the Parachute Regiment, said: “Everybody has been very pleased with it, particularly our local MP Kate. It was great to have her support. It’s very important to display it now in the run up to Remembrance Sunday – it’s an opportune moment.

“There will be many veterans using the centre and it will be nice for them to see it. All of the scenes are from the First World War but irrespective of whether it was WW1 or WW2, people must still remember all those who fight on behalf of their country.”

Karl, of River Lane, Partington, completed National Service in Egypt between 1950 and 1953, and later became a distribution manager in the frozen food industry. He initially joined a watercolour class with his wife a few years ago and then decided to expand his skills by working with acrylics at the Partington Wellbeing Painting Group a year ago.

“I don’t have a great deal of experience but we really enjoy it. Some people are more experienced than others but everybody has contributed to this particular artwork,” he said.

The art class, which is funded by Partington-based health and wellbeing social enterprise BlueSCI, is one of two run by Tony to promote mental health and wellbeing and encourage people to take time to observe and enjoy their surroundings – a technique known today as ‘mindfulness’ but something the artist has been promoting all his life.

“Painting is therapeutic,” he said.

“It’s good to observe things more closely. I’m not trained as a teacher but I’ve been a painter all my life and I find it therapeutic.

“I’ve sold a lot of paintings but I find the work that I do now adds more value to my life.

“Fundamentally, it’s a wellbeing class. We play music and talk about things. People will come and speak to each other for the first hour.

“Many people have said that art has changed their life around and it has certainly added more value to my life. People really appreciate what you do for them.

“Everyone is an artist. I didn’t always know that. If you’d asked me that question 20 years ago I would have said some people have a gift for painting and some don’t but it’s not true. Everyone can and should paint.”

At 40 years old, Victoria Chairulina is the youngest member of the group and coordinated the WW1 project in Tony’s absence.

The architecture graduate, who worked as an art teacher in her native Lithuania prior to moving to the UK, said the artwork was completed in three separate sections, each 1m wide and 1.5 tall, united by a series of bandaged soldiers leading each other across the land.

“It took a long time to paint and everyone in the group participated. One person would paint a horse, for example, one person painted an aeroplane. All different age groups were involved,” she said.

“I think it’s very important to remember the people who devoted their lives to fight for the country. If it wasn’t for them, it would be very different for us all today.

“Everybody knows someone affected by war, it’s part of our history. They’ll be lots of people coming into the shopping centre to see it and it will make them stop and think. A lot of people, especially veterans, care about those who were lost and it’s important to them.”

“Groups like this are great for bringing people together and it’s excellent that they’re able to share their creativity with the wider community, by painting such a stunning picture which is a really fitting tribute for Remembrance Sunday.

“I’d like to thank Victoria, Tony and the rest of the art group for sharing their painting and Stretford Mall for letting it be displayed so prominently. Do go and take a look when you’re next in the Mall!”