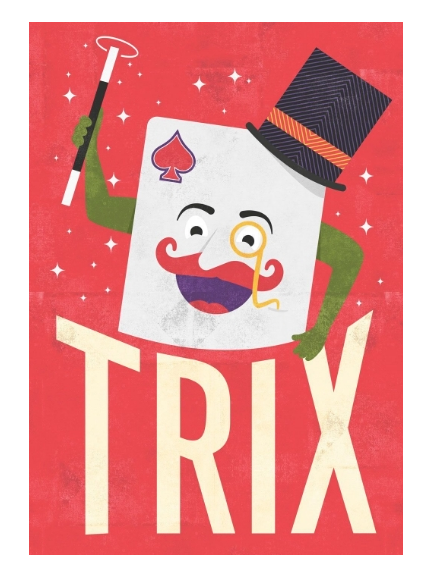 TRIX is a visitor from the enchanted world of Mancunia – where, in a mysterious parallel universe, a city lives that is a near copy of our own beloved Manchester, except for one very big difference… magic!

Slipping through the astral plane, TRIX was enticed to the city by the masses of everyday magic flooding through Manchester people.

TRIX now realises it’s the small differences that make Mancunia very different to our own – a place where the buildings are all upside down, rain spouts upwards from the ground and people’s names are all back to front.

The enchanted card will take over the event’s twitter feed (@Manc_Day) from today until the event on Sunday, 18 June becoming the voice of the city’s flagship summer celebration.

This year’s Manchester Day will celebrate the city with this year’s theme – Abracadabra – that revels in the amazing and charmed achievements by Manchester people through its history.

TRIX joins an illustrious list of much-loved Manchester Day characters who have become embodied as part of the event each year - Gilly the Globefish to Albot² and the larger-than-life Pixel.

This year’s Manchester Day will pay tribute to those who lost their lives in the arena, their families, and those who were injured, when it returns on Sunday 18 June.

The special tribute will be an additional element at the front of the parade and will also honour the heroic efforts of the emergency services who worked tirelessly in the hours and days after the attack.

Now in its eighth year, Manchester Day is the event that best encapsulates the city’s pride, diversity, community spirit, strength and solidarity – a proud celebration of Manchester people and their shared history.

Cllr Pat Karney, Chair of Manchester Day, said: “TRIX has appeared mysteriously in the Manchester Day workshop, feeling the magic of the city – do doubt attracted by the call of Abracadabra by community groups working hard to create the incredible celebration of Manchester.

“Of course, Manchester Day doesn’t appear out of thin air and TRIX will be behind the scenes with all the news between now and 18 June – so be sure to follow @Manc_Day to keep up with the magic of Manchester Day.”

Manchester Day is now in its eighth outing taking on a different theme each year to celebrate the city, its history and our shared future. Each year thousands of structures, artworks, costumes, props – and everything in between – are created at the Wow Workshop by an army of artists and volunteers from the city’s community groups.

With sustainability at its heart, the event tries to reuse and repurpose as much material as possible, saving structures and elements from previous Manchester Day celebrations to be used in future events. The keen eyed may be able to spot various bits and bobs that have been given a new lease of life from year to year…

A key part of the green credentials of Manchester Day is that at no point during the parade will you see a combustion engine. Every large build, small float or prop is human powered – helping to reduce the carbon footprint of the event.

We also encourage the thousands of people who visit the city centre for Manchester Day to travel by public transport, bicycle or on foot to help support the green ambitions of the event.