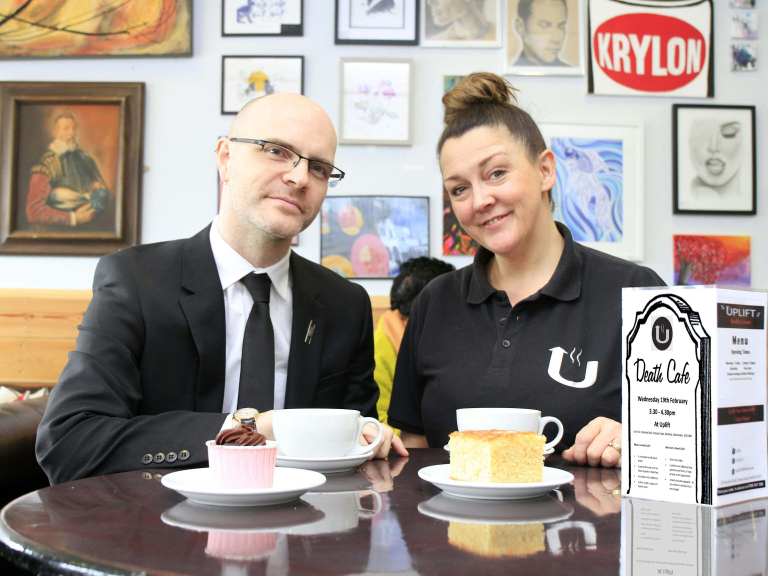 Stretford is to host its first ever 'Death Café' where people can meet up to talk openly about the end of life over a cup of tea and a slice of cake.

Humanist celebrant Mark Adams is will host the event at Uplift cafe at Stretford Mall on February 19, when people will be able to meet up to discuss what is often a taboo subject.

The idea is to provide a relaxed atmosphere so people can talk around the issues people face concerning death, using conversation as a way to help people prepare emotionally, spiritually and practically for when they or their loved ones pass away.

Mark, 41, carries out non-religious funeral ceremonies as part of his humanist role, and is also a local scout leader, and also a part time wrestling ring announcer, and has a talent for talking with people from all walks of life in a wide variety of settings.

He said the inaugural, one hour-long Death Café meeting from 3.30pm is open to anyone, and if successful then it will hopefully become a regular event.

Mark, who lives in Blackfriars, is a big fan of Stretford's close-knit community and has also been a scout leader in the town for the past six years. He has been hosting a weekly pub quiz at Stretford Mall’s Head bar for the last year.

He has also been a part time wrestling announcer for ten years and is friends with WWE star Trent Seven, who fights for the US company's NXT UK brand.

Mark said: "Running a Death Café is something I've always wanted to do. I think it's a great concept and something that is done worldwide. It's a safe place for people to talk about death.

"Death is a taboo subject. It might not be something you feel comfortable talking about down the pub with your mates.

"There is no agenda. It's just a group having a discussion while enjoying a cup of tea and a piece of cake. It's not grief counselling - no one is specifically trained or linked to any religious groups or political movements.

"I just want to keep it casual. If we can get six to eight people coming that would be a nice sized group, but everyone is welcome.

"I really believe in the concept. If you talk about death before you encounter it you may be better prepared for it.

"Uplift is the perfect place to meet. It's local people providing a local service to local people. Stretford has that vibe about it and has for a long time. Now Stretford Mall has added some new venues, and I just love it."

Georgie Grzesiak, who runs the'clean food' cafe Uplift with her husband Paul, said: "We're absolutely delighted to host Stretford’s first Death Café event. I thought it was a fantastic idea when Mark approached me about running it here at the cafe.

"I think it's something that could help us all view what is often seen as a taboo subject in a much better light.

"Since we opened nearly a year ago we've hosted a lot of clubs and activities, and that has helped us become a hub for the community which is brilliant.

"I'm glad so many people see the cafe as a safe and welcoming place to come and get to know other people."

Gareth Wilkins, shopping centre manager at Stretford Mall said: “This is a really interesting concept and fits well with the other social activities provided at Uplift café.

Mark, who is originally from Wolverhampton but has lived in the Manchester area since starting university in 1997, became a Humanist UK-accredited humanist celebrant 18 months ago, after being asked to do a marriage ceremony by friends.

He said: "My brother had a humanist ceremony for his wedding and I thought it was wonderful. I've always been a humanist even if I didn't always know what it was.

"The ceremony focused on the couple and I really liked that. I didn't think any more of it until a couple of friends asked me to do their marriage for them.

"I thought if I'm going to do it I want to do it properly. So I underwent Humanist UK training and then followed weddings up with funerals.

"Eighteen months later and it's my full time job.

"I provide the ceremony they want without the restraints of religion. If you want funny stories or the song Bat Out of Hell, or anything else played at your funeral then it will be.

"It's your ceremony and you find nowadays that some people prepare their own funerals in advance. It's bespoke."

Wrestling is still a big part of Mark's life and he continues to do ring announcing at events in Manchester, Mansfield, Liverpool, Stoke, Leicester and Skelmersdale.

He said: "I've always liked it. My friend - Trent Seven - became a wrestler and said I should give announcing a go. I ended up travelling around the country with it.

"He set up his own wrestling company before joining the WWE and is on the roster there. He's my brother's best mate and godfather to my nephew.

"We still get to see him. We've been to watch him wrestle and I saw him back home over Christmas.

"Since I became a humanist celebrant my focus has been on that but I've been keeping my hand in with the announcing, doing the gigs I want.

"Wrestling is the kind of thing you're meant to grow out of as you get older but not me! I need to keep my knowledge up but that's not an issue to me because I'll happily watch it."

Those attending the Death Café can sit and talk openly about death, discussing their fears and hopes for life as well as their various beliefs.

It is an open forum and there is no agenda or prescription to what can and can't be discussed, although it not designed to be a form of support or bereavement counselling for which people are advised to visit their GP.

Stretford’s first Death Café event will be held at 3.30pm on February 19, at Uplift café at Stretford Mall. You can find the café on Facebook: https://www.facebook.com/buplifted/

Issued for & on behalf of Ceidiog Communication

NEXT STOP RUSSIA FOR REDROW’S STAR BUILDER AND BRICKLAYING MENTOR
Sign up for offers
Sign up for what's on guide
Popular Categories
By clicking 'ACCEPT', you agree to the storing of cookies on your device to enhance site navigation, analyse site usage, and assist in our marketing efforts.
For more information on how we use cookies, please see our Cookie Policy.