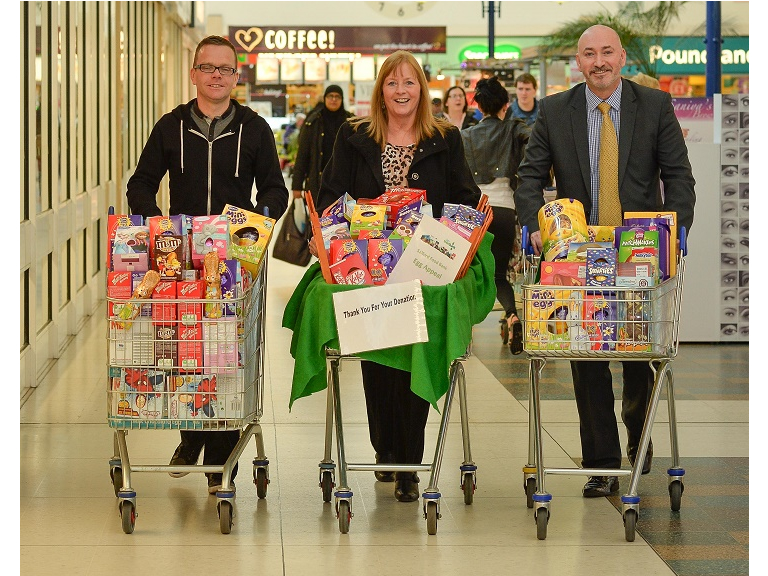 A CHARITY Easter egg collection at Stretford Mall has had an egg-stra boost thanks to the shopping centre’s management team who have donated more than a hundred chocolate eggs to the cause.

The appeal was launched last month by H&T Pawnbrokers who wanted to gather as many eggs as possible to give to the local foodbank.

Already they have accumulated an egg-straordinary 300 chocolate treats, with more than a third of them contributed by the mall’s own management team.

Stretford Mall Duty Manager, Craig Topping, said: “This is a great idea and we applaud H&T’s Manager, Tony Doyle for organising it.

“Sadly there are many families relying heavily on foodbanks at the moment and who certainly won’t be splashing out on treats this Easter.

“This gives us the chance to give a little extra to those that have fallen on hard times and the response from our customers has been fantastic. When we heard that Tony had already got 200 eggs we decided it would be a good idea to use some of the money that is often found in the mall and never claimed to boost the collection.”

The £100 lost property money was spent at Poundworld, where the management team was able to buy 105 Easter eggs to add to the collection for Salford Central Foodbank.

Tony Doyle, Manager of H&T Pawnbrokers, said: “Pardon the pun but it’s been a cracking effort by everyone.

“Visitors to the mall and our own customers have been really supportive. People who come into our store can be those with many thousands of pounds more than I could ever dream of or those simply needing to get through each day.

“As pawnbrokers, H&T staff are well aware of the challenges facing so many people who have fallen on hard times and struggle to pay the bills or even feed their families.”

Tony added: “In our business we’re very aware of the fact that people do what they can to make up the shortfall and for those same people to put their hands in their pockets and buy an Easter egg for someone else takes a lot.

“It really restores your faith in humanity and reminds you that people do care. And if it can bring a smile to a little one’s face then it’s well worthwhile.”

Mark Whittington from Salford Central Foodbank welcomed the amazing response of Stretford Mall customers saying: “It is proving once again that the public understand, support and show empathy for what we’re doing – it is truly great. We are really pleased that the centre is doing this for us.”

Mark, who has been working with the foodbank for six months, is delighted that this Easter he will be handing out sweet treats alongside the daily essentials so many families are relying on.

He said: “We’ve been going for just over two years now and last year we saw a 70 per cent increase in the number of people that come to us.

“In 2014 we fed 3,300 people and 1,300 of those were children. The people that use us are struggling to afford to buy the basics so certainly aren’t going to be buying an Easter egg.

“We normally give them a fairly standard supply of non-perishable basics that will feed them for three days so it is lovely to think we will be able to give them a little something extra.”

Tony added: “We are very much part of the community here and know there are people who just need a helping hand.

“We knew that confectionary wouldn’t be on many people’s list of priorities so it’s great to be able to give them something a little bit different, a bit special.”