Two young ballroom stars who wowed Britain’s Got Talent audiences with their dazzling routines are to help launch a summer season of dance classes at Stretford Mall. 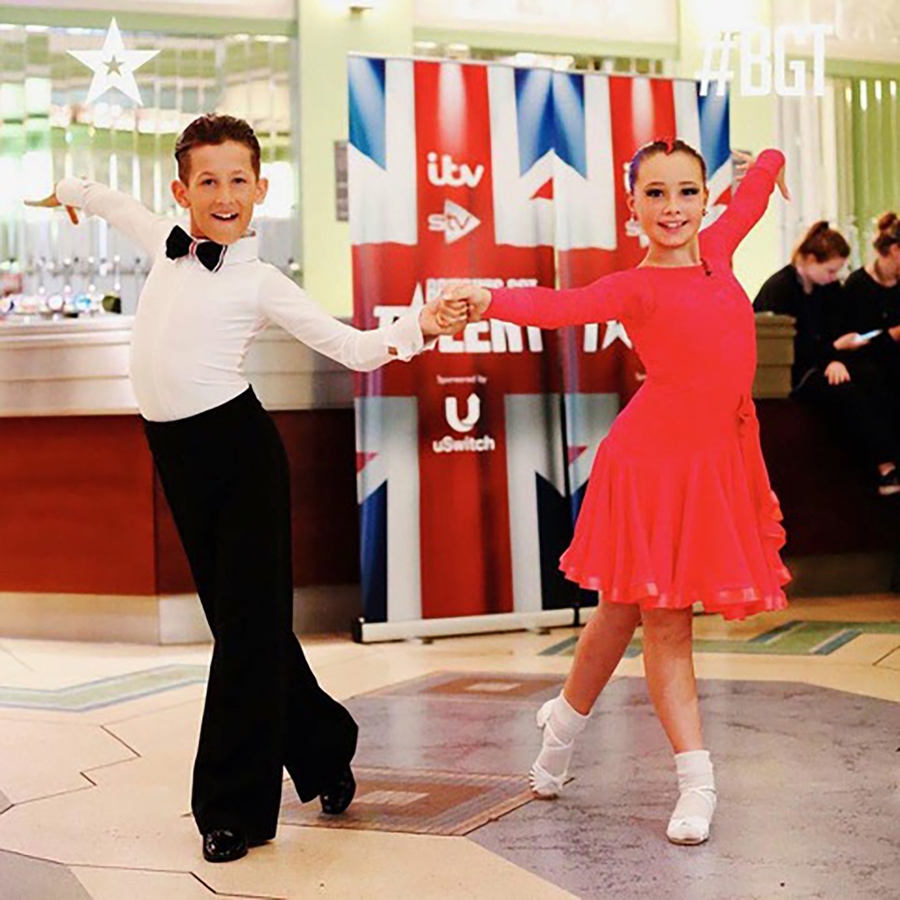 Chistopher Buttle and Lexie Joinson who reached the live semi-finals on BGT, are the faces of the Little Stars dance season at Stretford Mall.

The pair who are were semi-finalists in this year’s BGT show, regularly drop in to practise at the Topaz Dance studio which adjoins the shopping centre. 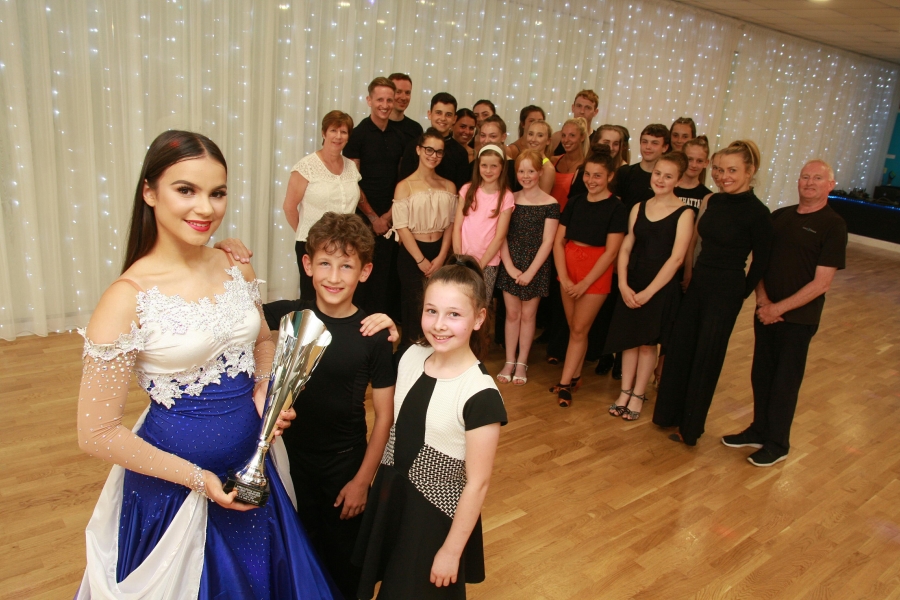 They will be joined by several Topaz Dance pupils, including Amelia Dryden, 14, from Sale, who is a national dance champion.

Young wannabe dancers are invited to join the free lessons led by teachers from Topaz Dance, over four consecutive Thursdays starting on August 9, when Chris and Lexie will be demoing their moves.

In addition there will be daily competitions in which youngsters achieving the fanciest footwork have the chance to win medals, and the top rated dancer of each day goes home with a voucher entitling them to four free Saturday morning sessions at the Topaz school.

Topaz Dance is on King Street just outside Stretford Mall and is very much a family affair. The studio is owned and run by Pat and Tony Savage ably assisted by daughter Zoe and son Christopher who, together with long term friend Melissa Gough, teach many of the children and the competitive dancers. 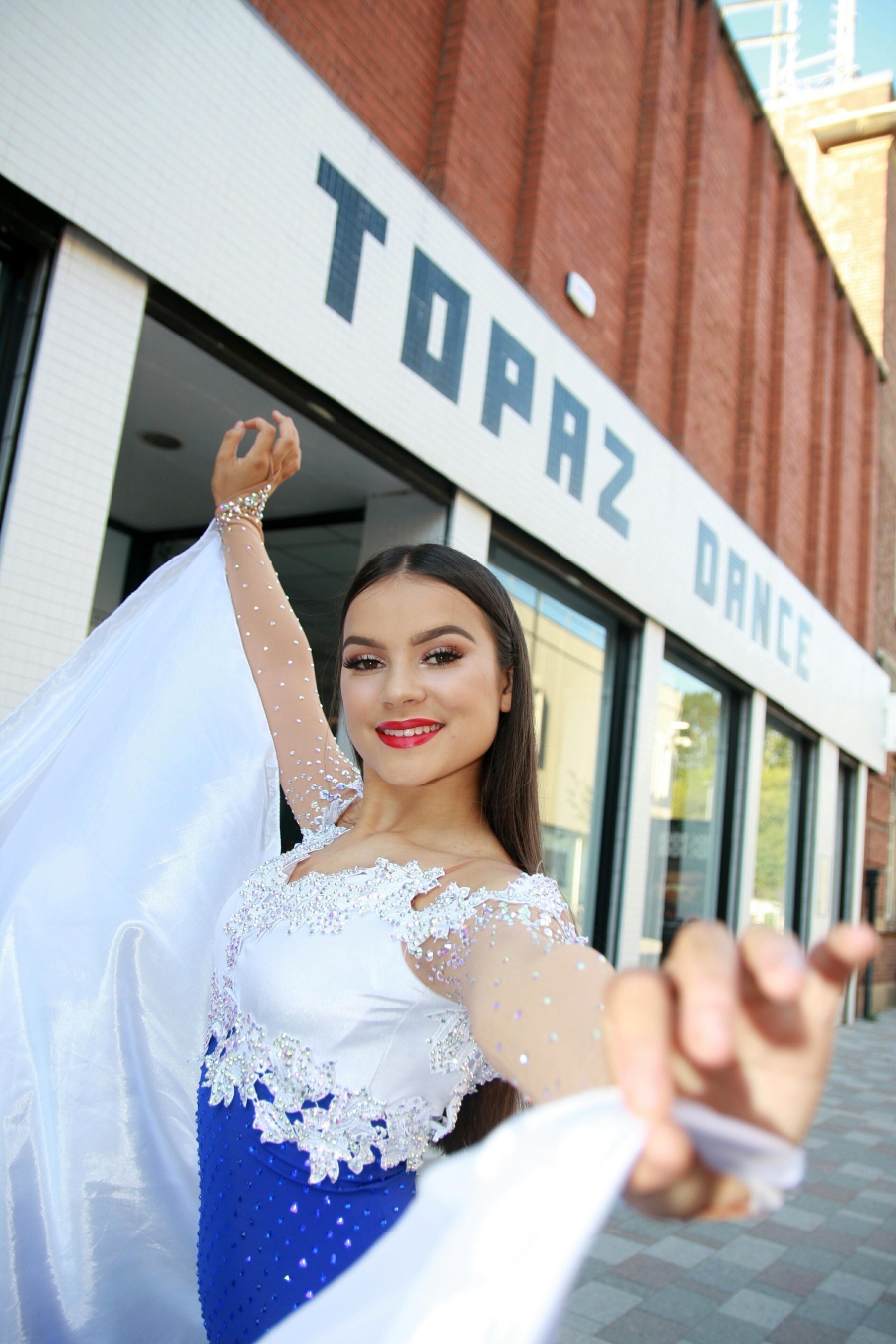 The studio has been open 2-and-a-half years and has quickly gained an outstanding reputation for excellent dance tuition for both competitive and social dancers and pupils have been successful in both local and national competitions. In April this year, one such pupil, Amelia was triumphant at the 2018 International Dance Teachers’ Association championships.

Against tough competition from all over the UK, Amelia, who has been trained by Zoe for many years, scooped the under 16 ballroom title, declaring after the competition that she was ‘surprised and overwhelmed’ by her victory.

Stretford Mall managers are delighted to be helping Pat and Tony spread the joy of dance, while also keeping excited youngsters happily entertained over the school holidays.

Making a guest appearance at the first of the four sessions will be ten-year-old TV stars Christopher Buttle and Lexie Joinson who warmed hearts with their bubbly personalities and animated dance routines on this year’s Britain’s Got Talent series in which they were semi-finalists.

Chris, from Sheffield and Lexie from Manchester, and will officially launch the first ever Little Stars holiday extravaganza at Stretford Mall on Thursday, August 9.

Pat said: “We’re thrilled Chris and Lexie have agreed to come along to support us. They are great characters as well as talented dancers.”

Lexie’s mum Amanda Joinson said: “Topaz has been there from the beginning since Chris and Lexie started dancing together two-and-a-half years ago.

“Pat and Tony have been a great support to the kids. Chris and Lexie are both British National Finalists and Christopher Savage was there watching with us when the results came in.”

Chris’s mum Alison Cuttle said: “They are both really looking forward to the Little Stars at Stretford Mall. It’s just a really fun environment for them to show their talent and pass on their knowledge to other children. Hopefully it will inspire other children to get involved in dance.”

Stretford Mall manager, Gareth Wilkinson, said: “We wanted to lay on something fun and exciting for children when they come to our Mall during the summer holidays.

“The enthusiasm of all ages for dance has really taken off in recent years and we thought it was absolutely the right way to go.

“What better way to keep children entertained, and help them learn some new skills at the same time which can take them hip-hopping and quick-stepping into the future?

“Who knows? We might even find some more potential superstars like Amelia, Chris and Lexie, right here on our doorstep!”

On each of the Thursdays there will be four dance workshops held at Stretford Mall, split into age groups, for: 3-5 year olds, 6-8 year olds and 8-12 year olds.

The fourth workshop will be a special session for party dancing for 3-8 year olds. There will also be a fifth ‘demonstration session’ featuring pupils of Topaz studio. Anyone wishing to join in can simply turn up on Thursday August 9, 16, 23 or 30.

Amelia’s mum, Sarah Foster, is a professional seamstress who owns a dance costumes business, Sara Joy Showroom in Cross Street, Sale. She makes the dazzling costumes for Amelia, as well as for her older sister Francesca, 19, who also loves to dance.

She said: “Amelia has learned such a lot from the Topaz Studio. We’ve known Pat and Tony and the family a long time and are great friends. They are top notch when it comes to teaching all kinds of dance. They really know their stuff.”

Amelia was doubly surprised to win in the IDTA ballroom class as she was more confident about the Latin dance competition in which she also attained a credible third place.

Her mum said: “Latin has always been her favourite. But she has worked really hard on improving her ballroom technique and she was thrilled that all those hours of work have paid off.”

Pat said: “We welcome all ages and all abilities - beginners and the more experienced, those dancing for fun and those who wish to compete.

She and husband Tony have scooped their own share of awards in the past even though they did not start dancing competitively until later years. Over about 15 years they enjoyed success in various competitions, accruing national awards in Supadance team and individual events, before they started teaching”.

Pat said: “I danced a little until I was about 20 but then gave up for years. It wasn’t until I was in my forties that I took it up again and partnered up with Tony. He didn’t start dancing at all until he reached the age of 40”.

Pat added: “For a long time we dreamed about opening our own dance school but with other commitments it just wasn’t possible. However our circumstances changed around five years ago and we decided the time was right to follow our dreams.

“We initially taught out of a primary school before taking over the current building and converting it into the fabulous studio it is today. Running the school is hard work but extremely rewarding”.

To find out more about Stretford Mall visit: stretfordmall.co.uk or find the shopping centre on Facebook or Twitter.