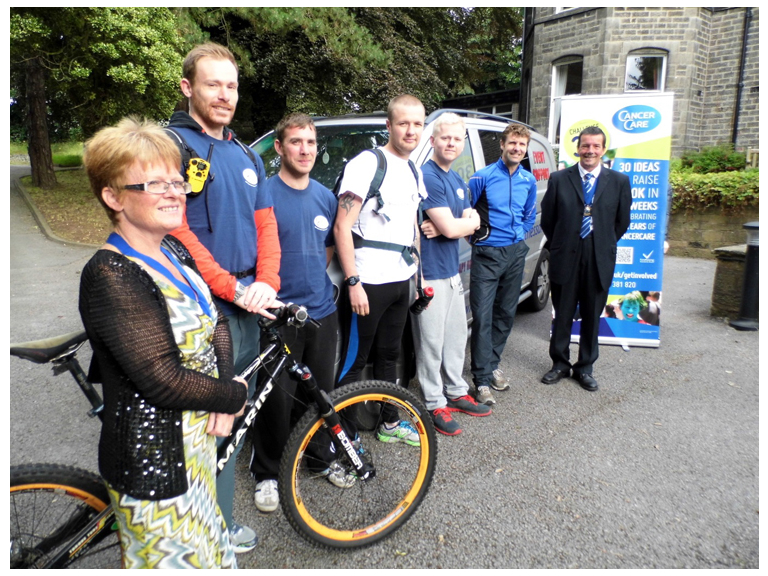 On the 3rd August 2013, Dave ran non-stop from CancerCare’s Lancaster Centre at Slynedales to the charity’s Lakes Centre in Kendal, in a route taking in Morecambe, Carnforth, Silverdale, Arnside, Milnthorpe, Kirkby Lonsdale and Natland on the way, all areas that CancerCare serves.

A former British soldier, Dave, 26, served for over six years with the Queen’s Lancashire Regiment where he began undertaking extreme challenges. He has now been running for over ten years and has experience running in all climates around the globe – from the deserts of Kuwait to training at a wind chill factor of -40 in the Falkland Islands. He runs in all climates, on all terrains, with numerous different weights.

He contacted CancerCare at the beginning of this year and asked them to come up with a challenge for him as part of the charity’s 30th anniversary appeal, Challenge30.

Initially, staff suggested 30 miles – but this wasn’t enough for Dave! He agreed to a 42-mile route around the area that CancerCare serves - carrying a 30lb pack on his back; that’s 1lb for every year that CancerCare has been providing support to local people affected by cancer.

Saturday’s epic challenge began at 8:30am at CancerCare’s Lancaster centre on Slyne Road with a send-off from the CancerCare fundraising team and Deputy Mayor and Mayoress of Lancaster, Councillor David and Mrs Paula Kerr.  After a demanding 10 and a half hours of running non-stop, Dave and his support team - including ex-Forces physical trainers, a radio expert and medical professionals - arrived at CancerCare’s Lakes Centre in Kendal and were warmly welcomed by Kendal Mayor, Councillor Sylvia Emmott, as well as representatives from CancerCare

For 30 years, CancerCare has been dedicated to the support of people with cancer, their families and their carers, and those bereaved by cancer. Services are offered free of charge by professionally qualified staff. Current figures show that 25 people each day are diagnosed with cancer in the North Lancs and South Lakes area alone.

Through Challenge30, the charity is attempting to raise £30,000 in 30 weeks to mark the 30th anniversary. Anyone can join in - a fundraising pack outlining 30 ideas for fun events to raise cash is available from the charity’s website at http://cancercare.org.uk/getinvolved/fundraising-in-your-community

Dave Moretta said: "Training to raise money for a great cause is a lot easier than just training for a race. Knowing what CancerCare do and how they operate and help those in need really spurs me on when training days get a little hard and tedious!"

You can support CancerCare by sponsoring Dave at http://www.justgiving.com/42-Mile-Ultra-Challenge

CancerCare
Why not check out this Charities business in Lancaster. CancerCare is a 'thebestof' business member.
Latest Articles