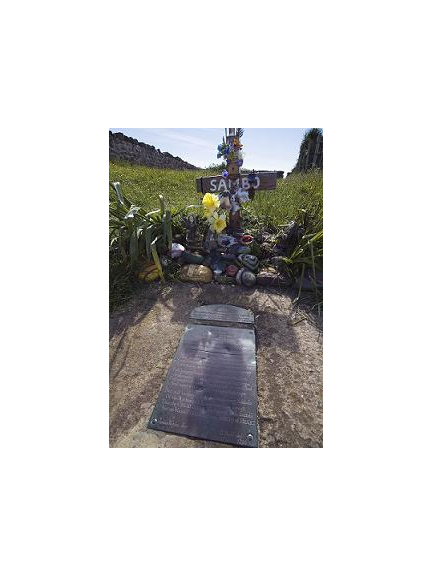 Sunderland, commonly known as Sunderland Point, is on a windswept peninsula between the mouth of the River Lune and Morecambe Bay.

It was used as a port for Slave and Cotton ships but its importance declined as ports such as Lancaster opened up. It is reached from the village of Overton by a causeway which is flooded twice daily at High Tide.

From the parking area next to the toilets at the Sunderland end of the causeway, walk passed the former warehouses and buildings along the quay which have or are being converted into homes and flats. They used to store rum, tobacco and cotton and several are listed as Grade ll.

Turn right at a signpost marked "West Shore & Carr Lane" and follow the pleasant path to the other side of the peninsula. Turn left along the shingle spit and look out for a seat on the left and a set of solid stone steps with a finger post pointing to Sambo’s Grave. Black Africans were almost unheard of in Lancaster, so the master of a slave called Sambo, decided to leave him at Sunderland Point. Unfortunately he died there and an epitaph on a plaque here marks the spot. The grave is well maintained and almost always bears flowers or stones painted by local children.

You can return to the parking area the same way or continue this short walk around the end of the peninsula to take in more beautiful views of Morecambe Bay and the Lune Estuary.