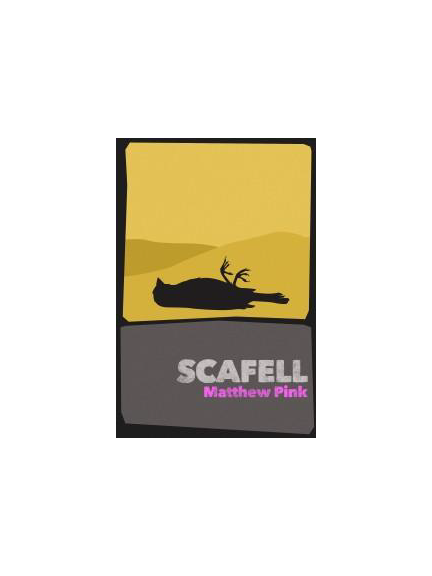 Scafell is Matthew’s debut novel. It is a contemporary crime story set in the North of England, shot through with the humour of the region and sown very much in the left field. It mixes up mystery and surrealism with dry comedy and is set to a soundtrack of rock ‘n’ roll, blues, jazz, country and electronic music. A rum and original noirish blend of murder, birdwatching, rain-drenched landscapes, whisky and evocative music,

A mutilated body popping up lake-side is not the peaceful start Stephen ‘Sparky’ Markham was hoping for when he moved up to the Lake District to come to terms with recent events involving his family.

Across a rain-drenched and wintry landscape, things begin to get bleaker and more surreal for Sparky; his best friend Detective Charlie Slider does a sudden disappearing act; a crafty old nemesis named Leadbetter rears his head unexpectedly; and Sparky finds himself thrust into a weird plot involving fracking magnate Silas Mourner, his aide and a shadowy figure connecting crime networks across Europe.

What Sparky hoped was going to be a cathartic period passing time birdwatching and trail-running the fells, transforms into a hallucinatory and nightmarish world which quickly appears to be a trap laid only for him.

Scafell is Matthew’s debut novel and is available as an e-book via Amazon Kindle and Google Play and downloadable in various formats.

Matthew is a writer and editor now working in digital publishing. He grew up in the rural idyll where Cumbria rubs up against Lancashire, gorging on books and music magazines and surrounded by Swaledale sheep.

He then shuffled off to study languages at the University Of Leeds. From there he moved abroad to work and study in France and Italy, picking up the cinephile virus while studying film in a French university on the way. The French are largely to blame for his love of crime fiction too. Well, the French and the Hardy Boys whose books he used to stuff his suitcase with when holidaying as a nipper.

After an extended period living in Madrid at the end of his studies, he moved to London. Since then the bus of life has made stops in Bristol and Cambridge.

In the more distant past he’s worked as a children’s campsite entertainer, a beater for grouse shoots, a pretend Press Gang officer for the Royal Navy, a guide on witch tours, a sales assistant in an Iraqi shop, a club DJ, and a nursery school teaching assistant.

His arts journalism has focused largely on the use of music and sound design in cinema, but in 2012 he scratched a long-time itch by writing his first crime e-novel Scafell while working in Ecuador, Bolivia and Brazil. There’ll be more to come.

For interviews, review copies or further information please use these contact details: