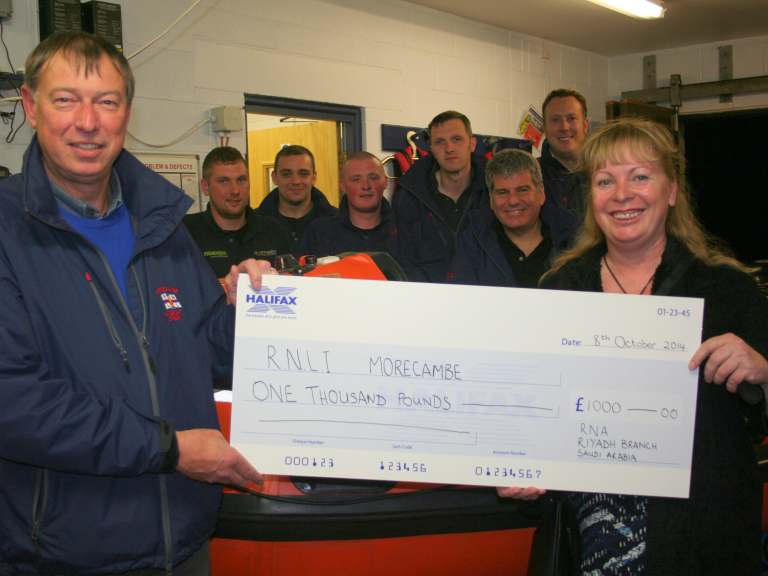 On Wednesday 08 October 2014, Morecambe’s RNLI volunteer lifeboat crew hosted a visit by Karen Wellings, a representative from the Royal Naval Association branch in Riyadh; during which the crew were presented with a cheque for One Thousand Pounds with which to purchase equipment to assist them with their work of saving lives in Morecambe Bay.

Karen, a keen SCUBA diver and instructor who lives and works in Riyadh, explained that ex-pat members of the RNA in Riyadh raise funds for charities throughout the year during various social activities and, when she had been given the opportunity to nominate a recipient, she had chosen the Morecambe Lifeboat Station because she used to live in Preston and gained all her early diving experience in the local area.

Karen informed the Crew about her life and work, she is employed by the King of Saudi Arabia to train local women to become nurses, before being given a guided tour of the Lifeboat and Hovercraft stations; during which, in return, the members of the RNLI volunteer lifeboat crew described their work and demonstrated the craft and equipment they use to pursue it.

Morecambe Lifeboat Station has been operating since 1966.

For more information on the RNLI please visit www.rnli.org.uk.

Key facts about the RNLI

The RNLI charity saves lives at sea. Its volunteers provide a 24-hour search and rescue service around theUnited KingdomandRepublicofIrelandcoasts. The RNLI operates over 230 lifeboat stations in theUKandIrelandand has more than 100 lifeguard units on beaches around theUK. The RNLI is independent of Coastguard and government and depends on voluntary donations and legacies to maintain its rescue service. Since the RNLI was founded in 1824 its lifeboat crews and lifeguards have saved over 137,000 lives.

Carve the Perfect Pumpkin
Sign up for offers
Sign up for what's on guide
Popular Categories
By clicking 'ACCEPT', you agree to the storing of cookies on your device to enhance site navigation, analyse site usage, and assist in our marketing efforts.
For more information on how we use cookies, please see our Cookie Policy.