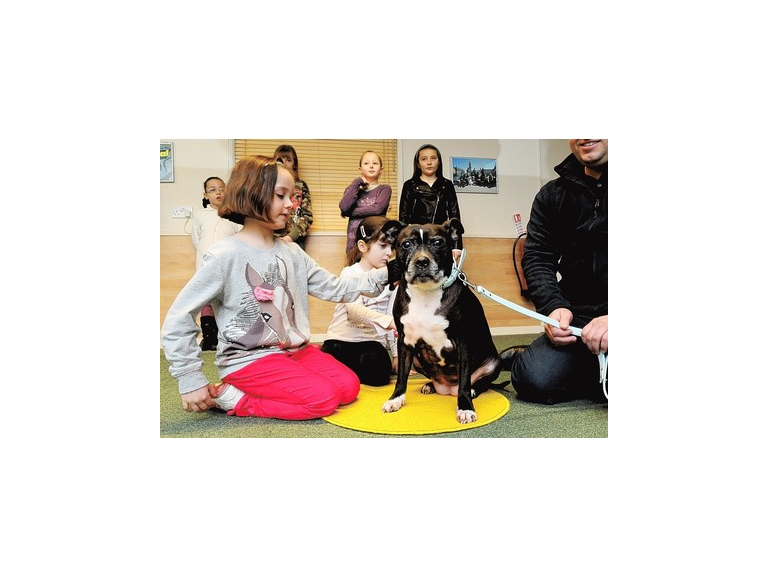 A FOUR-LEGGED friend is helping youngsters in Brentwood feel at ease with dogs – although her breed is often associated with less amiable behaviour.

Cynophobia is the fear of dogs and Cassie will now take part in classes in Brentwood to help cure children of this fear.

The black and white staffie collected her certificate alongside owner Mark Lee last Sunday and has been taking classes with children for four weeks.

Mr Lee, 34, of Burns Way, Hutton, said: "Staffies have a bad name they don't deserve, that's one of the reasons that I put Cassie in for the classes.

"She's a lovely dog and I wanted to be able to show people that staffies can be very friendly and intelligent dogs."

Cassie had to pass a test to become a Cynophobia Assistance Dog and got through without any trouble. She now attends weekly classes at Essex Dog Training Centre in Doddinghurst Road, and helps children get used to the animals alongside 15 others.

Roy Dyer, who runs the classes, said: "Cassie was tested on her temperament, control, canine behaviour and obedience.

"Staffies generally respond very well to training. I've worked with hundreds of dogs of that breed and they are usually great with youngsters.

"The problems, if they do have any, are that they can react very quickly when challenged by another dog. But many do not behave in such a way, for instance Cassie, who works alongside 15 other dogs and is as good as gold."

To pass the tests Cassie had to behave well while being brushed by a stranger, left alone with a stranger, nudged and grabbed – all the things a child might do. She also had to lie down and stay without her owner, run alongside a person and sit with children and leave food alone as asked.

"If a dog jumps up once during training or their assessment, they will not be able to participate in training or retake the test for another year," said Mr Dyer. "This is because jumping up is often what is most feared by those who are scared of dogs."

Mr Lee has owned Cassie since she was a puppy and wants to improve the image of Staffordshire bull terriers.

He said: "People only ever hear the bad about Staffies. Like any dog they should be trained but they tend to be friendly and intelligent.

"Cassie's sessions are going really well and she enjoys the attention. It's nice to be able to educate children and their parents about dogs and show them that the breed is not what they may have expected."