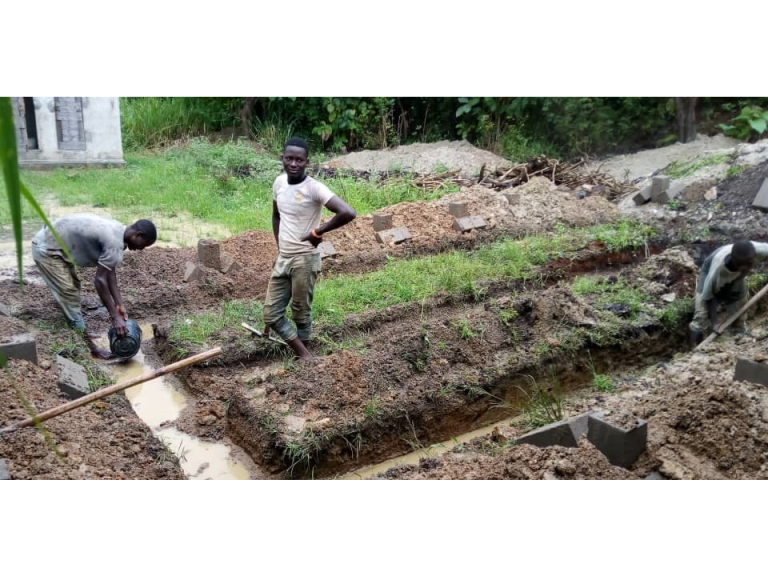 The Edenstone Foundation is working with Compassion UK to help bring clean water and sanitation to a community in Togo.

Homes being built in South Wales and the South West of England have helped lay the foundations for a new toilet block in one of the world’s least developed countries.

The Edenstone Foundation has partnered with Compassion UK to bring clean water and sanitation to a community in the village of Kpele, in the Haho region of Togo, West Africa.

Ahead of World Toilet Day (November 19), the Edenstone Foundation has received an update on the progress being made on a water and sanitation project it’s supporting.

Martin Taylor, managing director of the Edenstone Group, which administers the foundation, said: “Access to water and sanitation is something many of us take for granted, but in Togo seven out of 10 people don’t have access to adequate toilet facilities. We’re helping change that by linking with Compassion, our only overseas partner.

“Ground was broken in August and borehole drilling and construction of a water tower, tank and tapstands began. The borehole is in the room at the bottom of the tower and automatically pumps water up to the tank. The latest development is that the foundations for the new toilet block have now been laid. It’s anticipated that the toilet block will be complete in December. We’re looking forward to seeing further progress made so that more people in Togo have access to clean water.”

In some communities in Togo only three per cent of children can access safe water and for those who can’t, the average distance to the nearest available water source is 14 kilometres.

The Edenstone Foundation has committed funds for a two-year project that will contribute to a solar-powered borehole drilled to up to 85 metres and dressed with PVC. Polytanks and a solar power system will be fitted, with water points and hand-washing facilities installed, with additional piping to be laid in the community.

Once the community has easy access to safe water, phase two of the intervention, a community-led sanitation project, will begin.

Clare Hartley, from Compassion, said: “Investing in sanitation makes a massive difference to communities in countries like Togo. It can result in higher school attendance, improved quality of life and significantly less sickness and child mortality. Improvements in educational participation and a reduction in time and money spent on battling illness means people can instead invest time and resources in their futures. We’re grateful to the Edenstone Foundation for backing the project and enabling us to make a real difference to a community in Kpele in Togo.”

The Edenstone Foundation receives a proportion of the proceeds of every home sold by the Edenstone Group to support communities and causes that help change lives.

The Edenstone Group, based in Magor, is currently building and selling homes across South Wales and the South West of England including in Dinas Powys, Morriston, Lydney and Ross-on-Wye.

Find out more about the Edenstone Foundation via http://edenstonefoundation.com

Issued for & on behalf of the Edenstone Foundation by Active PR.

The Angry Birds Movie
Sign up for offers
Sign up for what's on guide
Popular Categories
By clicking 'ACCEPT', you agree to the storing of cookies on your device to enhance site navigation, analyse site usage, and assist in our marketing efforts.
For more information on how we use cookies, please see our Cookie Policy.