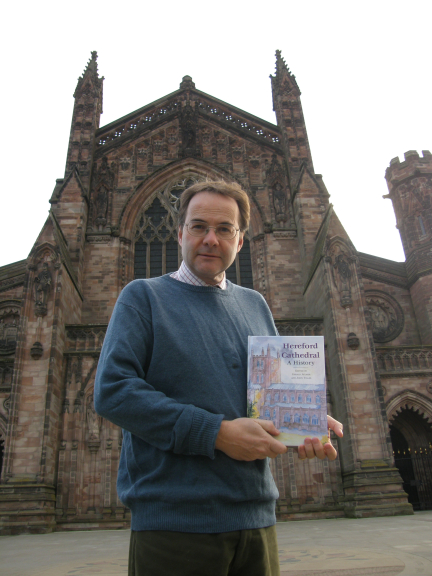 Journalist and broadcaster Quentin Letts will be taking Hereford Cathedral as his specialist subject when he appears on the Christmas edition of BBC Celebrity Mastermind. The Christmas special will be broadcast on Friday 10 January 2014.

‘We are delighted that Quentin chose to take the cathedral for his specialist round,’ said Glyn Morgan, Chief Executive of Hereford Cathedral Perpetual Trust. ‘It will be tremendous coverage for the cathedral and, as Quentin has generously donated his appearance fee to the Trust, we will be getting our own Christmas present!’

Quentin, 50, lives in the diocese and worships regularly at How Caple parish church and at the cathedral. He writes  a column for the diocesan newspaper, is an active member of the Hereford Diocese branch of the Prayer Book Society and describes himself as ‘a middle-stump Anglican, frequently prey to doubts but frequently comforted by church visits - and an enthusiastic blaster-outer of the great hymns of the C of E.’

Quentin, political sketchwriter and theatre critic for the Daily Mail, said: ‘England's cathedrals are among our greatest architectural and cultural gems, and they do not come much more glorious than Hereford’s. I am glad to have been able in a tiny way to support the cathedral at Christmas - although Mastermind was a nerve-wracking ordeal for an intellectual plodder like me.’ said Quentin.

Quentin was up against the actress and singer Clare Grogan, the paralympic champion Richard Whitehead and the singer-songwriter Newton Faulkner but he won't reveal who wins

‘Despite trying to force the result out of him, Quentin remains very tight lipped about the result' says Glyn. 'We will all have to wait with bated breath!'

The Perpetual Trust works to secure external funding for the Cathedral through a program of private giving, legacy promotion, applications to trusts and foundations and an active programme of events.