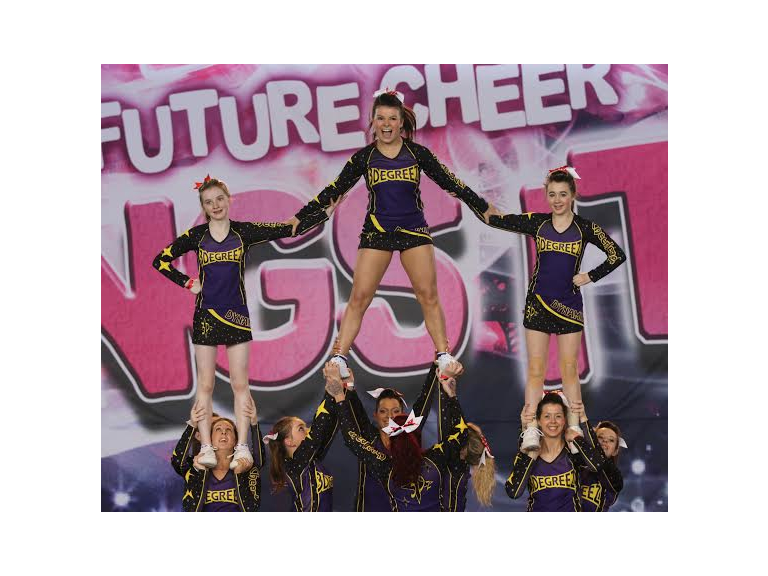 3Degreez took part in their most exciting venture yet and took newly formed 3D Elite team to compete at Disneyland Paris in March. The girls invoilved, who are regular members of the teens squad Dynamix and adult squad Distinction were auditioned to gain a part in the Elite team.

The competition was a fantastic new Level 2 routine, Katie and Ruth are really proud of their girls for doing such an amazing job at hitting extremely challenging and hard stunts. They excel in performance skills, with most of our girls having dance backgrounds. They came away from this competition with a shiny trophy displaying their well deserved 6th place position against many international teams.

It was a dream to take the team to Disney to compete, but adding to the exciting experience was being accepted, through an audition process, to be a part of the parade, and asked to lead the parade at the front!

The parade took place throgh the park, watched by hundreds of guests. The Disneyland Paris performing arts directors structured a rehearsal for all sucessful cheerleaders chosen to be part of the parade, within this rehearsal we were selected to be at the front of the parade and confidently lead the other 350 cheerleaders through the park.

Quoted from Disneyland Paris performing Arts Director 'you have achieved exactly what we have asked of you, you know the routine perfectly, are really sharp and precise, and most of all, you smile with confidence and pride!' Our girls were also offered to personally contact the performing arts directors we worked along side regarding work at Disneyland Paris, within their parade dancers and characters teams.

This team have achieved something of a magical dream and there is no doubt that out of many international teams, these 11 girls should be extremely happy and pround of what they have shown small Hereford can do. 11 out of 350 cheerleaders and we were top!!