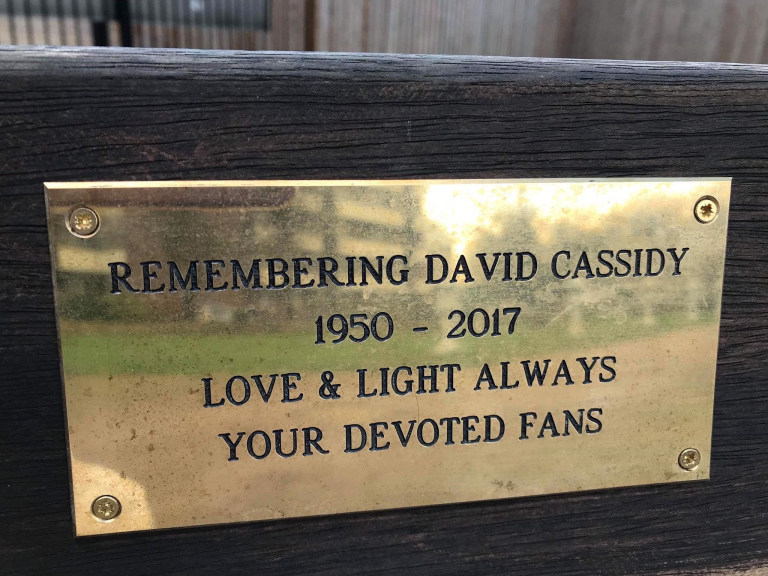 As part of a legacy trail for the late American Star David Cassidy a plaque has recently been placed on a bench at London's Hammersmith Park .

A £300 donation to The British Thoroughbred Retraining Centre in honour of David’s love of Race Horses was also raised by fans.

David made several appearances at the Hammersmith Apollo.

The American singer, whom was born and brought up in New York came over to the UK and held his concerts in Hammersmith, London as well as other cities in the UK .
At the age of 21, David Cassidy became the world’s highest-paid live entertainer after launching his solo career as a singer. His official fan club was the largest in pop history exceeding that of Elvis Presley and The Beatles. 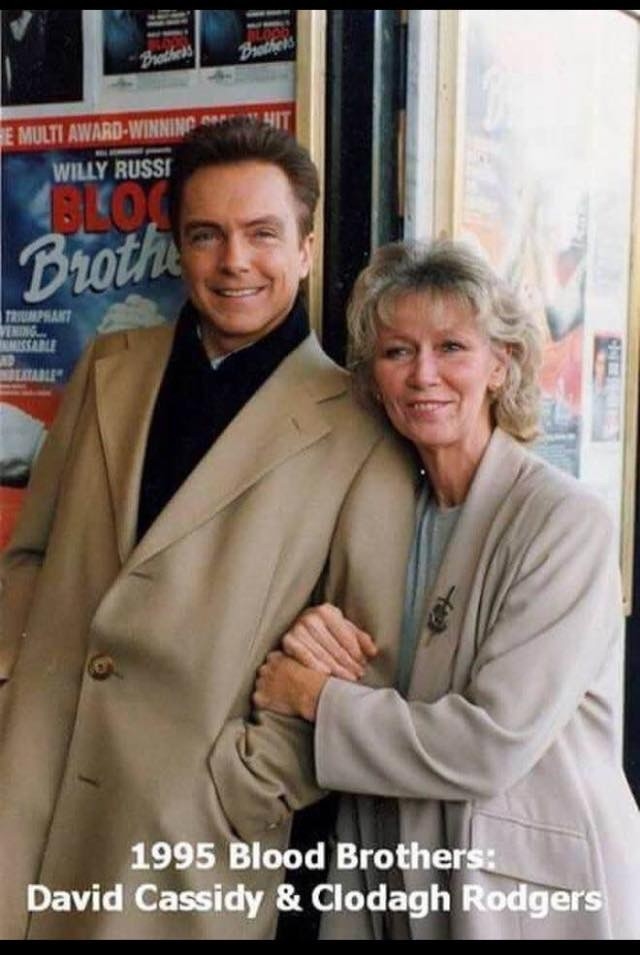 David also performed in London theatre including Dave Clark’s show “Time the Musical”  in 1987.
He further performed on stage at the Phoenix Theatre London in Willy Russell’s Blood Brothers in 1995.
His fans have also secured a plaque above the stage door of the Phoenix Theatre and donated over £700 to Dementia UK and £200 for Mind charity. 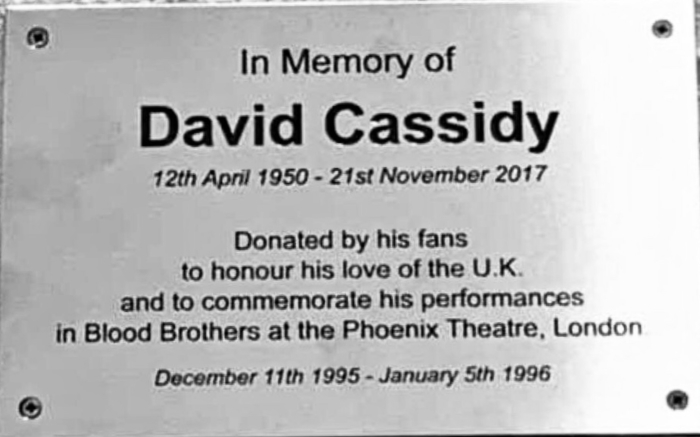 This plaque was unveiled last September by DJ Mike Read whom was a friend of David’s during his UK visits. Other tributes include a star in the Hall of Fame at the Bristol Hippodrome where David performed in Blood Brothers with Clodagh Rogers.
A tribute artwork was installed within the foyer at Wembley Stadium to mark 46 years since a notable attendance record was set by David Cassidy in his first tour of Great Britain in 1973, when he sold out six performances in one weekend.
The experience and the associated mass hysteria was documented in a TV special called "David Cassidy: Weekend At Wembley".
The framed picture was installed in a glass display cabinet alongside some of the Great performers and attendees at Wembley Stadium. Visitors may see the display during opening times but it’s best to check the box office opening times before attending.
On the 12th April 2019 a Get together at the Phoenix Theatre, London was attended by fans whom celebrated what would have been David Cassidys 69th birthday. At the event , a total of £213 was raised for “Variety the children’s charity.” . Many thanks to the management at the theatre for their support and co operation.
David Cassidy supported many children’s charities , some of which can be found on the official website of David Cassidy http://www.davidcassidy.com/fansite/BiographyPages/Charities.html
As part of Davids UK legacy the David Cassidy UK Legacy and Tribute Group on Facebook have also installed a plaque within the Phoenix Garden which is opposite the Phoenix Theatre, London. The garden which is run by volunteers provides a location to enjoy natural surroundings in a busy West End London area whilst visiting the Phoenix Theatre Plaque. It’s also advised to check opening times of the garden on their website . https://www.thephoenixgarden.org/ 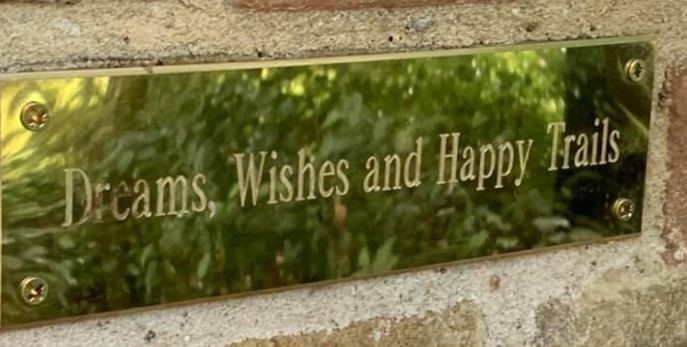 The plaque with the words “Dreams, Wishes and Happy Trails “ are symbolic words to Davids many fans and is commemorated by a Just Giving Page for the Wishes Foundation Uk , which helps enables seriously ill children to have their wishes and dreams become a reality.
https://www.justgiving.com/fundraising/sharronliddle1simplesitecom
While continuing Davids Legacy Trail in the Uk , many charities have been supported in Davids memory .  Details are on  the pages https://www.facebook.com/DCgbteam/ and on the David Cassidy Animal Charities Page https://www.facebook.com/animalcharit/
David Cassidy was remembered for his visits and performance on the tarmac at Heathrow Airport 1973 with a plaque in the Queens departures lounge as part of Heathrow’s 70years celebrations, (below). 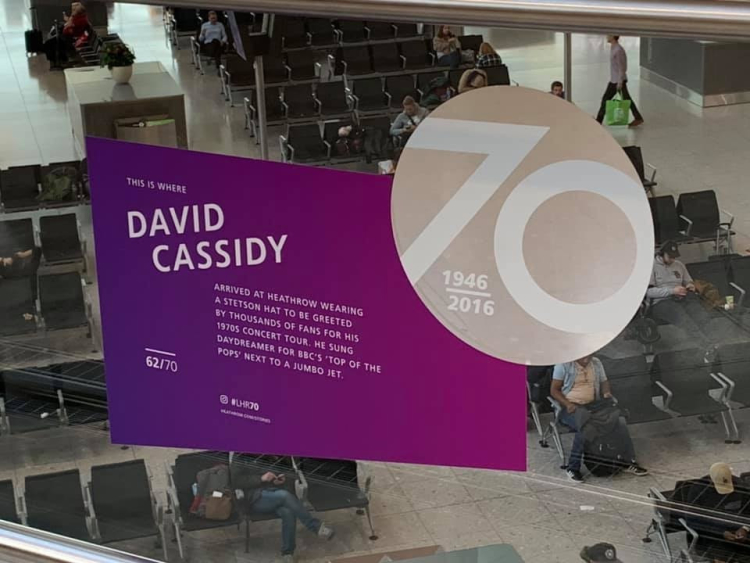 At Nottingham Concert Hall a seat plaque was placed on seat A16 to commemorate his performances at the venue. 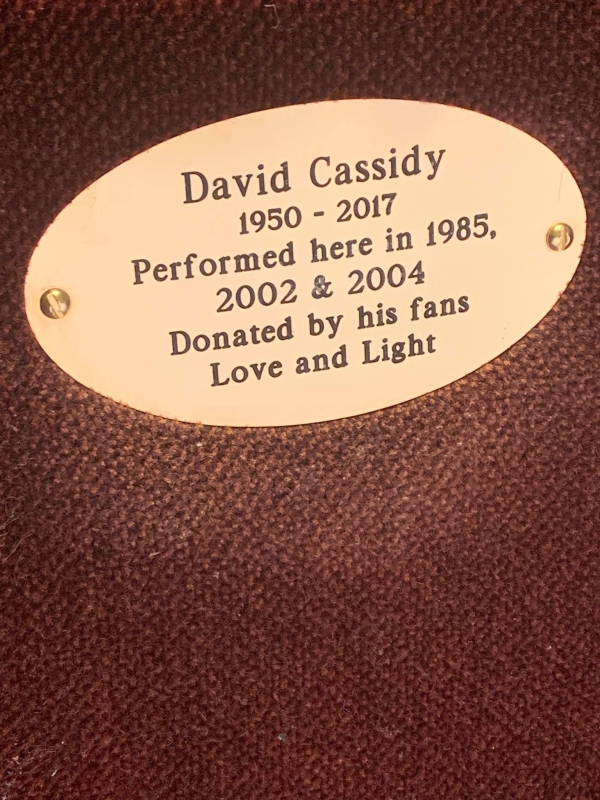 A steel heart (below), was dedicated to David to commemorate and remember Davids many performances at Sheffield UK. 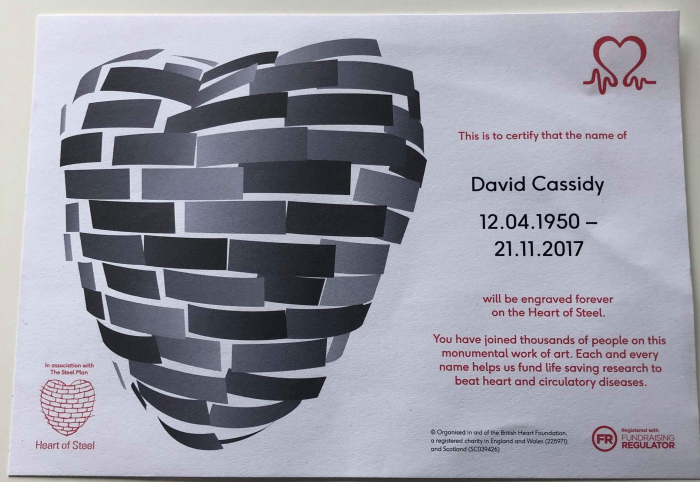 For Details and information on the David Cassidy Plaque at the Phoenix Theatre, The Phoenix Garden ,The St Giles church where fans remember David on November 21st each year and The St Giles Hotel where fans placed a portrait of David in the Hudson’s Bar in the hotel, visit the Facebook Pages https://www.facebook.com/Dcgbteam1/
Instagram gbgr.oup 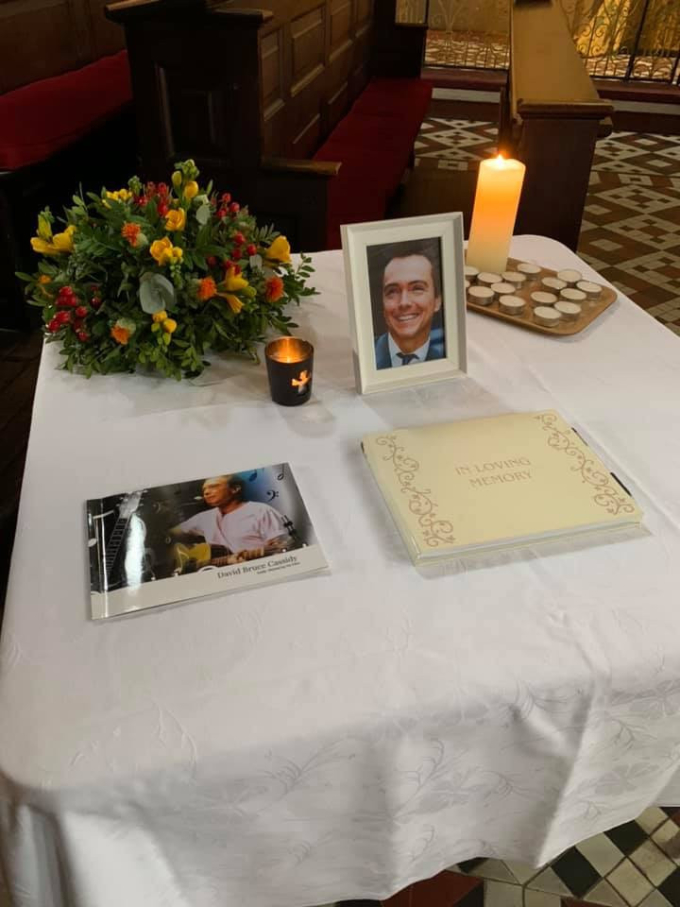 St Giles Church memorial
On April 12th 2020 ( Davids 70th birthday) , fans are meeting in London to take a tour of London on a vintage double decker bus , taking in locations including Hammersmith Park and The Phoenix Theatre. Details of this can also be found on the pages or the ticket sales https://ticketease.co.uk/event/the-david-cassidy-group-of-great-britain/2020/04/david-cassidy-fans-london-bus-tour
All details of tributes and memorials to the late David Cassidy can be found on the The David Cassidy Uk Tribute and Memorials Group Facebook Page https://m.facebook.com/DCgbteam/
Information and updates on the Phoenix Theatre Plaque can be found on the Facebook Page https://www.facebook.com/Dcgbteam1/ .
Other tributes and memorials are being planned for David here in the Uk .
Information on the tributes can be found on our Facebook pages
Issued for and on behalf of Sharon Liddle and Hammersmith Apollo
Main Image - The bench in Hammersmith Park with the Plaque  in David Cassidy's Honour.
More

IDEAL HOME SHOW CHRISTMAS RETURNS FOR 2018
Sign up for offers
Sign up for what's on guide
Popular Categories
By clicking 'ACCEPT', you agree to the storing of cookies on your device to enhance site navigation, analyse site usage, and assist in our marketing efforts.
For more information on how we use cookies, please see our Cookie Policy.