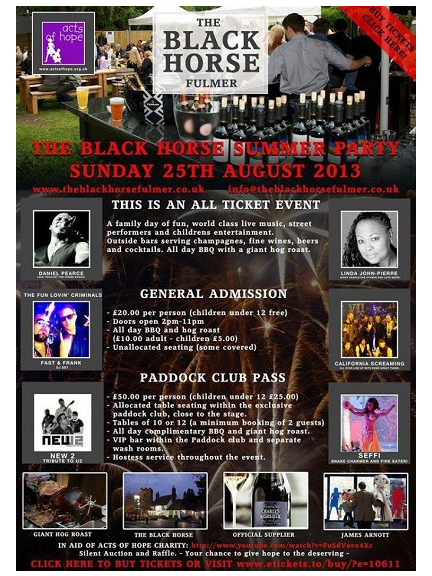 It gives me great pleasure to be able to bring local people news of this fabulous event!

The Black Horse Pub in Fulmer is hosting a Garden Party on 25th August 2013.

The line up of live music is impressive and it's great to see that they are supporting a locally based children's charity, Acts of Hope.

DJ sets will be provided by Frank and Fast from the Fun Lovin' Criminals.

There will be a children's entertainer as well as a snake charmer together with an all day BBQ and Hog Roast!

Since the new owners have taken over the pub, there has been the addition of two beautiful boutique bed rooms and the pub has undergone a major refurbishment inside and out.

The new management team have introduced an exciting new menu which will be changed seasonally.

The village of Fulmer has never seen this kind of event before and the new owners are keen to be a focal point for the local community.

By organising this event they hope to put The Black Horse firmly on the map as well as giving people an event to look forward to.

The Acts of Hope Charitable Trust

The Acts of Hope High School provides free education to poor children living in the urban slums of India. We believe that education is their only escape from poverty, desperation and exploitation.

The Acts of Hope School in Kasavanhalli has been working in the slum villages on the outskirts of Bangalore since 1999. We now have more than 400 children in the school. Every day they are bused in from their villages to take lessons in: english, mathematics, science, information technology, social studies, local languages and local culture.

The urban poor have little state support. Their average income does not cover the escalating cost of food and rent. Without Acts of Hope these children would have no education. They will be trapped in grinding poverty and used for cheap labour.

The school began in 1999 when a family from the UK saw the plight of the children of the migrant labourers attracted to Bangalore. The family decided to act and bought a small plot of land where they built a nursery school.

Since then Acts of Hope has expanded its curriculum, built a team of qualified local teachers and added classrooms and buildings to accommodate the ever growing number of children. There is no selection policy and we take as many of the most disadvantaged children as we can. The school provides: books, transport, uniforms, lunches and annual medical examinations.

AoH is licensed by the State of Karnataka to teach to the 10th Standard, the final year of high school. So far 27 children have sat the state board exams. Pass rates are excellent.

In August 2013 an AoH pupil was accepted for a degree course in Engineering and Technology at one of Bangalore's best colleges.

For more information about Acts of Hope have a look at their website here.

To view an informative video about Acts of Hope Charity please use this link here.

Hi! I'm here because Gerrards Cross is a beautiful place to live and it is a community worth supporting. Make thebestofgerrardscross a really great local hub, it's here for you!