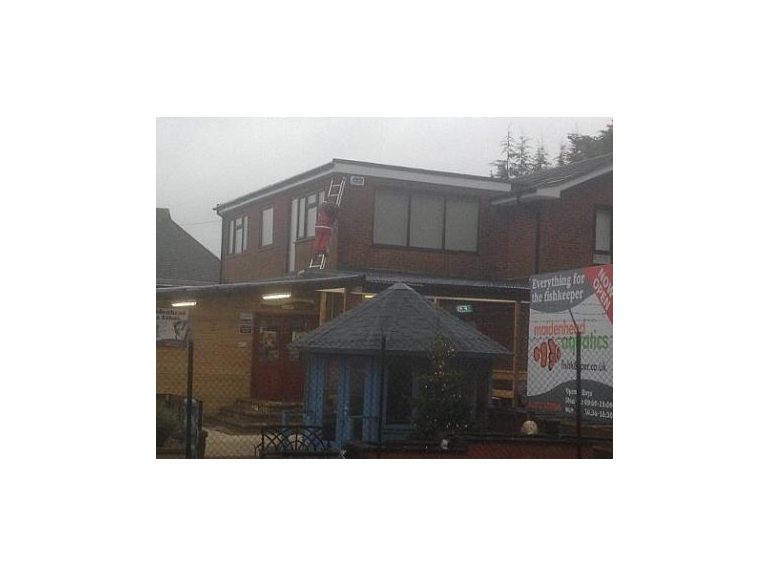 Santa Claus is back on the roof of an Ashtead shop after making a surprise appearance there last year.

Maidenhead Aquatics, new owners of the building, brought the Christmas tradition back to life by putting Santa up on Thursday night.

Last Christmas his absence disappointed families because the previous owner Cane Connection, who had been putting an inflatable Santa up for years, had left the site.

In fact a well-meaning local vigilante was so determined to keep the Christmas tradition alive for children that they broke in through a hole in the fence and erected a home-made Santa.

But this year there is no need as the shop's new owners have made sure Santa is in his traditional spot.

Terry Murray, who works at the aquatics retailer that opened in May, said: "I know a lot of people wanted to see the tradition restored here so I’m sure it won’t go unnoticed.

"I think the people who have seen him are very glad he is there again."

But the mystery unravelled when an anonymous resident, who has lived in the area for over 50 years, wrote a letter owning up.

The letter said: "Over the years we often observed Santa Claus climbing up a ladder onto the roof of the garden centre on the left between Ashtead and Epsom, so much so that it became a kind of Christmas tradition to look out for him on our way past.

"I was dismayed to discover that the garden centre had closed and therefore Santa was not due to make an appearance.

"I decided to take matters into my own hands and created a Santa Claus from odds and sods, climbed through a hole in the fence and put him in myself."

It added: "I sincerely apologise for causing you any trouble, it wasn’t my intention.

"I was merely trying to keep the Christmas dream alive for my children and the children of Epsom and Ashtead."

Article and pictures from Alice Foster at epsomguardian