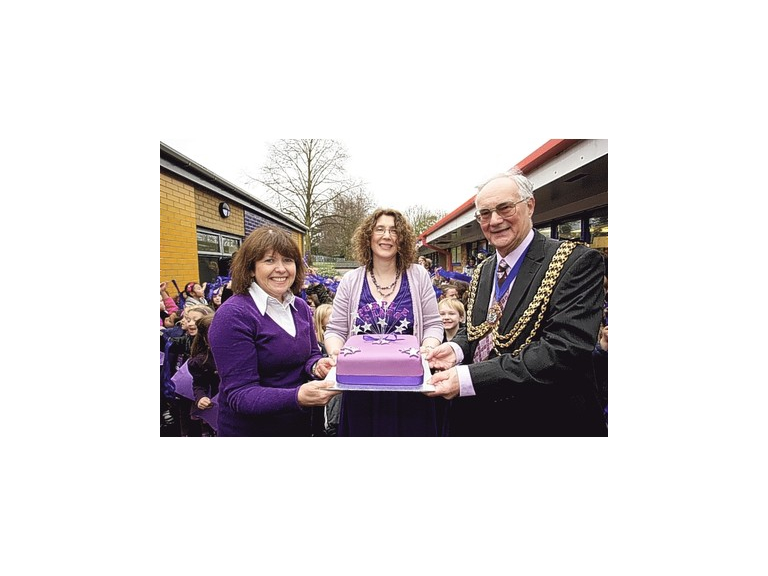 A PLETHORA of purple marked the official unveiling of a school's new classroom.

All staff and pupils dressed in purple to unveil the new Purple Class at Banstead Infant School, and waved purple ribbons and ate cake – a purple one of course.

The new room, which took three months to build, will allow the school to expand in size to help meet a growing demand for primary places. From September 2014, the school, in The Horseshoe, will take an extra 10 pupils per year, bringing the intake up to a full three classes in each year group.

The classroom cost £225,000 to build and kit out. A Year 2 class moved in as soon as it was finished in November but waited until last month to celebrate the new addition, with the help of the Mayor of Reigate and Banstead, Roger Newstead.

Year 2 class teacher and deputy head, Stephanie Storrar, said: "We didn't want to leave it empty. It is such a lovely classroom so we decided not to leave it for almost two school years. It has got its own practical work area, own toilets and cloakroom so it is a self-contained unit."

Mrs Storrar had the honour of selecting the new classroom's name.

"All our classes are named after colours," she said.

"My favourite is purple, we had a lilac but now we've got a purple too.

"It is a wonderful addition to the school. The children really like the building, it's got two clear domes in the roof so they can see the sky through the ceiling. They said 'its amazing because there are holes in the ceiling but luckily there is glass over them so the rain doesn't come through'.

"It is a great learning environment, so they are very lucky."

Article and picture from Jenny Seymour at thisissurreytoday