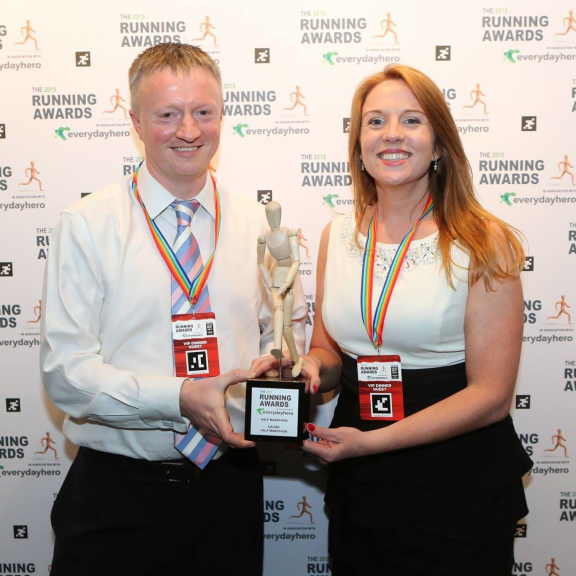 The Running Awards are the only independent annual awards ceremony celebrating the best of running and its culture as voted by runners.

Race director Kelvin Walker and race coordinator Sandra Courtney were at the awards ceremony at indigo, at The O2, last Friday (April 24).

They were presented with their trophy from Mike Bushell in front of a room full of A-list names from the running and sports industry.

Kelvin Walker said: “We are overwhelmed to win the Best Half Marathon category for the second year in a row and to beat some very big and well established races.

"We are so proud of our community and our followers who helped us get here, and we would like to thank each and every one who has voted for us.

"A huge thank you also goes to all our 500 volunteers on the day and to our hard working committee that enable this fantastic event to happen.”

Sandra Courtney added: “We have got a very loyal following and with the Ealing Half Marathon being a Community Interest Company (CIC), which exists to benefit the community rather than private shareholders, the race gets a lot of support from local businesses, residents and runners.

“Places to the UK’s Best Half Marathon are currently still available and we are looking forward to another great race in September.”

The fourth Ealing Half Marathon takes place on Sunday September 27 and is well-known for its huge community support with runners travelling from all over the UK and abroad to experience the Ealing feeling.

The award-winning Ealing Half Marathon is a firm fixture in the autumn running calendar, with runners of all levels aspiring to be on the start line this September.

A total of 8,000 places are available for 2015, with entry fees of £34 for affiliated runners and £36 for unaffiliated runners, which includes a medal and online e-goody bag for all finishers. The start, finish and race village are in Lammas Park.