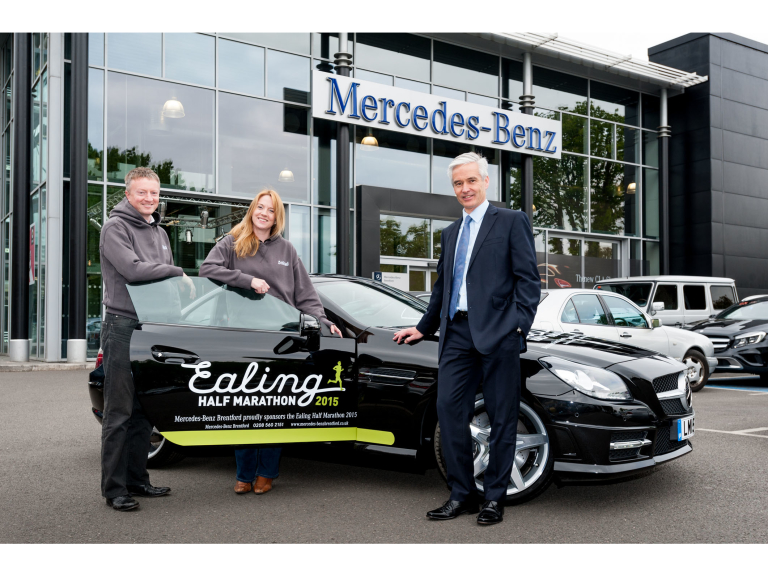 This year’s Ealing Half Marathon has been given added horsepower after unveilling Mercedes-Benz Brentford as a sponsor.

It will be deploying a Mercedes-Benz SLK car around the borough in the months leading up to the race to publicise it.

The fourth Ealing Half Marathon will be held on Sunday September 27 and is expected to see around 8,000 runners lining up at the start Lammas Park in Ealing, including participants from across the UK and abroad.

A team from Mercedes-Benz Brentford will be taking part in the race and raising money for Macmillan Cancer Support.

One of those will be Trevor Webb, general manager at Mercedes-Benz Brentford, who said: “We are pleased to be associated with the Ealing Half Marathon for the third year. The race has become an important event in the running calendar. It is also a good opportunity to raise money for Macmillan, not to mention helping to keep our staff fit!”

Event co-ordinator Sandra Courtney said: “We are proud to welcome Mercedes-Benz Brentford back on board as a sponsor of the Ealing Half Marathon 2015. It’s great to get so much support from local businesses, runners and residents, and we are looking forward to raising further awareness of the race and to encouraging more runners to sign up.”

Places are still available for this year’s half marathon. Entry costs are £34 for affiliated runners and £36 for anyone unaffiliated and runners are encouraged to raise money for the headline charity Alzheimer’s Society.

All finishers receive a medal and online e-goody bag and they get entered into a draw to win a Mercedes bike.

See www.ealinghalfmarathon.com for race details and to sign up.