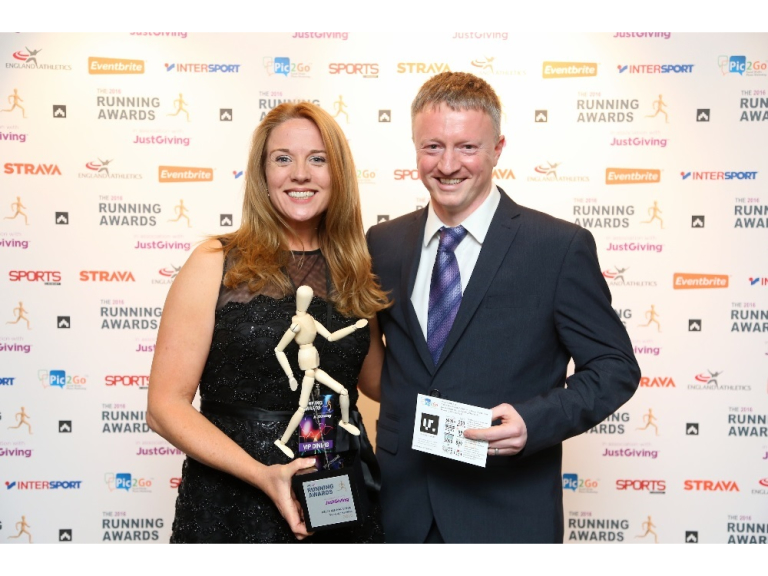 The Ealing Half Marathon has been voted ‘Best Half Marathon’ for the third year running at The 2016 Running Awards in association with JustGiving. The West London race was awarded gold after receiving the most votes by runners at the only independent awards ceremony which celebrates the best of running and its culture.

Race Director Kelvin Walker and Race Co-ordinator Sandra Courtney were at the prestigious awards ceremony at indigo at The O2 in London on Friday 22nd April. They were presented with their trophy by BBC sports presenter Mike Bushell in front of a room of A-list names within the running and sports industry.

Kelvin Walker commented: “We are absolutely thrilled to win the Best Half Marathon category for the third year running. When our name was called out I felt very emotional and incredibly proud of our community and supporters who have helped us to get here. As a not-for-profit Community Interest Company, the Ealing Half Marathon funds a variety of projects and activities within the local community, and our triple gold is a great tribute to all the hard work and commitment that has gone into making this possible. We would like to thank all those who voted and of course our many volunteers and dedicated committee”.

Sandra Courtney added: “It is beyond our dreams to win gold for the third year running! We never would have thought it possible when we set up the race five years ago, but it just goes to show what you can achieve with determination, fantastic community support and a positive vision. The race is getting bigger and better and we hope that more people will come to experience the #EalingFeeling.

There are still places available for the Ealing Half Marathon in September and we are looking forward to filling the streets for the UK’s best half marathon!

The Ealing Half Marathon starts and finishes in Lammas Park and features a 13.1 mile route on closed roads around the leafy streets and parks of the West London Borough.

The race has raised over £850,000 since its inauguration in 2012, and is looking forward to welcoming 8,000 runners of all abilities to its fifth anniversary race on Sunday 25th September 2016. It is well known for its huge support and great atmosphere, with runners travelling from all over the UK and abroad to experience the #EalingFeeling.

Alzheimer’s Society, Cancer Research UK and CLIC Sargent are the Official Charity Partners for the Ealing Half Marathon 2016.