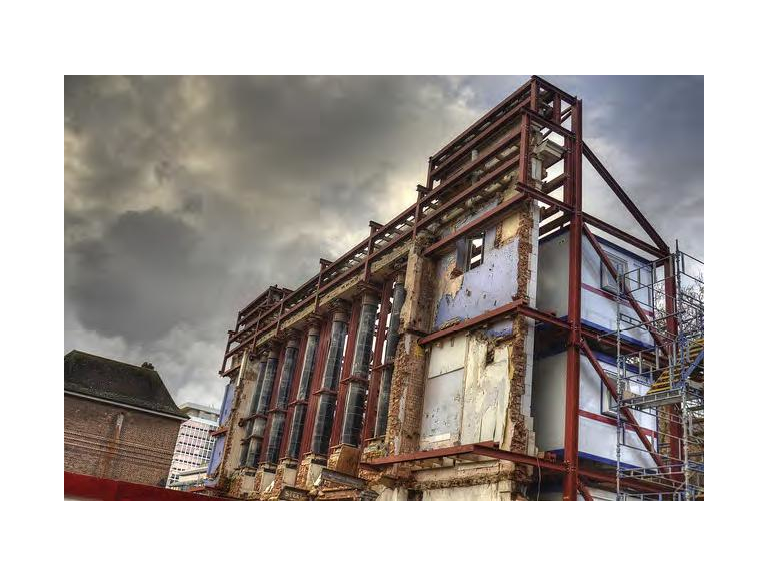 It is nearly 5 years since the Empire Cinema on the Uxbridge Road closed its doors and soon after most of the building was demolished, leaving the listed quasi-Egyptian facade of the original Forum picture palace built in 1934 behind scaffolding.

With such a great film heritage here in Ealing, it has been a very sorry state of affairs as far as many residents are concerned to see the demolished cinema site just a short distance from the famous Ealing Studios which have given Ealing comedies to the world.

It is also an eyesore as well as a headache for the council in the building opposite and the rapidly advancing, aspirational Dicken’s Yard development adjacent.

The cinema has been the cause of untold wrangling between Ealing Council and the owners, with a recent compulsory purchase order and the appointment of Land Securities as Ealing Council’s preferred development partner for the site.

Their development plans for a £100million film quarter known as Filmworks complete with a multiplex cinema, film museum and art studios as well as flats, new cafes, bars and restaurants and a Cinema Square with a giant video wall available for events and concerts are impressive.

The scheme also includes opening up pedestrian streets and creating a throughfare from New Broadway through to Bond Street.

Residents were able to view these proposals in Ealing Broadway Shopping Centre over the weekend and Land Securities intends to submit a formal planning application to Ealing Council later in the summer.

Whilst the Land Securities scheme could be just the investment that is needed to bring film back to the heart of Ealing it will still be a while (at least until 2018) before it’s complete.

Community initiatives such as Pitshanger Pictures in St Barnabas Church Hall and the Classic Cinema Club at Ealing Town Hall on Friday nights have kept movie viewing alive in Ealing in addition to Vue Cinema at Park Royal.

However many residents now choose to head to Westfield when they are going to the cinema because of the varied pre- and post-film entertainment and dining options so local businesses in Ealing Broadway are also affected by the continuing lack of a cinema in Ealing.

In the light of this impoverished scene, Nomad Cinemas are to screen films as part of the Ealing Summer Festival – School of Rock (PG) and This is Spinal Tap (15) on Sunday 14th July as well as Adam Buxton’s Best of Bug: The Evolution of Music Video (16+) on Monday 15th July. For details and to book tickets check out http://www.whereisthenomad.com/venues/ealing-summer-screenings.

Nomad Cinemas are also screening Australian cult classic Priscilla Queen of The Desert at Boston Manor on Friday 9th August prior to the Homelanz festival the following day.

Now another initiative from Ealing Broadway Business Investment District (BID) together with Ealing Council and Land Securities has been announced – a pop up cinema for cult and contemporary classics. Showing films on a huge outdoor screen in a secret rooftop garden on the 7th floor of Springbridge Road car park, the pop up cinema will have room for 200 guests to enjoy films using wireless headphones and sitting in comfy deckchairs.

The rooftop cinema will open on Wednesday July 31 and continue for a 6 week period until 8th September. The Rooftop Film Club will be showing films such as Anchorman, Labyrinth, Top Gun, The Goonies, Breakfast at Tiffany's, The Artist, The Big Lebowski, The Lost Boys, Silver Linings Playbook.

The pop up cinema will be open from Wednesday to Sunday with the bar opening at 7pm and films being shown between sunset and 11.30pm. To sign up for further information please visit http://therooftopsociety.com/cinema Tickets at the Rooftop Film Club’s other London venues are £12

So make time to kick back and enjoy summer in the city as Ealing starts to bring film back home!