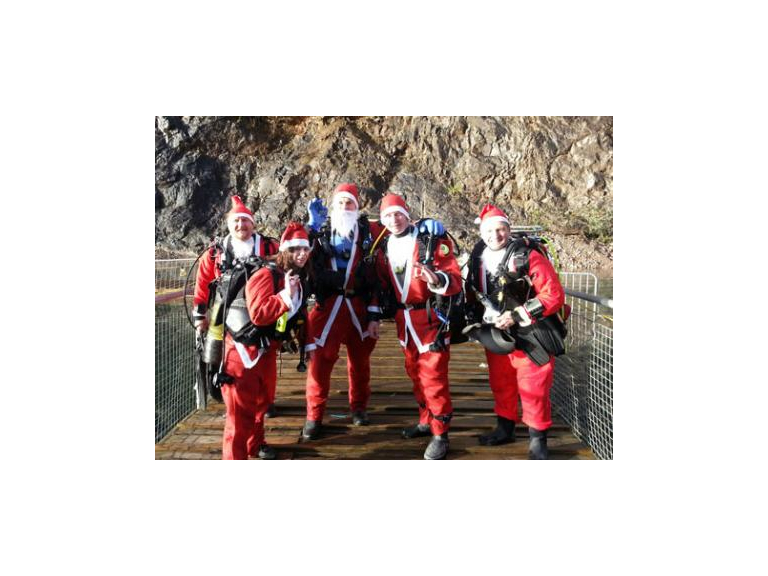 The centre offers a wide range of diving and other exciting activities suitable for the whole family. Now the owner, Darren Bryce, MBE is planning to invest nearly £1m in the site over the next two years.

The site which opened 8 years ago came about from Mr Bryce's charity work, for which he received an MBE after raising around £2.5 million over the years. Following a fundraising abseil at the site ten years ago he noticed its potential and decided to buy it. 'I always wanted my own place where we could do charity events,' said Mr Bryce, This month sees divers don Santa costumes to help the RNLI and DDRC Healthcare. Scuba Santas is often quoted as the "best dive of the year", the event has raised thousands of pounds for crew training at the RNLI breaking its own world record several times over in the process.

As part of the £1m, £150,000 has been spent on segways, electrically powered vehicles for people to ride on around some of its 55 acres, and £250,000 on 12 deluxe wigwam units for which planning permission was submitted recently. If granted, they will stand on the edge of the cliff face and overlook the quarry, where 15 different police teams, the fire service, coastguard and Ministry of Defence practise diving.

Other projects in the pipeline are a giant 3D swing, costing £85,000, which will give thrill-seekers 3G gravity over the quarry, and a £500,000 extension to The View cafe and bar to open it up to families and children.

A trawler, which spent years fishing in the North Sea, is becoming a new wreck-diving experience. It was picked up in a boat and brought up the river Severn and on to Beachley, and it has been at the centre for the past three weeks. It is hoped it will be in place by Easter next year after a competition to name it.

The site is the only one in the UK where you can dive to below 50 metres, which is why it is an important training location.

Eight years ago around 400 people came to the site each year, but now that figure has grown to a huge 14,000. It appeals to all ages  and the zip wire is a popular family adventure. Whether you are four or 94 you can have a go.' For more information check out their website here http://www.ndac.co.uk

I have recently purchased the best of the Forest of Dean and Chepstow from the previous owners Paul and Sharon James. I look forward to meeting as many of you as possible over the coming months and assure...