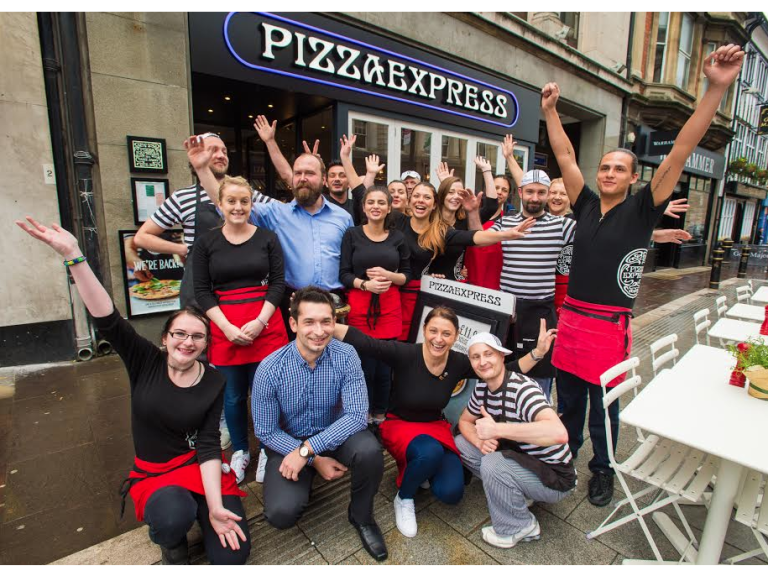 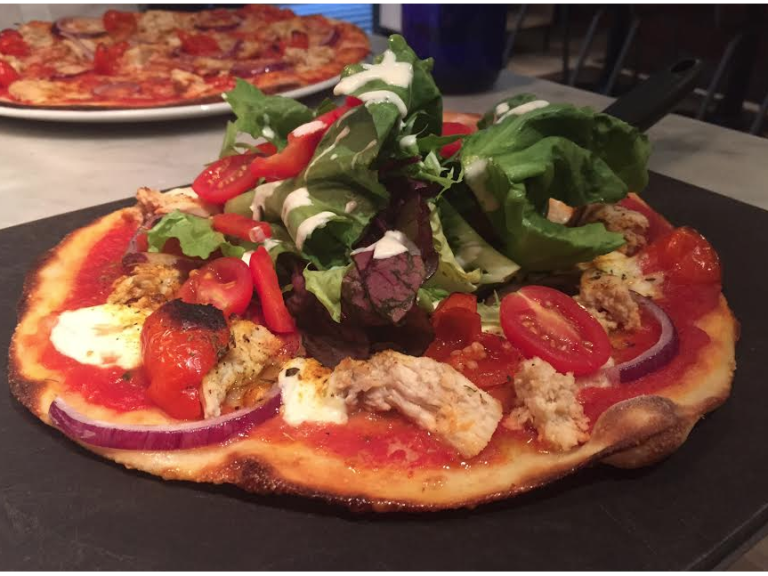 It was an awful rainy day but my mood quickly changed as I stepped into Pizza Express on Cardiff High Street, it was warm and welcoming, but not too warm that my glasses steamed up. (always annyoing when it rains)

The waitress, Valentina, greeted myself and Kevin with a smile and showed us to our table. Each PizzaExpress restaurant is individually designed – often using well known places, people or historical events from the area as the basis. The new artwork draws inspiration from the shapes of some of the former Cardiff Castle residents’ coats of arms, including those of the Tudors and the de Clares. The restaurant has a clean modern look but also features some traditional elements, it's a great place to enjoy some deliclous food with friends family or colleagues.

I had a latte to start as I was cold from the rain and it was lovely then our starters were served and again I was pleasantly surpirsed. Usually when ordering mozzeralla and tomatoes there is never enough cheese to go with the tomatoes! Instead I had a bowl of juicy plumb tomatoes and a large ball of creamy buffalo mozzeralla which was plenty. (There is no such thing as too much cheese) There was the right balanace of pesto also drizzled on the dish.

Kevin went for the Risotto Mio which was new to the menu and he said it was delicious, almost as good as his own! He is a big fan and couldn't resit trying it. He was expecting an OK risotto in the time it was served but the flavours were fantastic and totally exceeded expectations - maybe he should go for it as a main next time!

We both went for pizza for our mains, I am a pasta fan but when visiting Pizza Express it has to be for a pizza. I tried one of the Leggera pizza which has a hole cut out from the middle and filled with fresh leafy salad. All of which are under 500 calories! Which was great for me as I am now going the gym. The Leggera Pollo ad Astra that I chose was generously topped with chicken, light mozzarella, sweet Peppadew peppers, tomato, Cajun spices, garlic oil and red onions and was delicious, the spices give a great kick for the cold weather.

Unfortunaltely I had no room left for any dessert but I shall be returning to try out the 'Snowball Doughballs' which I was recommended by Valentina.

Be sure to give this Pizza Express a visit if you are doing your Christmas shopping in Cardiff, and hope you enjoy it as much as I did.

Manager, Les Galas, said, “We love our restaurant’s new look and have a friendly and enthusiastic team who are looking forward to welcoming everyone over a delicious pizza.”

PizzaExpress has been dishing up fresh, handmade pizza to Cardiff High Street since 1997. The new look coincides with the launch an exciting new menu, including Calamari and Risotto Mio as starters, an addition to the ‘Al Forno’ range, the Pennette Bolognese, and a new Formaggi 65 pizza cheese delight. Among the new desserts are Bombolini, small doughnut balls with a jam centre, served with gelato, and Salted Caramel Profiteroles Dolcetti.

For younger pizza-lovers, PizzaExpress’ Piccolo menu is full of tasty choices including ‘Create Your Own’ pizza, and starts at just £3.95. And for budding chefs looking to celebrate a birthday, a Pizza Making Party will see them transformed into pizzaiolos so they can stretch, toss and top their own pizza and play party games before sitting down to enjoy their culinary creations.