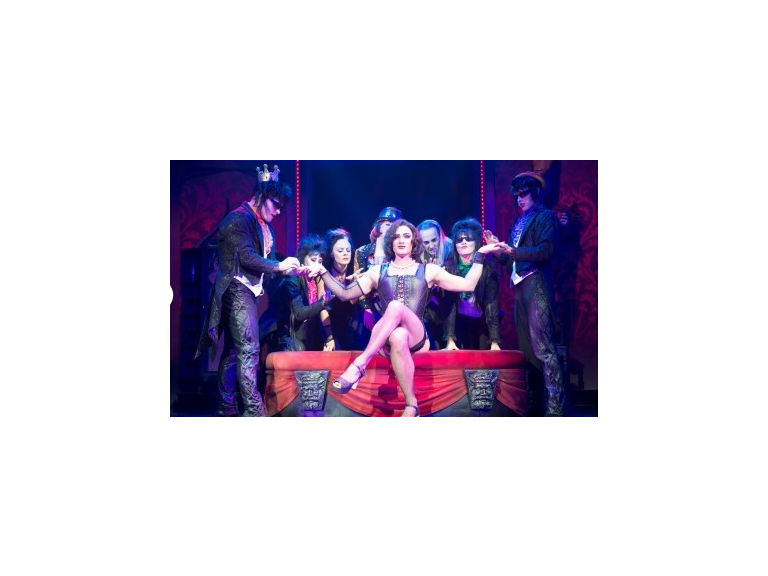 COMING TO CHURCHILL THEATRE BROMLEY 27 MAY – 01 JUNE 2013 TICKETS ON SALE NOW!
Produced by Howard Panter for The Ambassador Theatre Group

“Side-splitting, saucy and hugely entertaining, a truly enduring
and endearing masterpiece for everyone to enjoy”

“The Rocky Horror Show still has audiences rolling in the aisles. It’s nigh on impossible not to get on your feet and act like a creature possessed when The Time Warp strikes up”

Stage and TV actor Sam Attwater, who has appeared in Eastenders and Hollyoaks and starred in West End shows including Dreamboats and Petticoats, will play the role of Brad in The Rocky Horror Show 40th Anniversary Production, which is coming to Churchill Theatre Bromley between 27 May – 01 June 2013. Sam will appear alongside 2012 Strictly Come Dancing finalist and Tracy Beaker star, Dani Harmer, who will play the role of Janet. Sam and Dani will be joined by West End actor Oliver Thornton, who stars as the lead character of Frank ‘n’ Furter and Philip Franks, from The Darling Buds of May and Heartbeat, plays the Narrator.

Since its first appearance at the Royal Court Theatre in June 1973, Richard O’Brien’s The Rocky Horror Show has become the world’s favourite Rock N’ Roll musical. It has been performed worldwide for nearly 40 years in over 30 countries in every continent and has been translated into more than 20 languages. To celebrate the 40th anniversary, Christopher Luscombe has created a new production for a year-long UK tour.

This musical extravaganza will feature all of its famous musical classics including Science Fiction/Double Feature, Dammit Janet and of course, the timeless floor-filler, The Time-Warp.

The Rocky Horror Show tells the story of Brad and his fiancée Janet, two squeaky clean college kids who meet Dr Frank ’n’ Furter by chance when their car breaks down outside his house, whilst on their way to visit their former college professor. It is an adventure they’ll never forget, with fun, frolics, frocks, and frivolity, bursting with timeless songs and outrageous outfits. Directed by Christopher Luscombe, The Rocky Horror Show is a guaranteed party, which famously combines science-fiction, horror, comedy and music and encourages audience participation meaning, of course, getting dressed in your most outrageous fancy dress.

The Rocky Horror Show was first performed on 19 June 1973 at the Royal Court Theatre. It was an immediate success, transferring to three London theatres. It was transformed into a film in 1974 called ‘The Rocky Horror Picture Show’. This film adaptation took over $135 million at the Box Office and is still shown in cinemas around the world 38 years after its premiere, making it the longest running theatrical release in film history.
Many stars, including Russell Crowe, Tim Curry, Jerry Springer and Meatloaf have appeared in The Rocky Horror Show over the past 40 years.

Ready to thrill you with fun and naughty moments, O’Brien’s Rocky Horror Show is the boldest bash of them all. Be warned, this show has rude parts!

Note to Editors:
For details on press nights, production images and interviews, please contact Francesca Hoare at Churchill Theatre Bromley on 0208 290 8261 or via email francescahoare@theambassadors.com