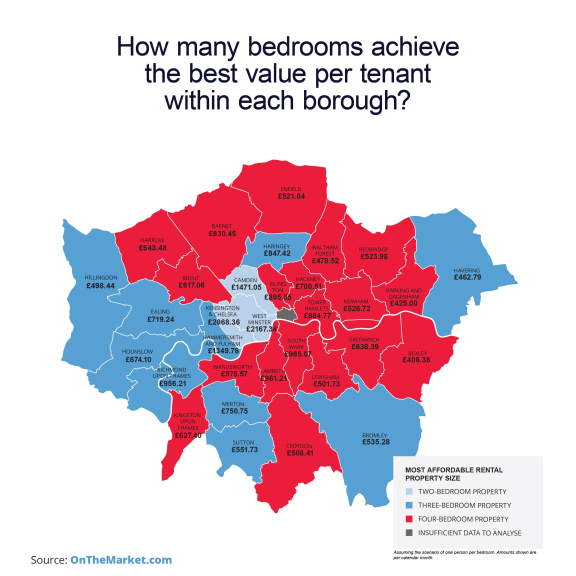 REVEALED: Bexley is the most affordable place to rent in London

Data revealed by property website OnTheMarket.com shows that living as a group of four in Bexley, South East London, is the cheapest way to rent in London.

Assuming the scenario of one person per bedroom, the data uses average private rental prices to determine whether one, two, three or four bedroom properties are the best value in each borough.

For a four bedroom property in Bexley, the monthly total rent is £1,633.52 but divided between four people, it is £408.38 each. This is 35 per cent cheaper than the average cost of renting a room in London (£629 per month according to the Government’s April 2017 – March 2018 Private Rental Market Summary Statistics).

Bexley station is situated in Travelcard zone 6 and is around 14 miles from London Charing Cross station - a journey time of 38 minutes while travelling on a Southeastern train. A daily return journey costs up to £6.23, £62.30 for a weekly season ticket and £239.30 for a monthly season ticket.

This table below shows the cheapest scenarios in each area of London. Bexley is the cheapest borough for each scenario. (Assumes one person per bedroom and shows the amount in monthly rent payable per person.)

The table below shows the most expensive scenarios in each area of London. (Assumes one person per bedroom and shows the amount in monthly rent payable per person.)

Across the rest of the capital, OnTheMarket’s data showed that in North London, living as a group of four in Enfield is the cheapest scenario at an average of £521.84 for each of the four tenants.

In South London, renting as a group of four in Croydon provides the best value. The average monthly rental cost for each of the four tenants is £508.41.

And in West London, living as a group of three in Hillingdon is the most cost-effective way to rent with an average cost of £498.44 per month for each tenant. While in Central London, the cheapest scenario is to live as a group of four in Islington at an average rental cost of £895.85 per person.

There are some boroughs where it is cheaper to live as a group of three instead of four. These are Haringey, Havering, Bromley, Merton, Sutton, Ealing, Hammersmith & Fulham, Hillingdon, Hounslow and Richmond upon Thames.

There are also some London boroughs where it is cheaper to live as a group of two (one bedroom each). These are Camden, Kensington and Chelsea and Westminster.

Of course, there are ways to cuts costs further. If couples choose to occupy a property, they reduce the monthly rental costs up to half.

The most expensive boroughs to rent were unsurprisingly in Central London.

“The data shows that at a time when tenants in the capital are becoming increasingly stretched, they can potentially reduce their overall rental outgoings by examining different cost scenarios based on the number of flatmates. The findings also highlight that considering moving to a different borough can save notable amounts of money for the difference of just a few miles.”

“With a journey time into central London falling within 45 minutes to an hour, at a time when two hour commutes are on the rise, it proves ideal for City workers. Bexley is also within an easy commute to the highly anticipated Crossrail Link (at Abbey Wood), which is due to open in December 2018, providing more time saving commutes.

“The suburban area of Bexley provides the best of both worlds with its close proximity to excellent schools, green spaces and affordable prices while also within driving reach of places such as Bluewater Shopping Centre and the centre of London under an hour away.”

Lewis Page, Lettings Negotiator at haart estate agents in Ruislip in Hillingdon, explains why three bedroom properties in this borough are popular among renters:

“Many renters consider house sharing as a cost effective way to live close to central London. Homes with three large bedrooms are a popular choice because it’s easy to apportion costs.”

“This research confirms what we’ve long predicted - that Bexley Borough is going to be in high demand for the next few years. It’s one of the reasons we’re opening two more offices in the borough (Sidcup and Blackfen), in addition to our existing ones in Bexleyheath and Welling.

“With the introduction of Crossrail into the area, improving the already vast transport links into the city, and the plethora of good schools and entertainment options, Bexley has proved to be a hotspot for those moving out of the humdrum of city life.

“This is mainly due to Bexley still being very much an affordable place to rent. In addition,

there aren't many boroughs that can offer the diverse entertainment and shopping facilities of Bexley. These include the Broadway Shopping Centre in Bexleyheath which has modern shops and food chains, complemented by Bexley Village which has a more alternative array of independent restaurants, boutique shops and bars.”

The above is provided by and published on behalf of onthemarket.com

A breakdown of the full dataset can be seen at https://www.onthemarket.com/content/revealed-bexley-affordable-place-rent-london/

This research analysis was performed on a sample of 41,000 one, two, three and four bedroom London properties listed on OnTheMarket.com in the past year. Studios were excluded and properties with a price per bedroom over £10,000pcm were also excluded. All results are based on the average cost of one person, per bedroom, per calendar month.

Figure of average monthly rental for a room in London is £629 per month according to the Government’s April 2017 – March 2018 Private Rental Market Summary Statistics.

OnTheMarket is the third biggest UK residential property portal provider in terms of traffic and has, with backing from its agent owners, developed unique sources of competitive advantage such as the "New and Exclusive" property listings.

Launched in January 2015, the OnTheMarket.com property portal was created by Agents' Mutual Limited, a company limited by guarantee and founded in January 2013 by a small group of agent firms, with the objective of creating a new portal to challenge the dominance of Rightmove and Zoopla. Both groups were felt to be using their strong positions relative to their agent customers to impose significant price increases for their portal services.

The Agents' Mutual proposition of an agent-backed portal offering a premier search service to property-seekers whilst charging fair prices to agents quickly found support among a very wide group of leading independent agents across the UK. These firms funded the venture by way of loan note subscriptions and committed to list with the portal once it went live.

OnTheMarket plc was admitted to AIM on Friday 9 February 2018 alongside a capital raise of £30 million to support a new growth strategy for the business.

As at 3 July 2018, the number of contracted agent offices has grown, since the Admission to AIM of OnTheMarket plc on 9 February, from 5,500 to more than 9,500, which represents an increase of more than 72%. The Company believes that it has listing agreements with approximately 51% of UK residential estate and lettings agency branches.

Can chiropractic help with your sporting performance?
Sign up for offers
Sign up for what's on guide
Popular Categories
By clicking 'ACCEPT', you agree to the storing of cookies on your device to enhance site navigation, analyse site usage, and assist in our marketing efforts.
For more information on how we use cookies, please see our Cookie Policy.