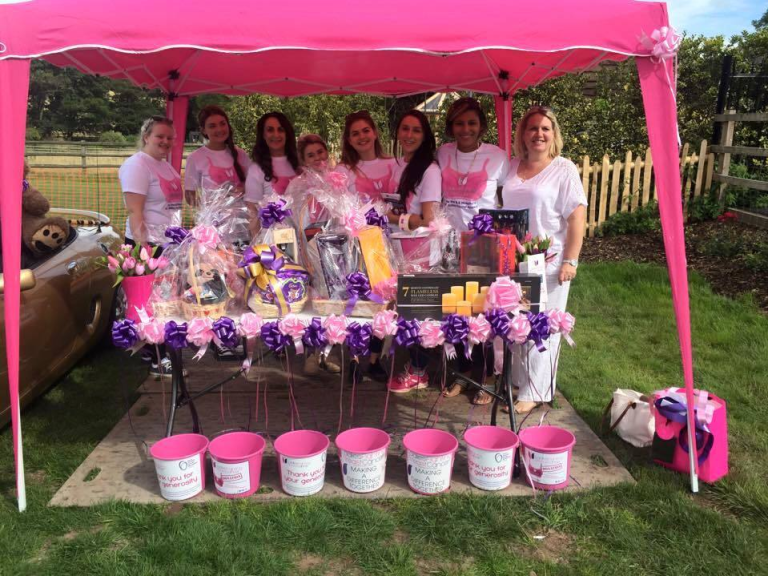 The Ladies Fighting Breast Cancer charity is a Birmingham based organisation that donates all funds raised to the local Queen Elizabeth Hospital’s Cancer Unit.

Established in 2000, Veronica Kumeta and the late Sue Macmaster decided to set up the charity following the breast cancer diagnosis of their friend Carol Knaggs. They had previously been involved in numerous fundraising campaigns, but what interested them the most was being able to decide exactly where the donations would go to. They now work exclusively raising money for the Queen Elizabeth Hospital in Birmingham.

Sadly, Sue was later diagnosed with breast cancer and unfortunately both Sue and Carol lost their battles. Despite the devastating events, Veronica, ever more determined, continued with the charity along with a group of newly recruited local female volunteers.

Over £1million has been donated by Ladies Fighting Breast Cancer to the Queen Elizabeth Hospital since the year 2000. This has enabled the hospital to purchase new equipment and facilities such as a Mobile Mammogram Trailer, scanning equipment, a Cooling Cap that helps reduce hair loss during treatment, and a Faxitron X-Ray Machine.

Why Ladies Fighting Breast Cancer Do What They Do

Did you know that 1 in every 8 women here in the UK will at some stage develop breast cancer? That in itself would be enough to drive anyone to help, but couple that with the fact that almost 12,000 people die every year from breast cancer in the UK, and you pretty much have all the elements you need to make a change. At least that’s what the ladies of LFBC believe! They strive to make the difference to people’s lives by putting the money in the right places, and because of the efforts of LFBC and others like them, while the number of people being diagnosed with breast cancer is increasing, the survival rates are improving!

Donating to any charity that you know can make a difference is rewarding in itself, but when you can physically see where the money has gone and what it has been spent on is a different ball game entirely. When raising money for Ladies Fighting Breast Cancer, you know that the money is given solely to the Queen Elizabeth Hospital in Birmingham. Big plans are afoot for this charity though, on top of already raising £1million pound that has been spent on equipment for the cancer centre, they are now in the process of raising a further £1million to fund future ‘soft services’ for patients which include amenities such as hair salon, beauty treatments and bra-fitting services.

Our Work Is Making A Difference