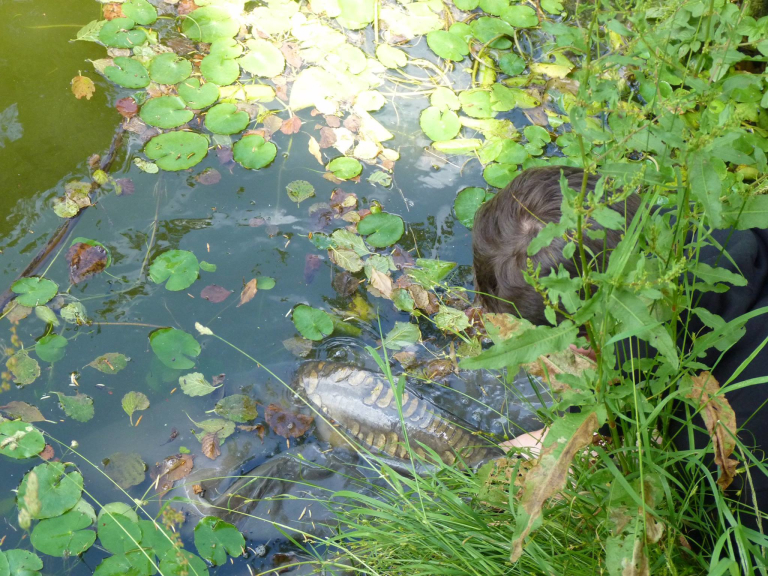 Hey everyone its Luke here! First of all I want to apologize for the lack of blogs over the month or so. As many of you will know Riki and I have been in our final stages of school. So recently we have been finalizing a bit of coursework and been very busy! But the good thing now is that we have finished school! We have a super long summer holiday ahead of us, which means only one thing! Lots of fishing! A few weeks ago Riki and I headed down to Newton Park on Friday 27th June for a day’s fishing. It was our first ever session on a weekday, and we were expecting big things! The weather just screamed Carp, and we were hopeful of catching a few fish! The day was very overcast, with little wind and possibility of a few showers.

We arrived at the lake fairly early in the morning and meet up with our friend Jake otherwise known as MarginMaster97 on YouTube. The swims we decided to fish were pegs 1, 2 & 3. Riki was on peg 1, I was on peg 2 and Jake was on peg 3. The plan for the day was to have a nice big social and hopefully land a few fish! The plan of attack for the day was to fish pva bags of pellet and a boilie tipped with corn as the hook bait. After catching up with Jake and setting up it was time to cast out! A few hours went by with not really much happening. The fish didn’t seem interested in feeding. Even though it was a very overcast day the temperature was quite humid and warm. Maybe the fish weren’t on the bottom, but in the upper layers? So it was worth putting on a zig for a few hours just to see if anything happened. An hour went by with nothing on the zig, as this session was a while ago i'm not too sure on the exact time scale, but just before mid-day Riki managed to break the first fish barrier and caught this little scaly mirror! Sometimes, big isn’t always best!

A few hours then past with nothing but the odd liner. I managed to hook one on the bottom but sadly the hook pulled and the fish came off. This was really disappointing, but these things happen and you just got to carry on! Shortly after me losing that fish, Riki’s rod came to life and he was in to his second fish! It put up an amazing scrap, but the thing that fascinated me most was the size of its tail!

He caught this one on his killer bait combination consisting of two different baits together, and it always produces for him on the hardest of days! It's so good the fish can never resist it! Maybe one day Riki will reveal it in one of our future blogs, but for the moment he is keeping this one to himself! Hahahaha! By the time we reached the last few hours of the session the fish count looked something like this: 5 fish to Jake, 2 fish to Riki, and I was blanking! But this increased my determination to catch! After nearly waiting 10 hours for my first fish I landed this common! It wasn’t the biggest of the day, but it sure was a stunner!

After catching this fish it went quite again throughout the evening... As it approached closing time,whilst were slowly packing away, Riki managed to nail one more fish! This fish was in the 18lb zone, and Riki's biggest fish from Newton Park so far! He nailed this one again on his killer combination!

And that was mainly all the action! It turned out to be a challenging days fishing, the fish weren’t interested in feeding, but overall it was a good social between the three of us! See you on the bank sometime, Luke