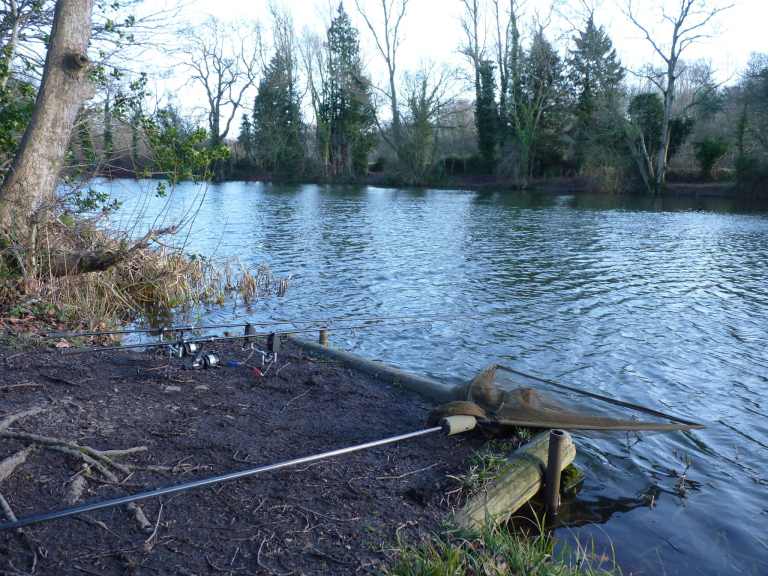 Hey everyone Luke here! What a windy Saturday we had on the weekend (Saturday 1st Feb), but we were out braving the weather like usual back on Hunstrete Lake. You probably have noticed we haven't caught a fish in quite a while, and that's because throughout this year we planning to fish the Main Lake on the Hunstrete Complex. It’s going to be our target water for this year, but don't worry we still intend to fish the runs waters, to get some fish on the bank in the summer as well as lots of night fishing planned for this year! As its winter and the fish aren’t biting, even on a runs water it is hard. So that’s why we are sticking out throughout the winter on Main Lake trying to catch one of the monsters in there, and building up our knowledge for the summer of the lake. We fished down the shallow end of the lake, once again on Saturday, both Riki and I. Lately (Probably because of the cold weather) everyone has been fishing the deep end of the lake (Bowl). We thought we would be different. They say that fish go to the deeper water, when its colder. But that’s not necessary the case in our opinion. When there is a lot of lines in the water (pressure), sometimes in our opinion its best to fish were there is less pressure. You can still fish in about 5ft of water in mid water down the shallow end, so it’s not like super shallow it’s still got some depth. I suppose at the end of the day it’s all down to personal preference and your knowledge of the lake (Which we are still building up). Back to the session… We both had one of our rods to the far margin towards an overhanging tree, and our other rods mid water. I was using a choddy on my right rod

which was going to the far margin. The bait I had on it was a small CC Moore white pop up. I personally preference the white pop ups. I truly believe that they stand out in any water, and grab the fish’s attention instantly. But it’s one of those baits that in my opinion won't spook the fish away compared maybe to a bright red pop up. On my bottom bait rod, I had a small trimmed down Supreme Baits Orange & Aniseed boilie tipped with Korda Slow Sinking Maize just to help it flutter down to the bottom, on just a standard hair rig. I have been trying out a new hook length material on my last couple of sessions. It’s the ESP Two Tone, it’s a fairly stiff hook link material. I have used it on my last two sessions and haven’t encountered any

problems with it. The one thing that is concerning me at the moment is if my lead sinks in the silt, my rig might not be presented correctly on the bottom, because of the stiffness of the rig. I'm still doing some more tests on it at the moment, but I would like to think that the design of the hook link was designed with that dilemma in mind. Apart from that one concern its quite a nice hook link material. The material that is my main hook length material is the Korda N Trap Soft 20lb in Silt. It’s a great all-rounder in my opinion, and by far the best I have ever bought! On the session we braved out the weather, at one point I thought my bivy was gonna fly away, because the wind was that strong! During the day we both had a couple of touch's on our rods, as well as a number of beeps from the swans swimming past our lines, and that was all to really report from the session. Until the next time, Luke