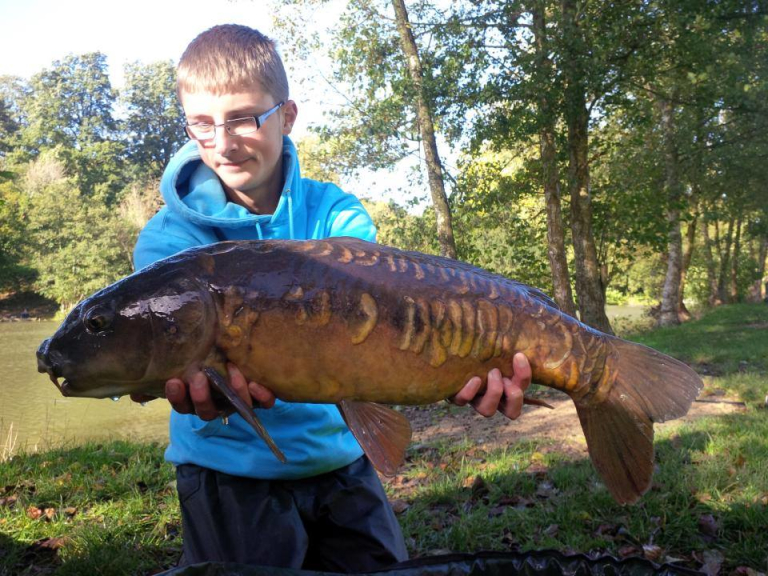 Hello there its Luke here! On the week commencing 28th October it was the start of half term at school! Which mean one thing, lots of fishing! It wasn’t until Thursday when we went fishing (a bit late in the week, but we had other things we needed to do) and we went pike fishing on the River Avon. On the Sunday night we had a storm and it went well into Monday as well. We were planning to go out on Monday but because of the weather we didn’t. But anyway back to Thursday… Riki and I met at 9:30am at our usual meeting spot, and began the walk to the local tackle shop. When we arrived we decided that we would buy a few rubber lures as they looked really good! After purchasing a pack of these lures we then set off to the Bathampton Angling Association stretch of the River Avon by the Boathouse Pub. It took us half an hour to walk there. Once there we found that the water was flowing fairly quickly and also was a very dark colour. At this point we knew it was going to be a hard day. We took a roaming approach, and moved down stream, whilst stopping at spots and casting out. Eventually we arrived at Saltford Weir, we had walked miles! We got picked up and then went home. We caught nothing… On Friday we went to The Hunstrete Complex to fish the Main Lake.

We arrived at 9am and got pegs 10 & 11. These pegs were looking brilliant, there was a bit of fish activity and to be honest they are really close together as well which is brilliant for us! We cast out and an hour in my bobbin slightly lifts and my alarm makes a couple of beeps which got my attention. We both looked anxiously… then the bobbin slowly dropped… After that little touch we were both pretty hopeful that it would materialise and it did! Five minutes later my alarm comes to life, the line goes tight and starts bearing around to the left, with line peeling off my reel! I pick up into it and nothing… Both Riki and I just looked at each, we didn’t understand. Shortly after re-casting that rod back out on the same spot, I see a fish bosh out on my spot! This bought my hopes back up, knowing that there were fish over my spot. But nothing ever happened. That was all of the action on Friday. On Saturday we went to Newton Park. On this session we were going to have a go at dead baiting. We bought some dead mackerel and put them on a treble hook wire trace, on a float. At Newton Park there are a fair few big Pike. We were hoping to catch one of them especially now that we have a new big pair of forceps!

On our other rods we had a standard carp set up. I was using a Korda Safezone Leader with a 2.5oz lead, and a hair rig. After 1 hour of pike fishing I decided to just drop my rod in my margin whilst we set up the bivy. Next thing you know my float shoots under! I drop the bivy, run over to my rod, casually tripping and nearly falling into the lake, yet I still managed to grab my rod. On the end of my rod I see this long thing. It was an Eel…

Being honest not really my couple tea, so we unhooked it and released it. After that incident I changed my rod back onto the Carp gear… By mid-day not many people had caught on the lake and most people were blanking… I decided to do something different to most of the people. I was almost certain that everyone was using boilies, so I put on a single fake pop up sweet corn which would waft about on the bottom. The weight of the hook still keeping it on the bottom. Shortly after this tactical change I heard a couple of beeps on my alarm from the bivy. I got up and looked at my rod, the line was tightening and moving so I picked up into it. It was this 15lb old Newton Park warrior!

I was well chuffed with this catch because I was only one of a couple of people that caught on the lake. It was fishing slow and hard... A few hours later Riki caught this 15.5lb long common (The photo doesn’t do it justice but it was really long!) on a Supreme baits Orange & Aniseed Boilie tipped with fake sweet corn.

Towards the end of the session I had another pick up on a fake bit of corn but unfortunately it came off… On Sunday, Riki had football so I had another session on Hunstrete’s Main Lake with James Collinson. Here is one of his most recent captures:

It was a great little social. It was looking great for a bite towards the end of the day with fizzing and fish showing over our spots. Unfortunately nothing happened but we both had a great time! We were both using Supreme Baits Spicy Seafood and Orange & Aniseed. On Monday the last day of the half term holiday Riki and I had a couple hours down our river, we managed to film a video which will be up on our website very soon! See you on the bank sometime! Tight Lines! Luke Nix