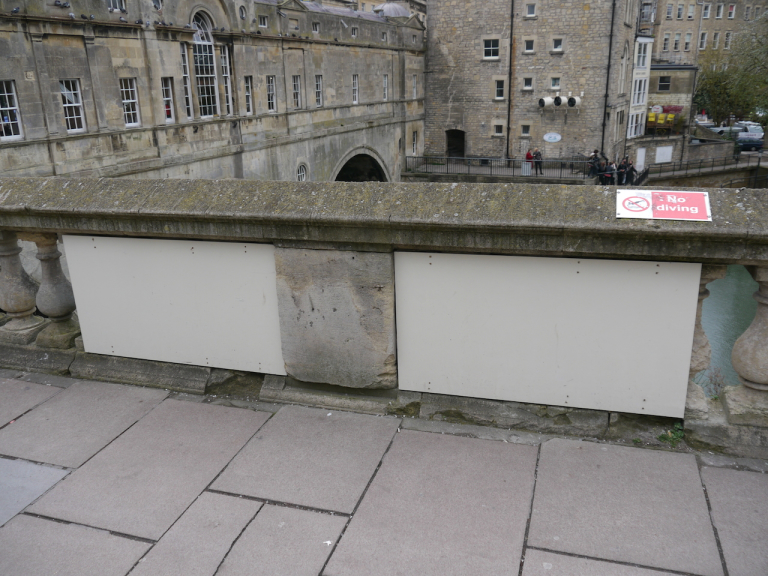 The city of Bath would appear to be featuring quite prominently at present within the pile of applications now under consideration for sizeable grants from the Heritage Lottery Fund.

Bath Abbey, the Cleveland Pools and even Sydney Gardens are all in there hoping for a financial break that will either help improve facilities or allow a new lease of life.

I wish all three projects well. The Abbey should hear something early next month.

In the meantime l fear another iconic spot within this World Heritage city will soon be crying out for major attention.

Have you noticed how boarding is creeping along the balustrade at Grand Parade? It's a location where thousands of tourists each year pause to take pictures of Pulteney Bridge and Weir. The turned stone pillars - suporting the balustrade - would appear to be badly eroded.

While Bath and North East Somerset Council is currently searching for high profile restaurants to help achieve the re-birth of the colonnaded area beneath this important walkway - one wonders if that regeneration is also the hoped-for event that will pay for the stone balustrade above it to be repaired.

In the meantime why not start a sponsor a pillar scheme? Anything would look better than the boarding.

Also - when the sign-writer has finished re-doing the sign at The Boater pub - maybe he would come and re-do the Grand Parade sign for B&NES.

Ex television and radio presenter and now Director of The Virtual Museum of Bath - www.virtualmuseumofbath.com - an on-line daily record embracing all developments in the history and heritage of the city...