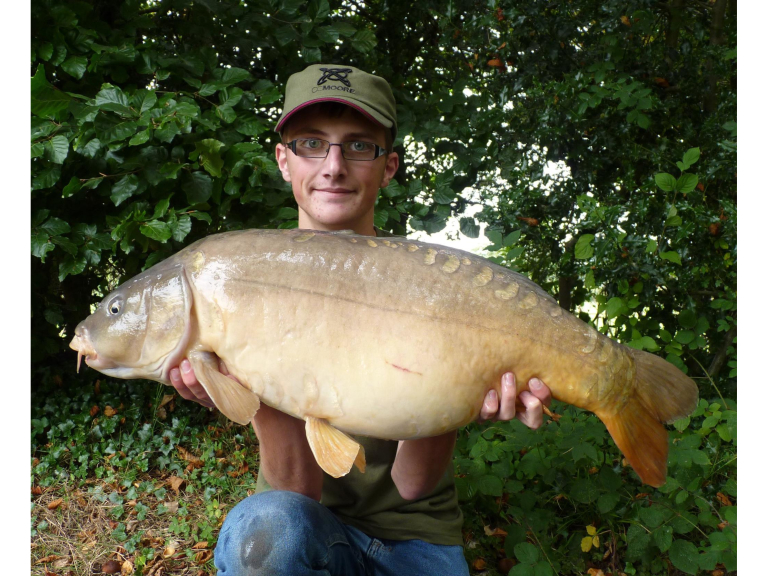 Hi everyone its Luke here! On Saturday (27.09.14) I headed back down to the Hunstrete Complex to fish the Main Lake. Its a lake that I am focusing on quite a lot at the moment. From previous blogs and from our social networking, you will understand that I have generally been fishing it both days on the weekend. On Saturday I turned up at the lake fairly early at 8am to take a good walk around the lake and choose my peg for the session. I had three pegs in my mind initially which were pegs 6, 7 or 8. So on route I dropped my kit off in 8 and carried on my walk looking for any signs of feeding fish. I generally like to start every session by taking a walk around and having a chat to the other anglers to see whats happening. After bumping into my good friend Huw, well over a hour passed before I got back around to my swim. I had concluded from my walk that not much was happening around the lake, and I decided to stay in peg 8. The weekend before it produced a fish for our team member James, so I was going to try my chances!

I managed to get both rods out for around 10ish. It was now a case of playing the waiting game! Shortly after getting my rods out Jak arrived to join me on the session and he hopped into peg 7. For Jak it was only a short session as he had to go early, but he had made it out for a couple hours! Two hours later I was sorting out my tackle box, giving it a good tidy up when I noticed something very strange. My mid water rod bobbin had dropped all the way down, and the line had gone slack. I had no indication on my bite alarm at all which was strange... It might of been because I wasn't fishing a very tight line and the line might of not been quite in the "V" where the line goes in the Delkim. I walked over to my rods and decided to pick up into it to see if anything was there, but there wasn't... very strange! Being totally honest I was a little bit gutted about that, because it might of been a fish... But that is fishing for you, so I re-flicked back out my rod onto my baited spot, and hoped for the best!

Half an hour went by and I was having a chat to Jak on the edge of my swim. I then went to grab a drink from bag when next thing you know my receiver starts vibrating in my back pocket. I turn around to see my mid water rod's reel getting its line peeled off it. I pick up into it, and I'm onto a fish! Of course the first move the fish took was to try and take me into the big snag to the left of my peg. After putting a good side strain on the fish and keeping my rod tip literally on the lake bed I was determined to land this fish! I had lost a fish to this snag a couple weeks back and I was determined that this wasn't going to happen again! After a good battle between the fish and I, with the assistance of Jak, we got the fish in the net! I had put in 10 sessions for this fish, and as you can imagine I was buzzing!

Weighing in at 23lb 14oz a new mirror carp personal best for me! The fish fell for the trusty CC Moore Live System, on a bait combination with a Northern Special that I have been thinking about for a long time!

It was still early days in the session, only just gone past mid day! I flicked back out my rod onto the spot, put a few more freebies around it and was hopeful that there still might be fish feeding. That was all of the action for our session on Saturday, but we were back down the next day to put in the hours!

TheNext Day... Joining me on the session was Bath Angling's Jak and James! I decided to fish peg 7, with James in 8 and Jak in 6. The session was looking very promising for a bite, there was a lot of fishing showing. In the snag there were fish traveling in and then straight out which showed there was good bit of fish movement going on!

The day flew by with not much happening on the fish side of things, apart from a few liners here and there! It was another one of those sessions! There was the occasional fish that boshed out of the water in the bowl and that was really it.

Overall, a good weekend like always and it was nice to have a fish on the bank! I had put in the time, tried a few new rigs and I was rewarded with a 23lb 14oz new personal best mirror! Until the next time, see you on the bank sometime! Luke Nix You may have noticed on Facebook and Twitter we were asking for YOU! Yes YOU! To send in your pics, and we would pick one to feature in our latest blog! We are going to hopefully make this a weekly occurrence, so you could have a chance of getting YOUR pic on our website! In the photo below you see Carl Marchant with a personal best Tench he caught from Cheddar Reservoir at 6lb 14oz! Cracking fish Carl and well deserved!!