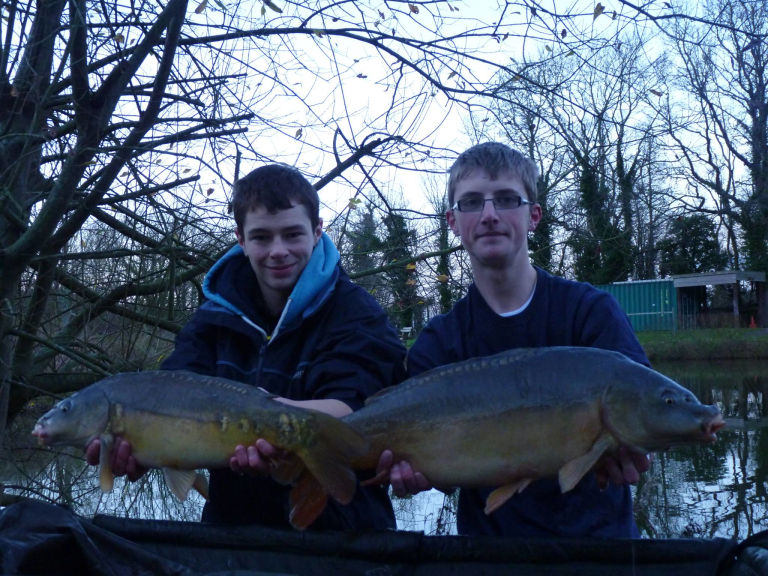 Hello there its Luke here! (Like always!) On Saturday 28th December 2013 we had a session on Hunstrete's Withy Pool! Over the last couple of months we have been focusing on Hunstrete's Main Lake, trying to master the lake and catch a 20lb+ but, we felt like having a bend in the rod, on a slightly easier water. Riki and I don't really fish Withy Pool much but we fancied a change. Usually we fish Bridge Pool a lot and have had great success, so we were hoping for a few fish on Withy. Also joining us on the session was our friend James. Now we are well into winter, our tactic for the day was to take a roving approach. We were going to pack as light as possible (and that is quite hard for us, always taking to much kit) and move around the lake until we found the fish. We started off the day on the straight bank of Withy Pool fishing the margins. We did this because the sun was beating down on the lake (nice bit of winter sunshine) and we thought that the fish would be in the margins where it would be a bit warmer. Generally fishing the margins provide a lot of success on Hunstrete's Withy and Bridge Pool's, so we tried this. We weren't tight in the margins but about right depth. After a few hours on these pegs with no success it was time for a quick walk around, looking for fish and baiting up a few spots on the way.

After looking around the lake for any sign of fish movement, we decided that it was worth a shot at casting towards the fish refuge. For any of you who have fished Withy Pool you will know that there is a Fish Refuge which is a safe place for the fish and full of snags. Riki, James & I talked it over and decided it was worth a go! So, we packed up and moved!

A few hours went by on the spot and nothing... not even a bleep or a sign of a fish. The fish were clearly not here, or they were, and not biting... We had a little walk around again, and went for a look around Bridge Pool. It also seemed that not much action was happening there as well. So it was quiet all round... On our previous walk about we had baited up a couple of swims with a small amount of Supreme Bait's Pellet, hoping to entice the fish in. So you'll never guess what we did? We packed up and moved again!

Once we set up down by the aerator end of Withy Pool, we all had one rod on the far margin and one mid water. It was about 3:30pm that we moved, and for half an hour we were all having a lot of touch's and some bites on our far margin rods. The fish were clearly there! At 4 o'clock I looked at Riki who was right at the bottom of the lake by the aerator with a bend in his rod. At first I thought he was snagged, so I shouted down to him and these were his words "Yeah, im in!". After reeling in, James and I ran down to Riki with the video camera and started the filming. When we got it into the net, it was around about the 8lb mark! Boyaah not a blank! As we were filming Riki and his fish, I quickly re-cast my far margin rod out, and the rod tip bend right around! I was into a fish and it felt half decent. As I was playing my fish Riki rested his in the margin in his net and we both had a photo together!

Then as we were packing up, Riki hooks into another fish back on the same spot! It went crazy in the last hour! Great bit of fun!

Unfortunately for James it was a blank but it was generally a hard days fishing. It took a lot of moving to find the fish, but when you catch a couple its all worth it! We videoed the session as well and you can watch it by clicking play on the link below!

It features our roving approach, touches on the bite alarms and all the fish of the session!

Tight Lines, See you on the bank sometime,