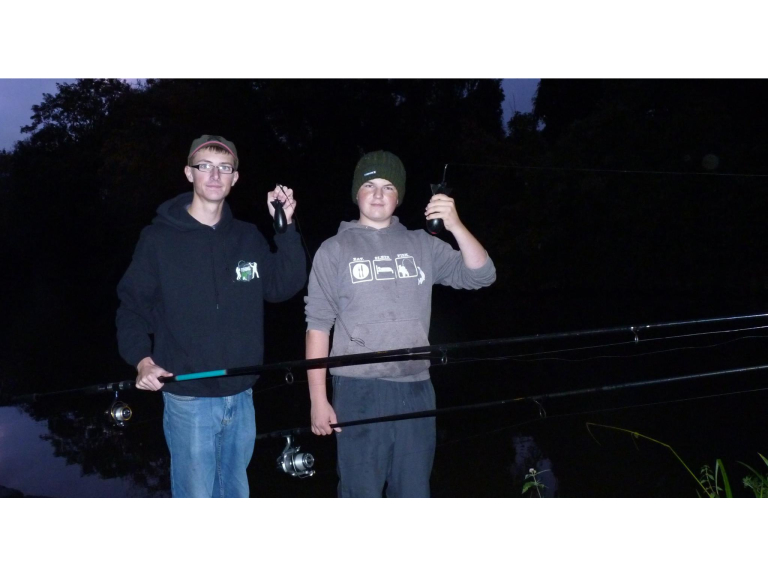 Hi there its Luke here, On Sunday I headed down to Hunstrete Lake and thanks to a very generous friend I was given a 10 litre bucket of fresh spod mix that was going to be used during their recent night match. I was sat in my swim thinking "What could I do with all this bait?" The thing was, it wasn't going to last much longer before it started to go off, so I decided that it was worth pre-baiting up a swim and trying to catch a river/canal carp. After having a good think I decided that we were going to do a short Canal Campaign. The reason for this was that with winter on the way and possibly a lot of rain to come, the flow of the river may be very strong. Therefore the bait would just be washed away!

I was sat down behind my rods as pictured above when I received a phone call from Bath Angling's very own Jak. He asked me if I wanted to join him on a local canal on Wednesday for a session, which was totally unplanned. It was like the carp gods had told Jak that I was thinking about pre-bating and he magically called asking me to join him on the session. After explaining to him about all this bait I had, we hatched a plan and that's when the Canal Campaign began! Monday (Stage 1): As on a Monday I have a day off college this was the day that we were going to go and pre-bait up a spot on a local canal. Jak already had a spot in mind and I headed off to meet him for 5 o'clock. After quite a long walk with my spod rod, a really heavy bucket full of particle, we arrived at the spot. We had a lead about to find some clear spots and to figure out the depths of the swim. Light was fading fast so we quickly clipped up our rods to our spots and spombed out the bait! Once all the bait was out stage 1 was complete!

Tuesday (Stage 2): On Tuesday it was time to rest the swim and hope the fish were being attracted to the area and feeding off our spots. Wednesday (Stage 3): On Wednesday it was finally time to get the rods out and wet our lines. I woke up nice and early determined that today was going to be the day that we caught a canal carp! After what was a really long walk to the canal with all my gear I finally arrived! I was there for 8:30am and Jak arrived shortly after. Within the first 5 minutes of being there a Carp boshed right out of the water over one of our spots! This was a real confidence boost, there was definitely at least one Carp in the area! After a sign of a showing fish, we quickly got our rods out on our spots. On one rod we were both fishing with a CC Moore Live System boilie tipped with Korda Fake Corn. On the other rod we were fishing with double pop up corn. The reason for these bait choices were that firstly we had baited up with a lot of particle, so the corn would fit in very nicely. We also put out about 1/3rd of a kilo spread of boilies, so boilie tipped with corn was a bait that was going to stand out amongst the boilies. After having the rods out for about 5 minutes a boat decided to go by, which wasnt a problem at all because we had out line back-leaded. About 10 minutes later we noticed that the current had picked up a lot of speed in a matter of minutes. First off all we didn't think much about it because we thought our leads were going to hold onto the bottom fine. But, after 30 minutes, with a lot of liners in this strong current, we decided to reel in to check our rods. This is when things started to go wrong... We reeled in to discover our leads were not on the same spots and they had a lot of leaves on them. The current was proving to be a big problem. To be honest, I know there is a small current with a canal, but this was the fastest I had ever seen it! It didn't help either that there was a bridge that made the width of the canal slightly smaller, meaning that there was a lot of water pressure. The problem also with this strong current was that it was impossible to sink your line straight without it curving around with the flow of the current. After doing some investigation work, it turns out that the boat that went by us in the early stages of the session decided to not close the lock which links the canal to the river. This therefore resulted in a very strong flow... After one last attempt and 1 hour later we reeled in... Thanks to a member of the boating community deciding to not close the lock, it messed up our fishing! It was practically impossible to fish as everytime the rods were out the hookpoints were instantly covered with leaves. Either that or the leads were not gripping the bottom because of a strong flow. With no tackle shop nearby to by some bigger leads, sadly our canal carping adventure had come to an abrupt end! But, don't worry, we are more determined than ever to complete this quest! Keep an eye out on Bath Angling as we will defiantly be out on our local canal a lot more often! Apologies also about the lack of photos on this blog, sadly we have to keep the location of this spot a secret for a while, until we have finished fishing it. Paying a visit to Jacob & Jake down at Newton Park on Thursday!

On Thursday I was having a few text conversations with Bath Angling's Jacob, and also Margin Master from YouTube who were having a session down Newton Park. I decided to pay them a visit for a couple of hours! On arrival I had a nice long chat with Margin Master, I havent seen him in ages! He told me that the lake was fishing quite hard, and he had only had one fish at 14lb. After chatting to him for a while he managed to have a run! I must of been his good luck charm... He caught this little one!

After being his camera and net man for an hour, I went around to Jacob to see how he was getting on. He had only had one fish, but once Lucky Luke arrived it brought him a bit of luck and he managed this little one! To be honest with the scrap it gave Jacob, we had visions of it being a lot bigger!

Anyway, see you on the bank sometime, Luke Nix